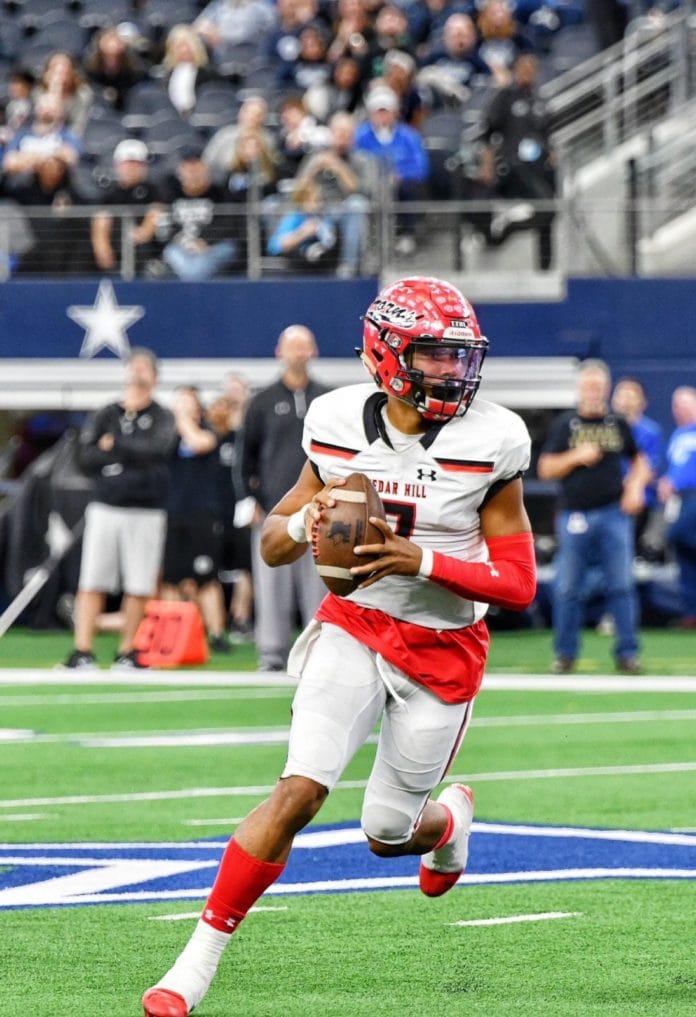 CEDAR HILL, TX – Kaidon Salter was sitting in McGhee Tyson Airport– 862 miles northeast of Cedar Hill – when he heard that classes would be cancelled the week after Spring Break due to COVID-19.

The Cedar Hill High Class of 2021 Quarterback was in eastern Tennessee to visit the University of Tennessee campus as a week-long series of college visits, which also included visits to Auburn, Georgia Tech and South Carolina.

Upon returning to Cedar Hill, he learned that CHISD would be closed indefinitely. That meant academics would shift to Flex Learning, and there wouldn’t be any Spring Football Practice.

Salter, a 6-foot-1, 185-pound quarterback, has adjusted to the change well.

“I have great support from my parents, and I do all of my schoolwork via laptop,” Salter said. “This has given me time to choose a college and do more research on the schools.”

Salter has narrowed his list of colleges to 11, but he said the favorites among those are Auburn, Baylor and Tennessee – not in any specific order.

Salter said he’s taking a close look at the academics, the university environment and the coaching staff at each university. His career goal is to become a teacher and coach, preferably at the high school level. “I just love being around football,” Salter said.

Salter had plans to visit more colleges, but due to COVID-19, he’s communicating with coaches through phone calls and emails.

“I’ve had a chance to visit most of the schools that I wanted to visit,” Salter said.

He expects to announce his college decision within a month, and he hopes to graduate from Cedar Hill High School in December, to enroll in spring drills at his university of choice, in January 2021.

With all school district facilities closed, Salter has had to call an audible in terms of his training regiment. He’s been able to lift weights indoors and train outdoors when it’s not raining outside.

In addition to football, Salter was disappointed in the loss of the Track & Field season. He competes in the Long Jump and Triple Jump and hoped to make his UIL Class 6A State Championship debut.

Salter grew up in Desoto, and most of his family members are DHS Eagles. He’s thoroughly enjoyed being on the Longhorn side of the “Battle of the Beltline.”

“My dad is a Desoto Graduate, as are both of my older siblings,” Salter said. “Last year, my siblings wore their Desoto Letter Jackets, but they sat on the Cedar Hill Side.”

Last season, Salter led the Longhorns to a 9-3 record, District 6A-7 Championship and a thrilling 28-27 win over the rival Eagles in the regular season finale last November.

Cedar Hill is scheduled to open the 2020 season on August 28 at Rockwall. Last season, Rockwall reached the State Semifinals.

With the uncertainty surrounding COVID-19, it is impossible to predict whether the season will be played – full or partial – but Salter said he will be prepared to help lead the Longhorns to the 6A State Championship — 21 miles away at AT&T Stadium in Arlington.

“We most definitely have a chance at State,” Salter said.