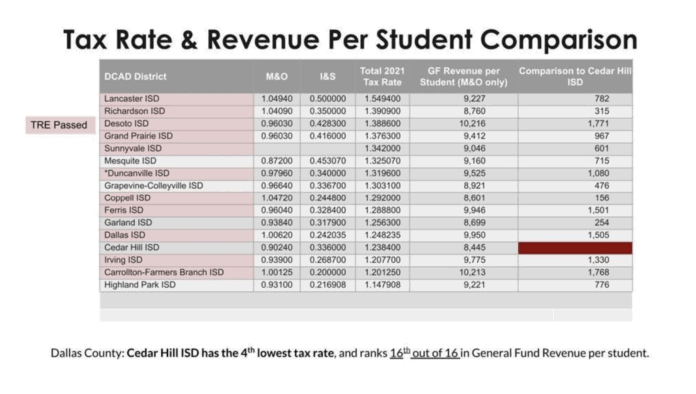 At a special-called board meeting on August 22, the Cedar Hill ISD Board of Trustees voted unanimously to call a Voter Approval Tax Rate Election (VATRE) and a school bond election for November. The CHISD Board of Trustees and Administration have been studying staffing needs, facility needs, and options to bring additional funding to
support educational programs for all CHISD scholars.

The VATRE would generate approximately $6 million annually for teacher pay and scholar programs, and the bond proposal includes safety and security updates, facility renovations and system upgrades across the district.

“Today is a very historic day for the Cedar Hill Independent School District,” Cedar Hill ISD Board President Robert Riggs said. “The Board of Trustees has followed the recommendation of the Longhorn Futures Committee and the District’s administration and placed two election orders on the ballot for Tuesday, November 8. We encourage all Cedar Hill citizens to learn more about the propositions on the ballot available at chisd.net and to register to vote by Tuesday, October 11.”

The school board’s vote comes after the district’s Longhorn Futures Committee made a recommendation in June to call a bond election that would include security enhancements at each campus, the closure of Bray, and address other academic and extracurricular programs.

CHISD currently has the lowest revenue-per-student in the area. Among Dallas County school districts, CHISD ranks 15 out of 15 and is not able to allocate as much money to teaching and learning as other districts. Through a VATRE, Cedar Hill ISD could generate an additional $6 million annually, which would be used for teacher and staff
salaries, pay raises, classroom materials and academic programs.

The VATRE will be listed on the ballot as Cedar Hill ISD Proposition A.

The bond election will be presented to voters in three separate propositions. Through a voter-approved Bond Election, Cedar Hill ISD could generate additional funding to renovate and update schools. An overview of each proposition and the types of projects included is listed below:

The bond would allow CHISD to continue offering instructional technology to scholars, would allow for lifecycle replacement of devices, and add technology to every campus including desktop computers, 1:1 devices for scholars and staff, battery backups and phones, and interactive panels and projection.

The bond would allow CHISD to replace the turf and track at Longhorn Stadium when it reaches the end of its useful life and is no longer in a condition for use.

· I&S is used to repay debt for capital improvements approved by voters through bond elections.

Based on growth of Taxable Assessed Values, Cedar Hill ISD may be able to issue the $218 million worth of bonds without a change to the I&S tax rate. However, if a tax rate increase is needed for the I&S budget, the estimated maximum tax impact of this bond is $0.005 (half a penny) for a total I&S tax rate of $0.3410 (per $100 of certified property value). If the half cent rate increase is needed, the earliest this would take effect is the 2023-2024 school year.

Cedar Hill ISD property taxes for citizens age 65 or older would not be affected by the school district’s elections as long as a homestead and over 65 exemption application have been filed with the Dallas Central Appraisal District.

Residents are encouraged to visit   and attend community presentations to learn more about the CHISD elections. Informational presentations will be scheduled and announced soon.

Anyone who resides in Cedar Hill ISD – and is a registered voter – is eligible to cast a ballot in CHISD’s November elections. Anyone not currently registered can find voter registration applications at many government buildings, inside CHISD schools, and online at the Secretary of State’s website.

To vote in the November bond election, voters must be registered by October 11. Early voting begins October 24 and runs through November 4. Election Day is Tuesday, November 8.