Hannah Ethridge Had An Uphill Journey

CEDAR HILL, TX- At this time next year, Hannah Ethridge will be studying atop a scenic hillside campus with a view of a clear blue sky and the majestic Pacific Ocean.

She will always remember the hard work and dedication that made it all possible – the
Advanced Placement classes, the long hours of completing homework assignments and the
determination to earn every scholarship dollar possible.

The Cedar Hill High School Class of 2020 Salutatorian has earned every achievement –
academically and as Captain of the CHHS Highsteppers Dance Team – during her time with the District.

The path to Salutatorian was not easy, which makes the elite academic honor all the more
meaningful for Ethridge.

Ethridge and her family experienced homelessness for three months during her junior year.
They stayed in various hotels, waiting for check-in times with the majority of their belongings in the backseat of a car.

Adversity Made Her Stronger

“It was a learning experience, and I didn’t let it bring me down,” Ethridge said. “It made me stronger.”

Ethridge knew, in order to keep her grades up, she would have to find a way to complete
homework assignments and projects. That often meant long hours studying in the hotel lobby.

“I couldn’t let that be an excuse to jeopardize my spot as Salutatorian,” Ethridge said.

That experience gave Ethridge perspective and convinced her that she’s capable of overcoming adversity.

Salutatorian was on her radar, shortly before she became a high school scholar.

“It’s been my number one goal since I was an eighth grader at Bessie Coleman Middle School,” said Ethridge, who started her academic career as a Waterford Oaks Elementary Kindergarten Scholar in August 2007.

As a freshman, Ethridge was fifth in the Class of 2020. She knew in order to have a chance to become Salutatorian, enrolling in Advanced Placement Courses would be necessary.

“I worked and worked,” Ethridge said. “The teachers have helped me and encouraged me.”
Cedar Hill High School Mathematics Teacher Jonathan Arrington said Ethridge demonstrated
the skills that will ensure future success.

“Hannah will go the extra mile and ask for help to attain a better understanding,” Arrington said. “It is good she has that academic perseverance because that is a key factor to success in college.”

Scholarships and success were the motivating factors for Ethridge. As a result of her hard work, she received a $70,000 grant to Pepperdine and was accepted into most of the schools to which she applied.

“She’s a perfect balance of extreme work ethic, focus and resilience,” Shameka said. “She’s a better version of me, and it’s fun to be her coach along the way. She has many competing priorities between dance teams, drill teams and being the older sister of three siblings. She really understood a concept so that she was learning, versus just getting a grade.”

Shameka remembered the time that Ethridge was competing in Barcelona, Spain and her
phone was stolen on the first day of the trip.

“It was a seven day trip, and she planned on completing so much homework during her down time and the plane ride,” Shameka said. “I tried to get her a replacement phone, but it sat on customs until the seventh day and never made it to her. It didn’t stop her.”

CHHS Spanish Teacher Lauren Taylor has watched Ethridge lead by example throughout her
time on campus.

“Hannah does it all with grace, poise, and has never missed a deadline,” Taylor said. “She
conducts herself in a manner unrivaled by her peers, showing respect and kindness to
everyone. In the three years that I’ve been her teacher, I have never seen Hannah be unkind or critical of her classmates or teachers. I have every confidence that she will grow up to be a successful, well-adjusted, and highly educated woman and leader.”

CAPTAIN OF THE HIGHSTEPPERS 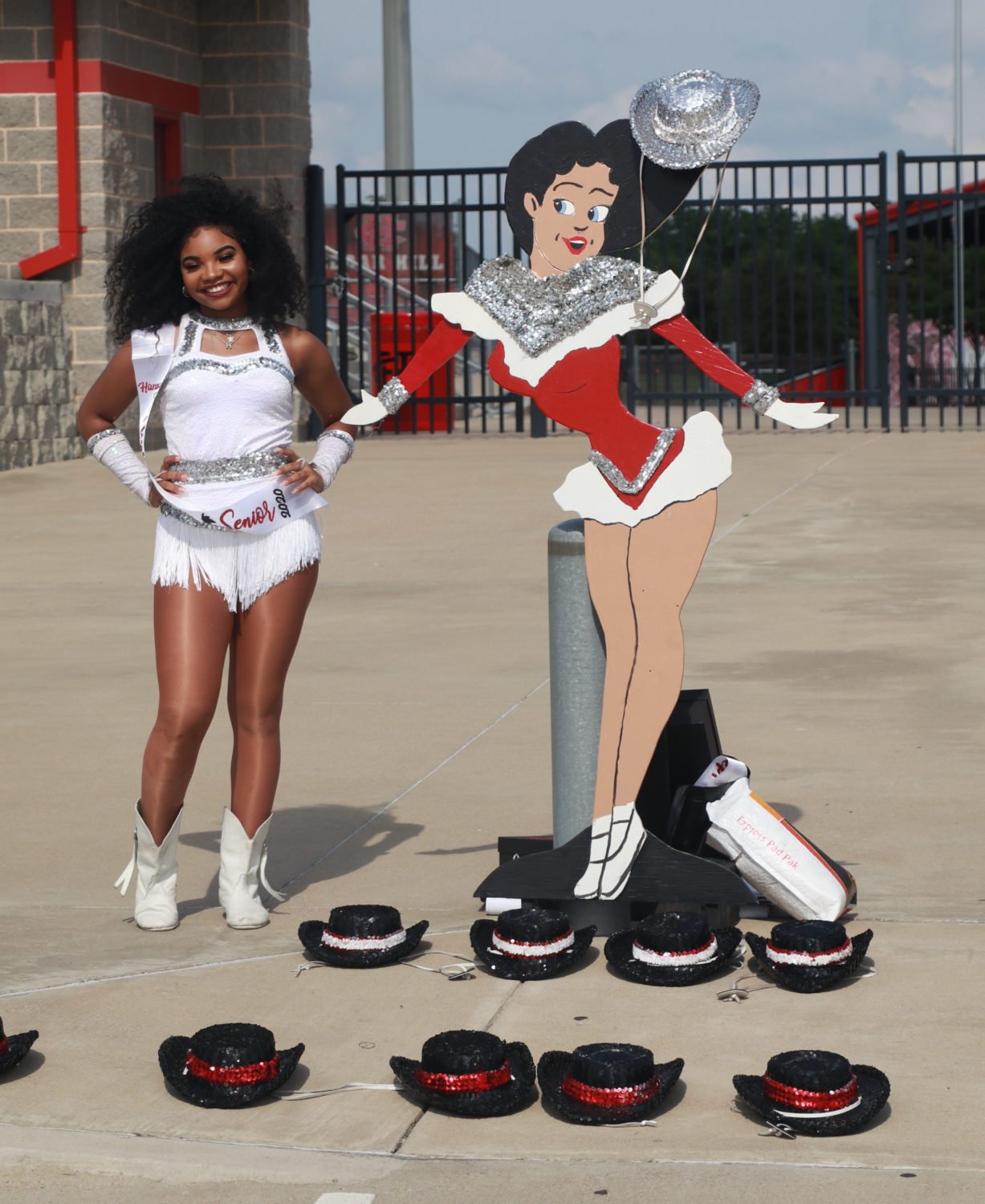 Ethridge joined the Highsteppers as a sophomore in the summer of 2017, a few months after her older sister, Kezia Kinchen, graduated as Highsteppers Captain.

“It was very, very exciting,” Ethridge said. “I looked up to the seniors on the team.”
She then became a Junior Lieutenant last year. That was an important position, because it’s
“the right hand person to the captain.”

Ethridge learned well, earning the Captain role as a senior and providing guidance to her
teammates on a season that culminated with a competition in Hawaii, in March.

“It’s been a very eye-opening and instructional experience,” Ethridge said. “Leading a group of nearly 40 girls teaches you a lot about the real world and teaches you about different
personalities.”

Highsteppers Coach Mila McQueen said Ethridge was an exceptional leader for the team.
“She is by far the best Captain I have ever had in my 12 years of directing,” McQueen said.
“She is able to motivate her team exceptionally well, because they have such a respect for her. They look up to her as a role model and dancer. She will certainly be hard to replace once she graduates. She is the perfect example of what a star scholar should be.”

The trip to Hawaii was the experience of a lifetime for Ethridge and her teammates. They learned about the COVID-19 pandemic shortly before they were set to return to Texas.
Fun, sightseeing, and dancing soon gave way to anxiety and uncertainty.

“We were getting phone calls from the District, saying school had been canceled for a week,” Ethridge said.

Little did they know at the time that circumstances would result in schools nationwide being
cancelled for the rest of the 2019-2020 year.

Nor did the Highsteppers know when they landed at Dallas-Fort Worth International Airport that they wouldn’t see each other for about two months.

The hiatus contributed to the emotion of the Highsteppers Senior Sendoff on May 15. The team’s 13 seniors received the same recognition they would have received had the team banquet not been canceled.

“At first, we were relieved to be on a calm schedule,” Ethridge said. “Now that it’s May, it’s kind of old not being able to go out to eat or go to the store without worrying about getting sick. But it’s all in God’s timing, and he has a perfect plan.”

Although the Highsteppers were a central part of Ethridge’s high school years, it was not her only dance participation.

She would regularly travel to other parts of Dallas County to compete, including Dance FX in Garland and Next Generation Professional Dance Studio in Mesquite.

In 2017, Ethridge became involved with Rebel Athletic, a dance/cheer modeling group in the Carrollton area. It was the group’s anti-bullying that caught Ethridge’s attention.

“Their anti-bullying platform has opened my eyes to many high school students around the
world who have been bullied,” Ethridge said. “We encourage them to be strong and to keep
going.”

Ethridge was accepted into several universities, but felt Pepperdine was the best fit
because of its location, Christian values and proximity to Los Angeles.

“My sister and I are both dancers,” Ethridge said. “We want to be based in California for career opportunities. My long term career goal is to be another Debbie Allen, have a chain of dance studios that I plan to expand globally. I want to give back to communities, especially less fortunate communities.”

Someday, Ethridge hopes to own and operate a drill team.

“I want to take dancing to a whole new level of creativity and choreography,” Ethridge said.
She said perhaps it will motivate children to find enjoyment through art and dance.

“I was a very shy kid and didn’t want to dance at all,” Ethridge said. “I watched my older sister (Kezia Kinchen) dance, and I started dancing when I was 12. She inspired me to pursue dancing. The Next Generation Professional Dance Studio encouraged me, and then I joined the Highsteppers. I want to keep going and keep training, so I can get better and better.”

Ethridge was proud to be part of the National Honor Society for two years. Of course, NHS is about high-achieving scholars, but Ethridge really enjoyed the community service events.

“I definitely enjoyed the days where we would be involved with elementary scholars and seeing them having fun,” Ethridge said.

Senior classmate Dedryc Hutchins has known Ethridge since their eighth grade year at Bessie Coleman in 2015-2016.

“She has a smile that will brighten up your morning,” Hutchins said. “Hannah is a very helpful person. She doesn’t care how it long takes, she is going to figure out a way to help.”
CHHS Student Council President Bailey Byrd valued her friendship with Ethridge.

“Whenever I fell short, she was there to help,” Byrd said. “She kept me on track and motivated me to do my work. If Hannah wants something, she’s going to get it through hard work and dedication. The world will be hearing about her sooner or later.”