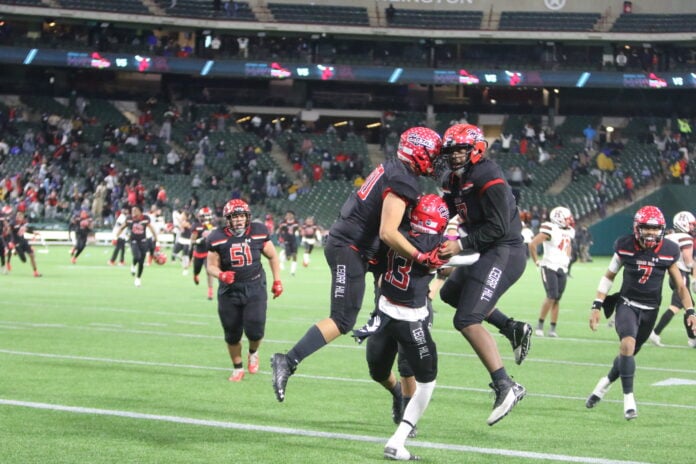 A Comeback For The History Books

If they play high school football at Globe Life Park for the next century, there may not be a more impressive effort than the Cedar Hill High School Football Team in Saturday’s UIL Class 6A Division II Regional Final.

The Longhorns (11-1) edged Rockwall Heath (11-3), 27-24 in overtime, to win the Regional Championship, for the fifth time in school history. Cedar Hill will face Denton Guyer (11-2) at 1 p.m. next Saturday in the state semifinals in McKinney.

The Longhorns managed their fifth comeback game of the season through sheer determination, defensively and then offensively.

Heath had the momentum and a 21-14 third quarter lead when they moved the ball to the Cedar Hill 1-yard-line.

The Longhorn Defense forced Heath to attempt a field goal, which they missed. If Heath had scored a touchdown, it would have boosted their momentum, perhaps irreversibly.

Salter Continues To Lead The Team With Precision

Salter, one of Tennessee’s best recruits at quarterback since Peyton Manning, wouldn’t let that happen. He came up with one clutch play after another.

Salter completed 20 of 37 passes for 266 yards, three touchdowns and an interception, and rushed for a team-high 83 yards.. He now has 43 touchdowns on the season – 30 passing and 13 rushing on Saturday, he eclipsed 3,000 yards of total offense.

Clemmer, a New Mexico State signee who made his Longhorn debut this season, had the best game of his Cedar Hill career, catching 10 passes for 164 yards and two touchdowns.

He caught the game-tying pass in the fourth quarter and the game-winner in overtime.

Clemmer has nine touchdown receptions this season, including five in the postseason. Saturday was his second two-touchdown game of the season (the first was two weeks ago in a 45-0 win over Tyler Legacy).

The Longhorn Defense held the Hawks – who had averaged more than 50 points per game – to less than 30 points for just the second time this season.

Cedar Hill improved to 5-1 all-time in the Regional Final.

Longhorns head coach Carlos Lynn is 5-2 in the playoffs as CH’s head coach and has a chance to earn his 80th overall victory as a head coach next weekend.

Guyer, which defeated Prosper, 38-31 in triple overtime on Saturday, is a familiar opponent for the Longhorns.

Last season, Cedar Hill lost to Guyer – the eventual state runner-up – twice, including a 50-41 loss in the second round of the playoffs.

The other 6A-II semifinal is Katy vs. Buda Hays.