Amon Carter Museum of American Art invites everyone to come “Party on the Porch” for their annual music and arts festival Sept. 14. Celebrate the reopening of the recently renovated Fort Worth museum. The free event featuring art-making, extended gallery hours, and live music is from 10 a.m. to 10 p.m. Saturday.

Party on the Porch

Several Texas groups perform live music, starting at 7 p.m. with Fort Worth musician Abraham Alexander. Austin favorites The Band of Heathens perform at 8:30 p.m. Activities begin at 10 a.m. as the Carter opens its doors to the public for the first time since renovating the galleries. They offer a variety of free creative experiences, such as exploring the new galleries and connecting with the Carter’s collection through hands-on activities. Guests can also find treasures on tours of the library and archives, or drop by the new interactive Family Pop-up Space in The Lounge. 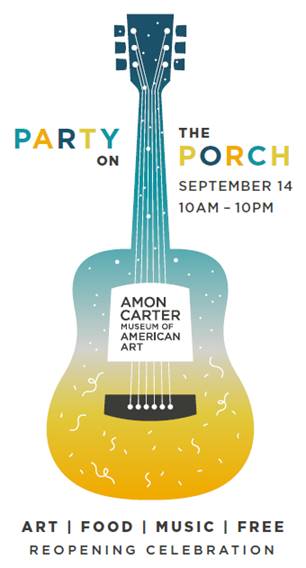 Carter Community Artists invite aspiring artists to help produce a large artwork created through visitor contributions. Inspired by Let’s Talk at the Carter, it’s a collaborative zine between the museum, children from the Fort Worth community, and Make Art with Purpose (MAP). Participants can create artwork in the style of Justin Favela, whose artwork commissioned by the Carter debuts at Party on the Porch.

In addition to the permanent collection galleries, five exhibitions open to the public at 10 a.m. Included is nationally touring Gordon Parks: The New Tide, Early Work 1940–1950. Scott and Stuart Gentling’s detailed illustrations of birds are also featured. Turn motion into part of a digital work of art by interacting with Camille Utterback’s Untitled 5 (Set in Motion: Camille Utterback and Art That Moves). Take a selfie in front of Justin Favela’s vibrant Puente Nuevo, inspired by the Carter collection and constructed from the material used to make piñatas.

During Amon Carter Party on the Porch, local food trucks will offer dining and beverage options for purchase. Carter members have access to a VIP area with free drinks and lite bites throughout the evening. For the event, Will Rogers Road will be closed between Lancaster Avenue and Camp Bowie Boulevard from 8 a.m. to 10 p.m.

Designed by renowned architect Philip Johnson (1906–2005), the Amon Carter opened in 1961. It houses a preeminent collection of American art including painting, photographs, sculpture and works on paper. The paintings collection spans early 19th-century expeditionary art to mid-20th-century Modernism and includes masterworks by artists such as Frederic Church, Stuart Davis, Arthur Dove, Thomas Eakins, Winslow Homer, Georgia O’Keeffe and John Singer Sargent. Its one of the nation’s major repositories of American photography from the 19th century to the present. Carter holds the archives of luminaries such as Laura Gilpin, Eliot Porter and Karl Struss. It is also home to nearly 400 works by Frederic Remington and Charles M. Russell, the two greatest artists of the American West. Admission is free. Open: Tuesday, Wednesday, Friday and Saturday 10 a.m.–5 p.m.; Thursday 10 a.m.–8 p.m.; Sunday 12–5 p.m. Closed Mondays and select holidays.