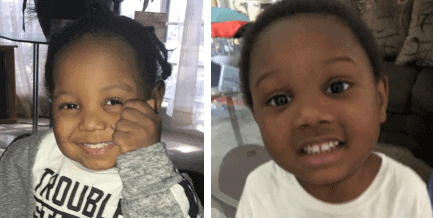 On June 21, 2021, at approximately 1:30 p.m., Seven Jeter, a two-year-old Black male, and Curtis Jeter, a four-year-old Black male, were last seen on the 5900 block of Highland Village Drive in Dallas, Texas. Seven Jeter is described as approximately 30” in height and weighing around 25 pounds. He has black hair, brown eyes, and was last seen wearing a white onesie with red and blue rockets on it.

Curtis Jeter is described as approximately 35” in height and weighing around 40 pounds.

He has black hair, brown eyes, and was last seen wearing a white and light blue onesie designed like an astronaut outfit. Seven and Curtis were last seen in a gray, late 90s model Cadillac sedan with body damage to driver side rear quarter panel. It is believed Curtis Everett Jeter, a suspect in a homicide, has possession of Seven and Curtis. Seven and Curtis are believed to be in danger and need assistance.