Home Entertainment A Look At Why “The Chosen” Chose Midlothian For Filming
2.3K shares

“The Chosen,” the popular television show about the life of Christ has, well, chosen to bring Midlothian into the production. Season 1 was the #1 highest crowd-funded entertainment project of all-time, raising $10 million from over 19,000 people according to their press kit.

Season 3 of the series, the first multi-season story of Christ’s journey, selected the Salvation Army Camp Hoblitzelle as its new site. The camp saw bookings drop to zero during the pandemic, so the agreement was perfect for all involved. The series has seven seasons planned to bring the story of Jesus to life.

The Chosen’s multi-year lease on the 900 acres of land was a win-win, giving the series a home and bridging the gap for the camp while it was closed.

Also, it helps that Midlothian, also known as “DFW’s Southern Star,” has the perfect landscape to help tell the legendary story of Christ, said Brad Pelo, President and Executive Producer of “The Chosen,” a product of Loaves & Fishes Productions.

“Believe it or not, Midlothian has a look that can pass for first century Israel,” he said. “We were invited by the Salvation Army to use some of the land adjacent to Camp Hoblitzelle, and we felt like the partnership with the camp would offer many benefits.”

Working since last fall, CRC Construction built a 30,000-square-foot soundstage that is the first such facility built in Texas for one specific production. Additionally, historically accurate recreation of the town of Capernaum covers a hilly area nearby. Other areas allow producers to create scenes in ancient Rome and other biblical locales.

The total facilities constructed will exceed $16,000,000, “The Chosen” officials state. The show’s move to a new home will bring long-term economic benefit to North Texas as cast, crew and significant numbers of extras travel to the area to take part.

“The community is excited to be the site for filming ‘The Chosen.’ Not only is it a wildly popular television series among our citizens, but having it filmed here is having a very positive impact on the area’s economy, including restaurants and hotels,” said Midlothian Mayor Richard Reno. “It is also attracting tourists to the area. We look forward to working with ‘The Chosen’ family and Angel Studios for many years to come.”

The Midlothian set is being used to depict scenes that would have taken place outside of Jerusalem proper, smaller villages, seaside and boat scenes and traveling/tent scenes. It represents what Capernaum may have looked like in the first century and is built on the shore of Camp Hoblitzelle Lake, which doubles for the Sea of Galilee.

Recently, 12,000 men, women and children were used as extras in various scenes during a four-day shoot depicting Jesus’ feeding of 5,000. Season 3 focuses on Jesus’ miracles.

Participants on those days came from 36 countries, including Russia, India, Pakistan, Malaysia, South Africa, Uganda, Australia, New Zealand, China and Iceland. One of the extras traveled 9,622 miles from Kuala Lumpur. From the U.S., extras came from all 50 states.

The oldest extra is 91 years old. The youngest is 7 weeks.

Filming of Season 3 will continue through September. The set is not open to the public and people are discouraged from visiting camp Hoblitzelle unless they are a guest of the Salvation Army.

Reno also noted “The Chosen” folks are partnering to provide a Film Conservatory at the camp. The film conservatory will run from July 16-21 and give campers a chance for hands on learning with set design, directing and more. 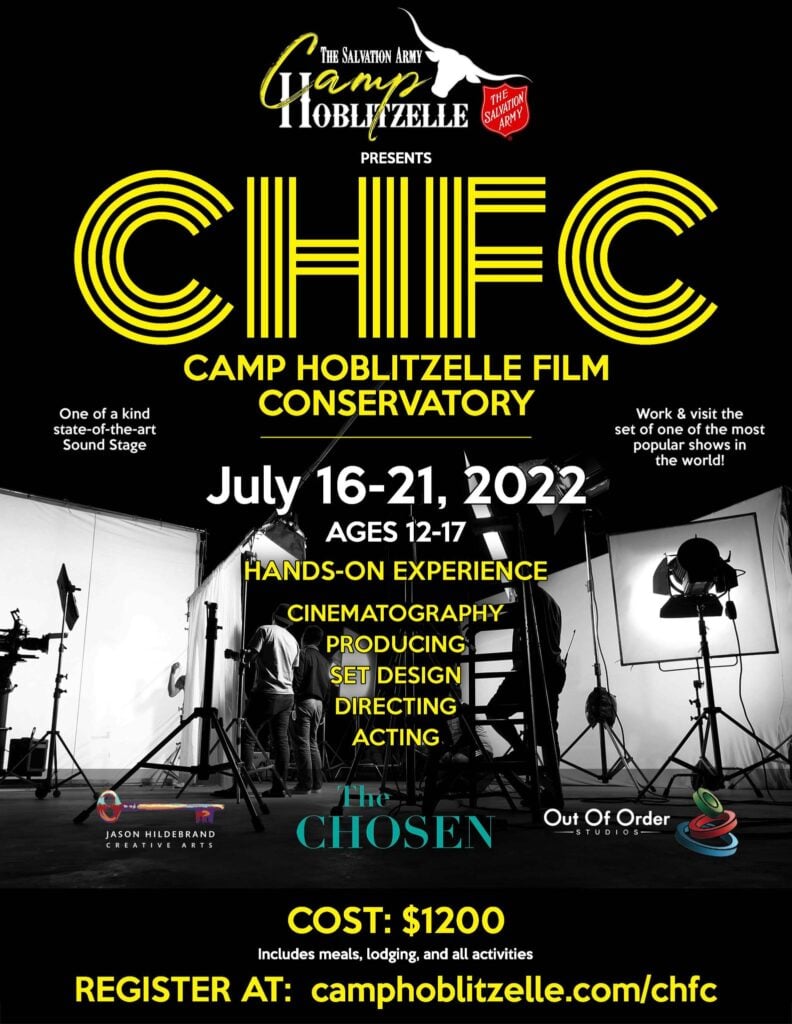 “I feel like Midlothian is being blessed by the production of the series, which is more than just entertainment,” he added.

When “The Chosen” is not filming, the facilities will be available for rent by other productions. A ribbon cutting for the new facility is planned for October.

The production has also used Capernaum Studios in Poolville, near Weatherford, for some filming.