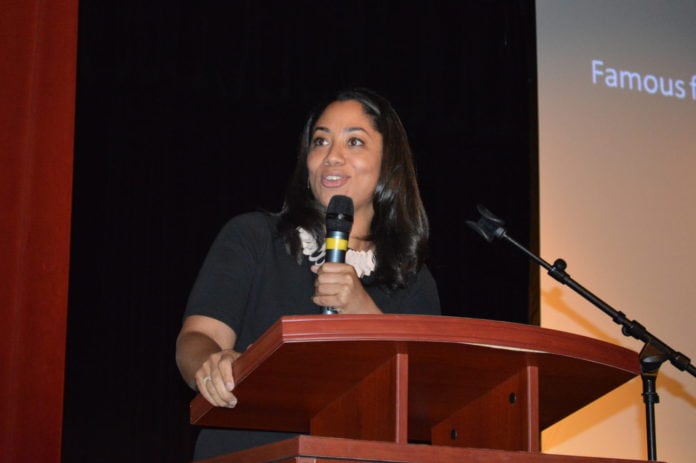 DESOTO—When DeSoto ISD faculty returned to their first day of work on Aug. 10, a nationally acclaimed guest speaker shared with them a wealth of knowledge.

“It became apparent to us that we had to think outside the box and think creatively and ultimately ban together,” said Elizabeth Dozier, former principal of Fenger High School in Chicago, as she shared the formula for turning around a low-performing school which had also been infested with gang activity.

“It was almost like the whole world was against us. It was really up to us to pull together and to wrap supports around our children and to look at them differently,” Dozier told DeSoto’s district employees in a packed auditorium.

“It wasn’t that there was anything wrong with our kids,” she said. “The parents were sending us the best children that they had. They weren’t hiding the good ones at home. You know what I’m saying? That wasn’t the case. They were sending us the best that they had. And that’s what shows up in our classrooms every single day and in our schools every single day, is the best that folks have.

“It’s up to us to really shape that trajectory, to shape the path that those young people ultimately go down,” said Dozier, whose success as an educator has been heralded in feature stories in such media giants as CNN and the Chicago Tribune.

The longtime educator was sharing with her captivated audience the passion that accompanied her approach to bringing the best out of students who weren’t necessarily held to the highest of standards or who came from backgrounds that weren’t conducive to adequate learning.

In 2009 Christian Fenger Academy High School in Chicago was identified as a failing school that needed to be saved. Dozier was hired and was given broad authority over an entirely new team. She also received a four-year federal grant to help turn the school around.

“The climate at the school was just absolutely abysmal — like massive gang fights in the hallways, 300 arrests that first year,” Dozier said in a CNN documentary. “We had to have, literally, two districts worth of police in the building for us to be able to change classes one day. It was a scary time in terms of like, ‘What happened to our children?’ ”

In 2015, Dozier stepped down from her role in the district, but not before making such a profound impact on the culture at the school that it earned her national renown and her students immense respect.

“Schools become huge drop-out factories, and it really has to do with issues that are happening at home that no one is really addressing at the school,” Elizabeth Dozier said in the documentary. “This is really the last stop for 98 percent of the kids here. If we don’t get them off into something else, there are no other options.”

“This is not really a black issue, it’s not a white issue, it’s not a Latino issue, it isn’t a South or a West side issue. But it’s really an issue of our children’s lives and fighting for their lives, and ultimately I really believe the fate of our city and our country,” Dozier said.

She told DeSoto ISD about restorative justice, a new way of thinking about how to support children who disrupt the educational process. Typically in Chicago, as in multiple cities nationwide, Dozier said, a child is suspended or expelled whenever he does something wrong.

Disciplinary action is handed down to the student without talking about why his actions are wrong. The practice of restorative justice empowers students to resolve conflicts on their own and in peer-mediated small groups to air their grievances.

“The reason I bring this up is because if change can happen at Fenger High School, I promise you it is possible anywhere in the United States of America,” Dozier said as the audience applauded. “I spend most of my time — a lot of my time — talking about that.” 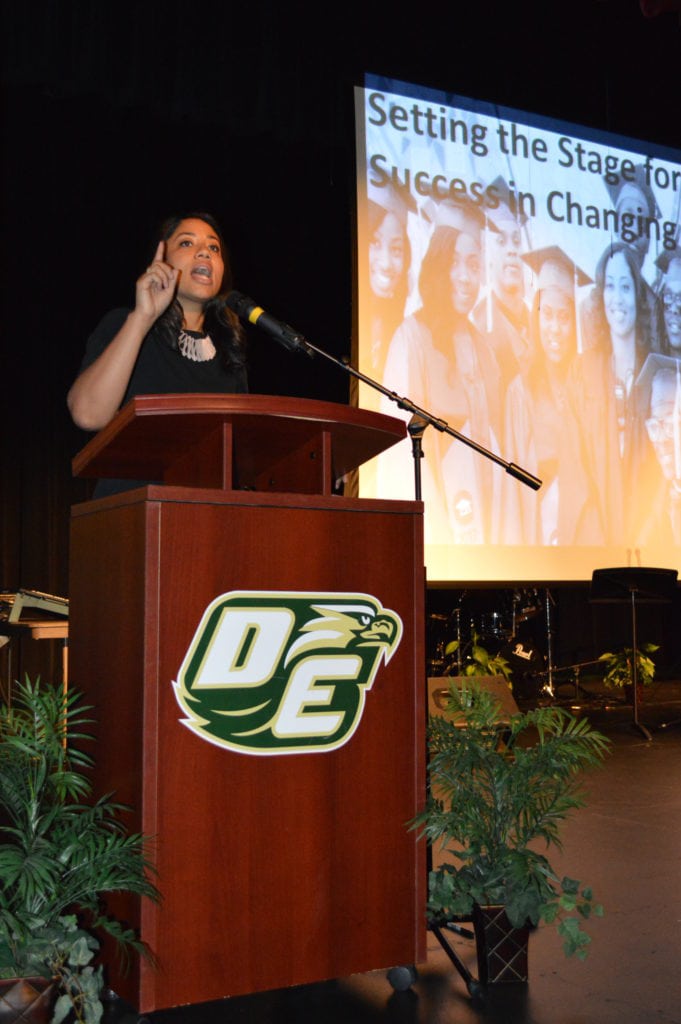 It is important for educators to view the children they teach the same way they would their own, noting that people are far less likely to give up on their own children when they perform poorly in school.

“If they were the same kids who are in our homes, the same kids we tuck in every night,” the question some teachers have asked concerning why it’s their responsibility to get apathetic students to care about improving academically would never come up.

Dozier said the most profound thing a teacher can do to enhance student achievement is to build a “relationship” with him.

“As you think about your most difficult student, the one you had last year or the one you’ll inevitably have this year … and they upset you and they act a fool, I would really encourage you to take a fresh look at that child,” Dozier said. “Think about how to build a relationship.”

With Elizabeth Dozier as its principal, Fenger’s attendance rate was the best in its district for three years and the school’s graduation rate reached 80 percent. The school where 300 arrests were made when Dozier started, saw the number of arrests go down into single digits by the time she left.