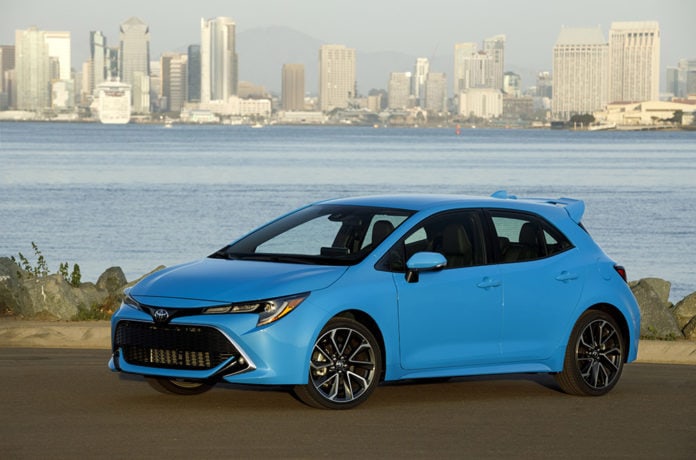 The 2019 Toyota Corolla Hatchback might be small, but it’s a big player! On sale this summer, it’s loaded with new features and brings more comfort, safety and technology. While it will attract everyday buyers, it’s sure to be a magnet to enthusiasts that will upfit this new platform for increased performance and more sports-minded styling. And, it comes with both auto and manual versions. So, it comes as no surprise that is was just named the 2018 Compact Car of Texas at the Texas Auto Writer’s Association annual Auto Roundup, where automotive experts evaluated it on a track against its competitive set. We drove it recently and it won points in our personal evaluation.

The new hatch replaces the outgoing Toyota Corolla iM, which originally started its life as a Scion (before the brand was retired early 2016), and will be joined shortly by a redesigned Corolla sedan. Scion models were known for being available in one basic trim level, but now that Corolla Hatch has become a full-fledged Toyota, it not only offers more tech but also comes in more trims, and with more options.

Ever since it was launched in Japan in 1966, the Corolla has had a well-earned reputation as a dependable, low-priced car — features that have helped make it the best-selling nameplate in the world. Built on the automaker’s New Global Architecture C chassis shared by Toyota’s Euro-market Auris hatch, the friendly little five-door will be available in SE and XSE trim levels.

Under the hood is a 168-horsepower 2.0-liter engine. Smaller, lighter, and quieter than 1.8-liter engine it replaces, it lowers the Corolla hatchback’s center of gravity and improves the car’s balance. Shoppers may choose between a six-speed “Intelligent” manual transmission with automatic rev-matching for smooth shifts or the all-new Dynamic-Shift CVT with 10 simulated steps, Sport Mode, and paddle shifters, as well as a launch gear that improves launch immediacy and smoothness — the world’s first in a passenger vehicle CVT, according to Toyota.

Toyota Safety Sense 2.0, which introduces features that enhance protection in an objective of zero casualties, is standard. This suite of features includes automatic pre-collision detection with emergency braking and pedestrian detection (as well as cyclist detection and improved low-light capabilities), intelligent cruise control, lane departure alert with road edge detection, and even auto high beams. The updated system adds lane-tracing assist, which offers steering assistance to the driver with his or her hands on the wheel; and road-sign assist, which can identify and warn the driver about stop, yield, and do not enter signs. With these improved security features, Toyota says the new Corolla hatchback also provides a better, more powerful driving experience. Blind-spot monitoring is standard on top-trim XSE and optional on SE models.

Our favorite takeaways? We liked its looks, roomy and utilitarian interior and the manual transmission that has shifts well and feels snappy and fun. We like the stock version. But being the enthusiasts we are, we’d love to upfit it for SEMA and we’re sure it will be one of the top models at this year’s show for upfitters.

More information regarding pricing and fuel economy will be available closer to its on-sale date later this summer.