Duncanville High School Valedictorian Kennedy Stidham had her educational career mapped out at an early age. “I wanted to be Valedictorian since I learned what that word meant when I was about seven,” Kennedy said.

Stidham has been a Duncanville ISD student since fourth grade, and she says the competition among her classmates motivated her to work hard. Stidham will attend the University of Texas next year. She plans to study biology and become a pediatrician.

“I really love children and I want to do something where I can see a tangible effect on people’s lives,” Kennedy said. “My ultimate goal is to have a private practice, but I’d like to work with Doctors Without Borders so I can give back.” 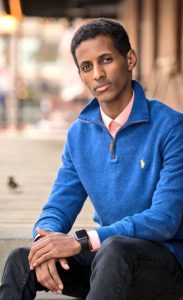 One of the teachers who made the biggest impact on him came to DHS halfway through his junior year. Kristin Glaeske, who teaches English, wrote the recommendation that helped Samuel get accepted at Stanford. She also worked with him on the written materials he submitted to the university.

“She’s one of those teachers you can really have an open dialogue with – have those really honest conversations,” Samuel said. “She was never afraid to pull me aside to tell me if I needed correction. It’s great to have people around you that can celebrate your achievements but can also point out when you’ve done something wrong. She was very instrumental in that.”

Samuel is planning to study Neuroscience and Public Policy as a double major at Stanford. Samuel intends to become a surgeon, but his goals stretch beyond medicine. One day, he said he would like to become Secretary General of the United Nations. Samuel wants to improve global health and assist in ending world hunger.