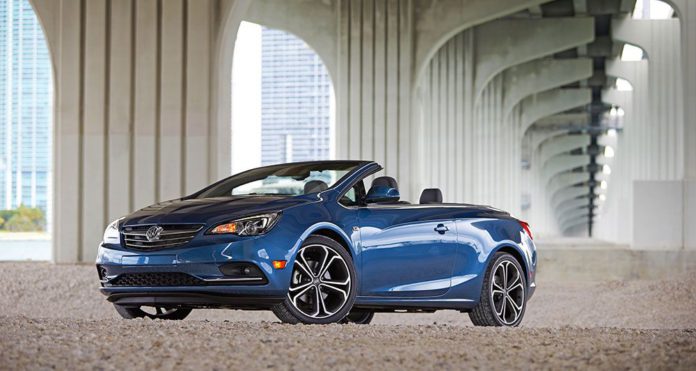 Key West, Florida: There’s nothing quite like open-top motoring to bring a sweet smile to your face, and the swath along Florida’s Keys from its southernmost tip to Miami is an ideal stretch of tarmac to catch a coastal breeze. Buick brought a cadre of testers to the Sunshine State to try out its all-new 2016 Buick Cascada.

We were thrilled to let the sunshine in the fun four-seater and let the cares of politics and inclement weather be carried away by the wind. And, that’s exactly what appeals to many buyers about the visceral experience of dropping your top!

Sold in Europe since 2013 as the Opel Cascada, Buick is bringing this ragtop 2+2 to the United States in an effort to capture some of the 125,000 annual convertible registrations-and the Houston region is one of the country’s prime markets. This is the first time in more than two decades that the premium brand has marketed a convertible in its lineup. Buick says the Cascada (pronounced “cass-KAH-duh”) targets a space most recently vacated by the Volkswagen Eos, Chrysler 200, and Volvo C60 convertibles.

Stepping up to the Premium trim at $36,065 adds a suite of safety and convenience features that include forward collision alert, lane departure warning, front and rear park assist, rain-sensing wipers, and automatic on/off headlamp control with tunnel detection. At the corners are 20-inch twin-spoke bi-color alloy wheels, wrapped in 245/40R20 all-season tires. No options are available.

The compact convertible is powered by a 1.6-liter direct injection, turbocharged four-cylinder engine mated to a six-speed automatic transmission; the combination produces 200 horsepower and 206 lb.-ft. of torque. An overboost pumps out 221 lb.-ft. of torque for a little more punch and power on demand. Fuel economy is rated at 20 mpg city, 27 highway, and 23 combined.

The engaging exterior has been designed with flowing styling that is tailored with a variety of body and side sculpture lines carved to emphasize its windswept and wedge shape from the signature grille and HID headlamps up front to the LED taillamps in the rear. Buick’s signature wing-shape LED daytime running lights give the Cascada a distinctive face; in the back are wing-shaped taillights and attractive chrome trim that punctuate the trunk. To reinforce the sleek lines of the body, the tail lights are actually constructed as part of the trunk lid, eliminating extra body seams; of interest; these require a redundant set of lights inside the trunk to indicate braking or reverse when the lid is up.

Inside, the comprehensively-equipped cabin reflects Buick’s renaissance with an appealing collection of soft-touch materials featuring authentic stitching and heat-reflective, leather-appointed seating. An added touch of luxury: electric safety belt presenters use telescopic arms to slide the upper front safety belt assemblies from behind the front seat into closer reach of front-seat passengers for easier buckling.

As every convertible should, the Buick Cascada boasts standard heated front seats and a heated steering wheel to add a few extra months a year of top-down driving for those in cooler climates. The power-folding cloth roof has multiple layers of thermal fabric to provide ample insulation against both weather and road noise. It goes up or down at the push of a button in 17 seconds. Plus, it can be operated with the car in motion at speeds up to 31 mph. An authentic vehicle for four riders, the rear seats are spacious enough to hold two adults -not just children, packages and pets.

Ingress and egress is made easier by front seats that power forward and back, automatically stopping when sensing the rear passenger’s knees. Those rear seatbacks can fold down to accommodate larger items in the trunk, which otherwise holds 13.4 cubic feet of cargo with the top up and 9.8 cu.-ft. with the top lowered.

A Convertible From The Start

The 2016 Buick Cascada drives like a solid front-drive sedan. Weighing in at close to 4,000 lbs., acceleration is not head-snapping. Zero to 60 mph is estimated at 8 to 9 seconds, but it moves quickly enough to feel slightly sprightly. Built as a convertible from the ground up on GM’s Delta platform, it boasts a rigid body structure thanks to high-strength steel, reinforced side sills, and pressed hardened steel in the A-pillars.

Buick is especially proud of the Cascada’s HiPer Strut independent suspension, shared with the Chevrolet Cruze and Buick Verano, which features specifically-tuned coil springs, a direct-acting hollow stabilizer bar, and hydraulic ride bushings to limit torque steer, isolate road inputs, and provide superior handling. We appreciated the European looks of the outside and the well-equipped and attractive interior, as well as its topless safety, with an active rollover system linked to the airbag system that deploys roll bars up from the rear headrests if the car begins to tip.