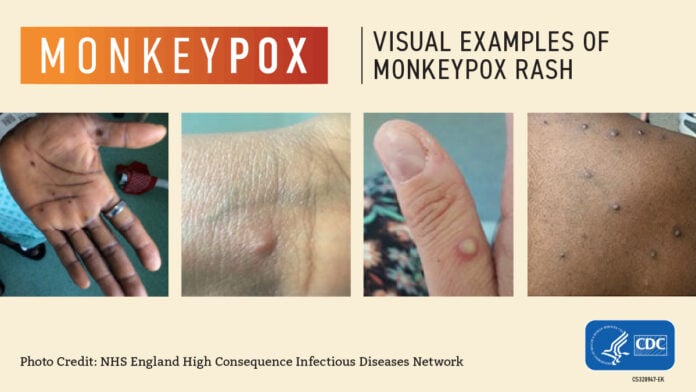 The threat of monkeypox to the general Dallas County population remains low. Monkeypox is rare and does not spread easily between people without close, personal, skin-to-skin contact. Men who have sex with men and who engage in high-risk sexual activities make up a larger proportion of cases identified to date. However, the risk is not limited to the LGBTQ community, and anyone who has been in close contact with someone who has monkeypox is at risk. The monkeypox vaccine is now in low supply and can only be offered to those with known skin-to-skin contact with a confirmed monkeypox case.

Yesterday, Tarrant County reported their first case of monkeypox. However, they did not state whether it was a case associated with recent travel or if it was suspected to be local transmission.

Monkeypox is spread through contact with body fluids, monkeypox sores, or shared items (such as clothing and bedding) that have been contaminated with fluids or sores of a person with monkeypox. Monkeypox virus can also spread between people through respiratory droplets typically in a close setting, such as people living in the same household or in a healthcare setting. Persons with monkeypox may develop symptoms such as a fever, swollen lymph nodes, and general body aches before developing a rash. People should seek medical attention if they develop symptoms of monkeypox.

Infection with monkeypox virus begins with an incubation period. A person is not contagious during this period.

Incubation period is roughly 1-2 weeks.
A person does not have symptoms and may feel fine.

According to the CDC, most people infected during this most recent outbreak are recovering from monkeypox in two to four weeks. The World health Organization has announced they will meet again next week to discuss steps to address the outbreak.

“The emergency committee for monkeypox will reconvene next week and look at trends, how effective the countermeasures are, and make recommendations” to countries and communities confronting the outbreak, the WHO’s director-general, Tedros Adhanom Ghebreyesus, said in a virtual press conference.