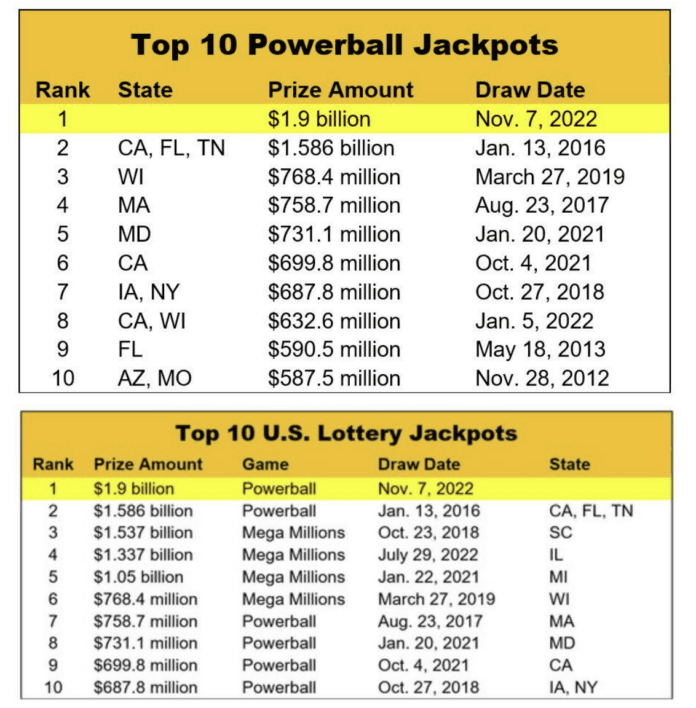 AUSTIN – Already a world record, the current Powerball Grand Prize has rolled to an estimated annuitized $1.9 billion for the Monday, Nov. 7 drawing after no one won the jackpot prize on Saturday night. With robust ticket sales pouring in across the country, Monday night’s drawing offers a cash value worth an estimated $929.1 million. If there is no jackpot winner for tonight’s Powerball drawing, the world record Grand Prize for the Wednesday, Nov. 9 drawing would grow to an estimated annuitized $2.3 billion.

“This is an extraordinarily unique time in lottery history, as the current Powerball jackpot is not only a world record, but is approaching an unprecedented $2 billion,” said Gary Grief, executive director of the Texas Lottery. “The sales figures that we’ve seen over the last couple of weeks show how excited Texas Lottery players are to play for an enormous Grand Prize like the one we’re seeing. As this jackpot run continues and becomes even more thrilling, we want to remind our players to play responsibly. It only takes one ticket to win. If it appears that you have the jackpot-winning ticket, we encourage you to sign the ticket, put it in a safe place, seek financial and legal advice and call the Texas Lottery to schedule an appointment to claim the prize.”

Texas joined the multijurisdictional Powerball game in 2010 and had its first Powerball Grand Prize winner in 2013 when Paul McDowell of Bells claimed the $40 million jackpot from the May 29, 2013 drawing. Texas had its most recent Grand Prize winner in February 2015 when TL Management Trust, Andrew Weber, Trustee of Austin, claimed a share of the $564.1 million Grand Prize with two other winners.

So far in 2022, 20 second-tier Powerball prizes of $1 million or larger have been sold to Texas Lottery players, including nine during the current jackpot run, with four of those occurring over the last four drawings (one on Oct. 29, two on Oct. 31 and one on Nov. 2).

Powerball Grand Prizes currently start at $20 million and roll until the jackpot is won. Players win the Grand Prize by matching five numbers from a field of 69 numbers and one Powerball number from a field of 26 numbers. By choosing Power Play® for $1 more per Play, players can multiply their non-Grand Prize winnings by two, three, four, five or 10 times*. A Power Play Match Five (5+0) prize is set at $2,000,000 regardless of the Power Play number selected. All other non-Grand Prizes will be multiplied by the Power Play number selected. *The 10X Power Play multiplier is available for drawings in which the initially advertised annuitized Grand Prize amount is $150 million or less.

Drawings are broadcast each Monday, Wednesday and Saturday at 10:12 p.m. CT. Texas Lottery players can purchase Powerball tickets at more than 20,000 Texas Lottery retailers across the state. Ticket sales for the next Powerball drawing will close at 9 p.m. CT on Monday, Nov. 7. The retailer that sells a jackpot-winning Powerball ticket is eligible to receive up to a $1 million retailer bonus.