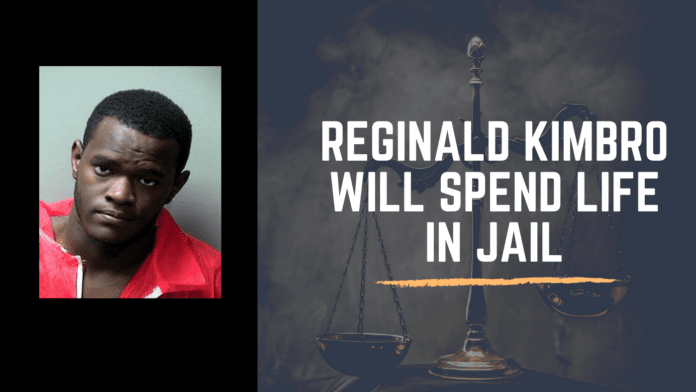 (Fort Worth, TX) – Molly Jane Matheson and Megan Getrum did not die in vain.
Their lives and deaths will have an impact on the way law enforcement approaches victims of sexual assault, according to several individuals who gave victim impact statements in the 213th District Court Tuesday morning.

Both Molly and Megan’s parents told Reginald Kimbro that he no longer has power over them.

“I honestly have nothing to say to you,” said David Matheson, Molly Jane’s father. “You don’t exist. You don’t occupy any space in my head. You never will. You are the definition of a coward.”

Kimbro, 28, pled guilty Friday to the 2017 rapes and murders of Molly Jane Matheson, a 22-year-old Fort Worth woman, and Megan Getrum, a 36-year-old Plano woman.

He also pled guilty to one charge of aggravated sexual assault and three charges of sexual assault stemming from allegations made in several Texas counties. He was sentenced to two life sentences without parole, a life sentence and 60 additional years behind bars. The multi-county disposition was orchestrated in part by Assistant Tarrant County Criminal District Attorneys Allenna Bangs and Page Simpson with the help of prosecutors in Dallas County, Collin County, and Cameron County.

‘These Murders Were Preventable’

Dozens of people gathered in the courtroom, and an overflow courtroom, to hear what the victims and families had to say to Kimbro.

The sentiment of each allocution echoed the next, that victims of sexual violence will be given a voice.

And, if women were believed, these murders were preventable.

“I am beginning to see the start of a revolution, a movement,” said Tracy Matheson, Molly Jane’s mother. “I will spend the rest of my days making sure that this battle is won. The conversation about sexual assault will change and victims will be empowered to find their voices.”

A few survivors themselves spoke directly to Kimbro, who sat in silence. “Today is a celebration because justice has been served,” one woman said. Another labeled him “a true monster.”

Other victims, witnesses, and members of the Plano and Fort Worth Homicide Division were present to show support.

The courtroom was silent as both mothers addressed Kimbro

Diane Getrum, Megan’s mother, held up a picture of her daughter for the court room to see. She told stories of her daughter’s adventures and her missed opportunities and ended by telling Kimbro that her life is too short to spend any more time focusing on him. She said she was leaving thoughts of him behind today.

Tracy Matheson spoke to directly to Kimbro: “Our decision to accept your guilty plea, allowing you to avoid the death penalty, has absolutely nothing to do with mercy. You have done nothing to deserve that. Instead, it has everything to do with silencing your voice.”

“No longer will you be able to sit behind the lie of innocence,” she added.

A non-profit organization led by the Matheson Family has worked to lobby for legislation in Texas. They are working to change the narrative and approach to sexual assault investigations and arrests. A statewide task force was created by Texas Governor Greg Abbott to address gaps in services provided by law enforcement in the realm of sexual assault.

The Tarrant County Criminal District Attorney’s Office serves on that task force. In 2019, after a review of sexual assault cases in Tarrant County led by Sharen Wilson, a
division was formed to specifically focus on adult sexual assaults. Since that time, the team has vastly increased the amount of cases brought by law enforcement, indicted by the Grand Jury, taken to trial, and convictions secured.

The message in the courtroom was clear today: If sexual assault cases are not properly handled, and offenders remain free, violence can and will increase and the wake of destruction will continue.

Tracy Matheson again referenced the impact that victims of Kimbro’s violence, including her daughter, will have on this movement.

“The light – Molly’s brilliant, joy-filled, bright light – will shine over the darkness brought by your cowardly decisions. … Her light is the fuel for the revolution.”