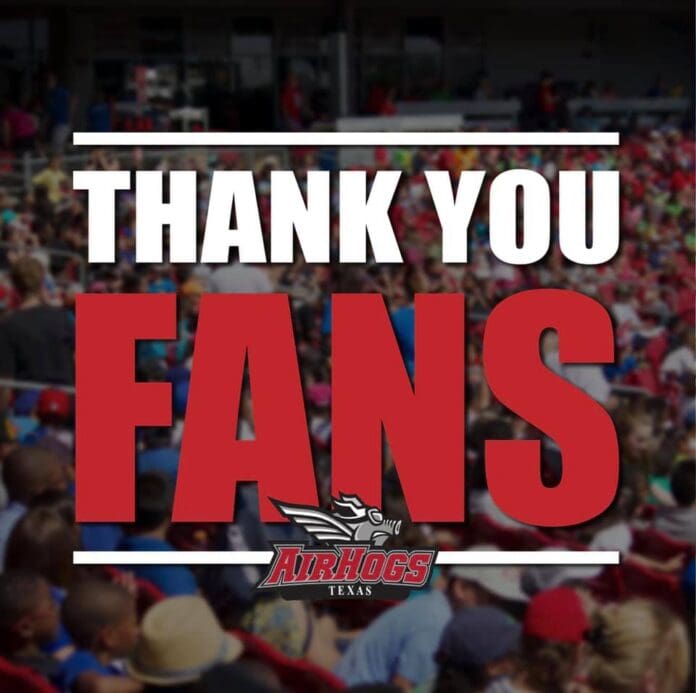 Roughly an hour ago baseball fans in Grand Prairie received bad news, when the Texas AirHogs posted the following to their Facebook page: “We appreciate the love and support the AirHogs fans have shown over the last 12 years. We are proud that this organization brought Grand Prairie an American Association Championship and made memories along the way for players, staff and most importantly the fans. To all that have played a part in the success of the team, thank you.”

We appreciate the love and support the AirHogs fans have shown over the last 12 years. To all that have played a part in the success of the team, thank you. pic.twitter.com/XZggSvmsFc

“We are disappointed in the loss of the Texas AirHogs, but we are determined to continue expansion in the state of Texas,” said American Association Commissioner Joshua Schaub. “We have a great operator in Cleburne with the Railroaders, and we anticipate announcing future expansion in Texas in 2021.”

One of the things fans really enjoyed about attending AirHogs games was the atmosphere. Last November, Kelsey Armand, director of business development for the AirHogs, talked about how personal the games were for fans.

“Every kid has a chance for a foul ball and an autograph from a player,” she said.

Grand Prairie and DFW residents took to social media expressing their hope another team will find play at the stadium. Another fan asked, does that mean AirHogs merchandise will be available in a “fire sale”?