How To Avoid Austin Traffic

Because I travel frequently down to Austin, a roundtrip on I-35 that’s just under 400 miles, my favorite new ploy is to stay north of the city. A stay in Round Rock is the easy way to avoid the horrendous mid-town traffic. After being caught in a few of those traffic jams going through Austin, I finally realized it’s best not to go there.

Those of us who’ve lived in Texas a long time can remember when driving through Austin wasn’t so difficult. Of course, that was before everyone we knew (including half my family and many friends) moved there. Bad traffic times are morning rush hours, lunch time, evening rush hours and dinner time. So I try to pick in-between times to venture into the city.

There are several affordable hotels just off I-35 that make meeting friends or keeping appointments in town easier. The least expensive is the Best Western Executive Inn at 1851 N. I-35 in Round Rock, a short 17 miles north of downtown Austin. Current bookings are listed online for less than $70 a night. Round Rock is Dell’s corporate headquarters, and also has a Premium Outlets Mall, an Ikea, and a number of restaurants.

There’s no need to drive into Austin for dinner, with all the options now available in Round Rock. One of their most popular restaurants is The Scarlet Rabbit at 410 W. Main Street. This Texas bistro invites diners to “take an immersive trip down a culinary rabbit hole.” Interesting items on the dinner menu included an appetizer of Fried Oyster Nachos ($9) and entrée of Texas Bouillabaisse (Gulf shrimp, oysters, mussels, black drum, and spicy broth, $18).

For breakfast, there’s a branch of Austin favorite Kerbey Lane open for business at 2120 N. Mays Street in Round Rock. The restaurant is open 24 hours, and serves such scrumptious dishes as the Kerbey Scramble (scrambled eggs, home fries, mushroom, tomato, green onion, cheddar jack cheese, two sides for $8.95). Signature omelets like Chicken Verde are only $9.95, and mimosas are just $2. Their giant, fluffy biscuits are probably the most popular side, justifiably so. 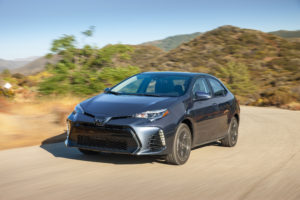 I drove a 2017 Toyota Corolla 50th Anniversary Special Edition compact sedan down to Round Rock, averaging almost 35 mpg. With construction on I-35 improving tremendously over the past year, I enjoyed an unusually economical trip. Where driving south of Waco to Salado used to be something of a nightmare, it has become almost routine now. It’s still sad, though, to see how many businesses—like Salado’s beloved Stagecoach Inn—have been hurt by the seemingly endless construction on I-35.

Toyota’s entry level sedan has been around 50 years for a good reason. It’s roomy enough to seat five, but still small enough to fit into even the tightest parking spots. The test model came in a lovely black cherry pearl coat of paint, a special color for the anniversary edition.