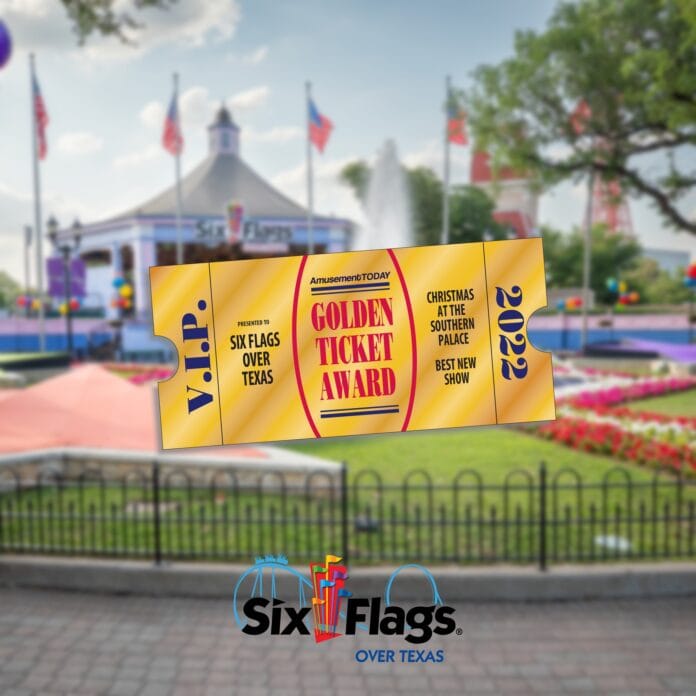 Best New Show for Christmas At The Southern Palace

“With a live band, amazing vocalists and colorful costumes and sets, it was no surprise to see audiences leaping to their feet at the end of performances,” said Tim Baldwin, Golden Ticket Awards Communications Coordinator, Amusement Today. “It was electric.”

“We’re thrilled to accept a 2021 Golden Ticket Award,” said Park President Dennis Clark. “This recognizes the exceptional experience we work so hard to provide our guests every day. We’re carrying this momentum forward with a long list of new and returning events in 2022 and 2023.”

Amusement Today began publication in 1997, and the award-winning magazine is now a leader among the amusement industry. The Golden Ticket Awards were established in 1998 and are the direct result of votes cast from around the globe. More than 500 experienced travelers, divided equally among the nation as well as internationally, received ballots. Industry journalists and ride suppliers also have categories devoted to professional topics. A free downloadable issue containing the charts and full lists of finalists, as well as an online presentation of the awards, can be found at www.GoldenTicketAwards.com.

About Six Flags Over Texas and Hurricane Harbor

Six Flags Over Texas, the company’s flagship park and the Thrill Capital of Texas, is home to more than 100 rides, shows, and attractions, including 14 world-class roller coasters like New Texas Giant and Titan. Six Flags Hurricane Harbor, the largest water park in North Texas, features more than 40 rides and attractions like Typhoon Twister and Tsunami Surge. Six Flags Over Texas and Hurricane Harbor are the premier destinations for thrilling family fun.

Six Flags Entertainment Corporation is the world’s largest regional theme park company and the largest operator of water parks in North America, with 27 parks across the United States, Mexico and Canada. For 61 years, Six Flags has entertained millions of families with world-class coasters, themed rides, thrilling water parks and unique attractions. Six Flags is committed to creating an inclusive environment that fully embraces the diversity of our team members and guests. For more information, visit www.sixflags.com.