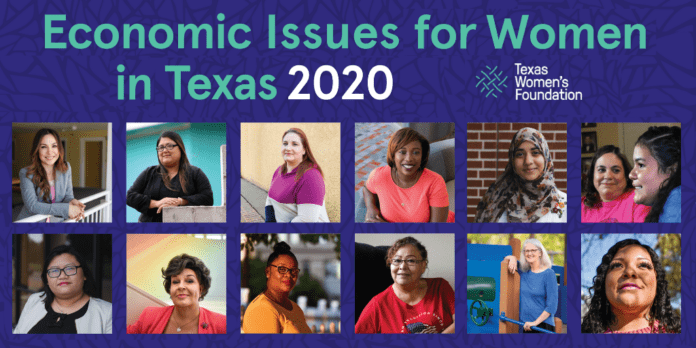 A Closer Look at Economic Issues Affecting women In Texas

Texas Women’s Foundation’s Economic Issues for Women in Texas report shows the state’s women face continuing challenges. These challenges include income, health insurance, college loan debt, and housing stability. They are the four critical building blocks for a woman and her family to achieve economic security.

The report examines the economic status of women in Texas, and identifies opportunities for change and policy recommendations. First released in 2014, the study is updated every three years, and is based on research conducted by Every Texan. Sources include U.S. Census Bureau data, federal and state agency data, policy organizations, and academic research.

“Economic Issues for Women in Texas examines both policies and practices at the state level, while identifying areas where innovation and investment can help strengthen women and their families,” said Roslyn Dawson Thompson, president and CEO of Texas Women’s Foundation. “We encourage our Army of Advocates across Texas to use the study – and its platform of specific recommendations and potential actions – with lawmakers, as well as business and community leaders – to help shape policies and practices that impact women and girls. We hope the research creates a shared understanding and motivates a shared commitment to drive solutions that support women and their families, and a build a stronger Texas for us all.”

The population of Texas includes 14 million women and girls, and has grown 19 percent in the last decade. The majority of Texas women are women of color. A typical Texas woman is: • a Millennial (age 36) • a woman of color • living in a city • earning $35,000/year or less • working to support her family. From 2008 to 2018, the largest population increase was Hispanic women and girls, up 1.3 million, or 31 percent. • The largest percentage increase was Asian women, at 75 percent. For Blacks and African-Americans, the growth was 27 percent. Nearly one in six Texas women and girls lack sufficient financial resources to care for themselves and their families, and 2.3 million women in Texas earn less than the poverty threshold.

Almost 60% of Texas Women Are Breadwinners/Co-breadwinners

While women in Texas experience poverty at higher rates than men, two in 10 Hispanic or Black women experience poverty. Single-mother-led households are almost two times more likely to experience poverty than single-father-led households. Almost 60 percent of Texas women are breadwinners or co-breadwinners for their households. In Texas, the gender wage gap has not budged over the past decade. For every hour that women in Texas work, they earn $2.83 less than their male counterpart, based on median hourly wages. Among full-time workers in Texas, women earn $10,136 less per year than men on average.

Overall, our women are well-educated, with 1.4 times as many women as men completing public college in 2018. Yet Texas women still earn less than men in every single occupation. Women are at the center of the student debt crisis: Women hold nearly two-thirds of the outstanding student debt in the United States—about $929 billion. The state has been slowly reducing public investment in Texas colleges and universities since 2000, prioritizing awarding aid to full-time students attending four year universities.

Dena L. Jackson, COO of Texas Women’s Foundation, said, “While this data is from before COVID-19 changed all of our lives in so many ways, the building blocks are in the headlines every day as stumbling blocks for women, families and our economy seeking to recover.”

Full-time infant care in Texas is almost as expensive as college—more than $8,000 per year in 2019. According to the U.S. DHHS, child care is affordable if it costs no more than 7 percent of a family’s income. By this standard, only 16 percent of Texas families can afford year-round infant care. After-school programs are scarce and costly: When after-school programs are not available, working parents must make difficult choices.

Only 15 percent of school age kids participate in after-school programs, due to lack of availability and cost. Nearly half of working women across Texas lack access to appropriate child care in the community where they live or work. Subsidies and child care deserts are realities: Over a million Texas children could qualify for subsidized child care through the Texas Workforce Commission, but fewer than 10 percent of eligible children receive it due to lack of funds and lack of child care providers who accept subsidies.

Read the full report at txwfecoissues.org. The Foundation is “Transforming Texas for Women and Girls.” Since 1985, the Foundation has been advancing social and economic change for women and girls in Texas. The Foundation raises funds from a broad base of donors, including individuals, foundations and corporations.