A Trip To Sonoma County

My husband and I spent four days in Sonoma County in September, touring wineries and enjoying the scenery in this beautiful area of northern California. We stayed in a pool house at Robert Young Estate Winery, a thriving family-owned business operated by the late Robert Young’s children (Jim, Fred, Jo Ann and Susan), and their families. In 1858 their great-grandfather Peter Young bought 120 acres of Alexander Valley farmland. Robert Young Estate Winery now has 449 acres with 317 acres of vineyards, plus livestock and crops on the ranch. They even have a resident Alpaca.

Renowned for their award-winning grapes, as well as their hospitality, the Young family opened Scion House last year. The state-of-the-art hospitality center and tasting room (named for their famous Scion Cabernet Sauvignon) has indoor and outdoor seating, and commands a 360 degree view of their vineyard and nearby woods. So our first concern when we heard about the fires ravishing Sonoma County was for the Robert Young Estate Winery and the great people we met there.

After I contacted GM Karen Maley with a few questions, she graciously agreed to send this update and some photos for our readers. Here is a report from Young family members.

Q: Did you fear for the estate/vines/or even your lives at any point during the Kincaid fire?

“Yes, as my dad would have said, ‘It was a very close shave.’ Robert Young Estate Winery was one of the first to be hit by the Kincaid fire line that originated (as far as we know now) with a downed power line. It was at the Geysers Thermo Generator plant in the hills NE of our ranch late Wednesday night Oct. 23. In the end, we were very fortunate – the family, team and Winery are all safe. Several of our neighbors lost their homes and two wineries within a mile south of us were lost (Soda Rock and Fieldstone).”

“This is not the first time we have experienced a fire threat. In the fall of 2017, fires threatened our area, but while we experienced poor air quality, the fires never came closer than one or two miles from us.”

“Late Wed. evening Oct. 23, as we saw the fire approaching the winery, many of us feared the worst, that the entire ranch would be lost. Fred, Jim and Robbie Young refused the subsequent evacuation warning, choosing to stay and fight. For the rest of the team, we were very worried for them, and knew that they would leave only when they realized that nothing else could be done. Earlier that day, Pacific Gas & Light (PG&L) issued a Red Flag Warning due to high winds anticipated for that night. They shut off power to our area in Alexander Valley.”

“We first saw a glow in the ridge, near the Geysers plant about 10 p.m. At that point, we were concerned, but not too worried since we had experienced this in the 2017 fires. Those fires never got closer than a mile from the ranch. At 2 a.m. the family awoke again to see that the fire had moved closer. Approximately one mile away, it was concerning but not an imminent threat. About 4:30 a.m., Robbie Young heard and felt the high winds (70+ MPH, very unusual) against the house on the ranch. He went out to see embers in the front yard. He saw the fire wall at the perimeter of the ranch. Within ten minutes, the brush fires had started.”

“Luckily, an entire strike force of firemen and first responders was already staged at the ranch. We have a large fire hydrant, a water truck on site, and numerous irrigation ponds that the fire department can pull from for our end of the valley. The fire stopped at the vineyards (vineyards provide a very effective fire break), but the winds carried the embers. This resulted in a brush fire that whipped through the ranch (449 acres, 317 planted to vines, and the rest for structures and brush). We worked side by side with the fire department that night to supply them with water. They held the fire wall back from the Robert Young Tasting Room, Winery and historical home.”

“Fire departments pulled from several areas – Geyserville station, Healdsburg, Santa Rosa Amador County, Marin and beyond. They were staged at RYEW and fought through the night and into Thursday to hold the fire wall and put out spot fires all along the ranch. A photo shows when the fire team finally got the fire contained in the area. They took a much-needed break.”

“Beginning Thursday, the family, vineyard workers and other key team members who could gain access to the property began the process of cleaning up. Removing debris, including burned and damaged trees and tree limbs from the property, repairing perimeter fences that were lost, etc.”

“Almost all of our grapes had been picked before the fire and were in tanks/bins going through fermentation. The wine-making team also made the gauntlet through numerous police and National Guard barriers to access the winery and continue processing the fruit. We have employed numerous tactics to access the property, including caravanning on back routes through neighboring vineyards.”

“From Oct 23 to Nov 1, the ranch has been without power and has been running on a generator. Saturday morning October 26, a mandatory evacuation was sent for the surrounding towns of Geyserville, Healdsburg and Windsor. This is where most of the Robert Young Estate Winery non-family team live. October 30, mandatory evacuations for the surrounding towns were lifted. While they have power, they do not have gas for cooking or hot water. The evacuation order is still in effect for the area of Alexander Valley where the winery is located – not due to fire concerns but so PG&E can check the power lines. Power is still off.”

“As of last Friday, we are slowly beginning to return to normal. Most of the fire’s debris has been cleared from the ranch. Wine-making is continuing apace, and we are pressing the wines into barrels and into the caves for aging. Our team is beginning to return to their homes and able to respond to requests from our members and visitors. We are ready to reopen the Hospitality Center and are just waiting for PG&E to finish their line checks in the area and reopen the roads to visitors. We hope to be officially open November 6.”

“This was a very serious situation, and one that impacted our neighbors heavily. We feel very fortunate to have survived the fires intact. We’ve received hundreds of emails and calls from our members across the U.S. They offer their support, prayers and best wishes. It has meant a tremendous amount to all of us. All will be well, and we are forever thankful to our local firefighting and first responder teams.” 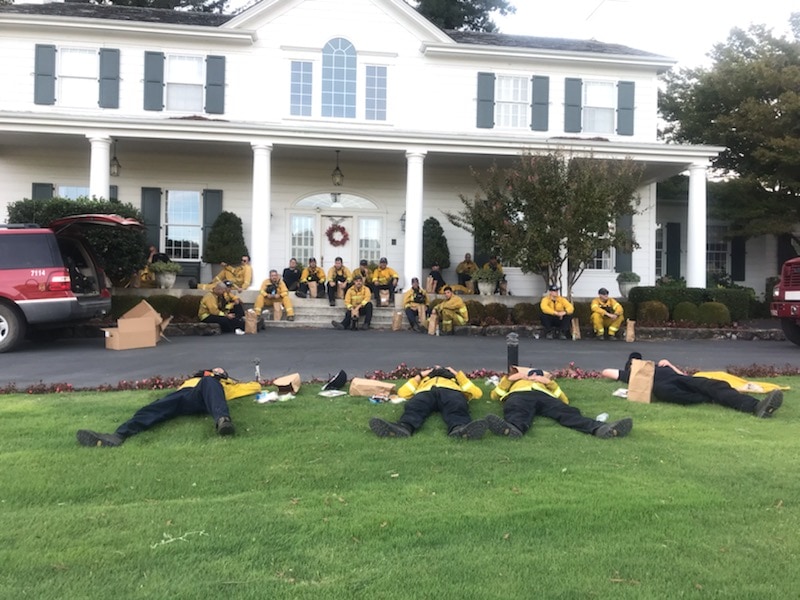