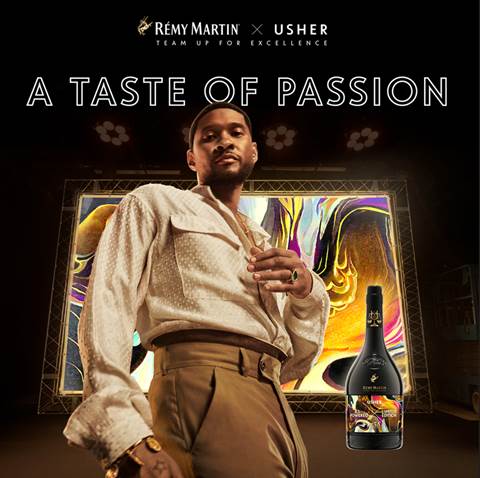 “For nearly 300 years, excellence has been at the core of Rémy Martin, and through this partnership we’ve reached an incredible milestone, where we see brilliance breakthrough at the intersection of art, fine cognac, and technology,” said Amaury Vinclet, Global Executive Director of Rémy Martin. “As a brand that has been a long-time collaborator with Usher and shares the same values, we are proud to have him launch the first limited-edition bottle design for Rémy Martin 1738 Accord Royal. This bottle is a first for the spirits industry in how the technology was used and gives spirits aficionados and Usher fans alike a rare collectible they’ll treasure forever.”

“Usher x 1738 A.I. Powered” Limited-Edition Bottle and NFT
When creating the “Usher x 1738 A.I. Powered” limited-edition, Usher used his own musical vocabulary to describe his olfactory experience with the renowned Rémy Martin 1738 Accord Royal, a smooth Cognac characterized by notes of toasted bread, vanilla and brioche. Fed through A.I. technology, known as Generative Adversarial Neural Networks and Contrastive Language-Image Pre-Training, the avant-garde depiction of tasting notes transformed Usher’s words into artwork that makes the invisible, visible. Reimagined in black and featuring a special seal that celebrates Usher’s 25th anniversary of My Way, the emblematic 1738 Accord Royal bottle brings Usher’s “Taste of Passion” to life with a design that now aptly embodies the harmony of music, technology and art.

“I’m an artist at my core, so transforming an abstract sensory experience like taste into something visual really spoke to my creative process,” says Usher. “I leaned into the exemplary Rémy Martin 1738 Accord Royal that flowed through me and am so impressed by the visuals that came out of the A.I. process – they truly represent the medley of tasting notes captured in the flavor. It’s rewarding to see those words translate to real-world artwork that my fans can engage with while bringing taste front-and-center.”

A total of 50 limited-edition bottles were created as part of this latest collaboration. 25 Usher x 1738: A.I. Powered limited-edition bottles will be available to purchase exclusively on BlockBar.com, the world’s first direct-to-consumer NFT marketplace for luxury wines and spirits. The drop goes live at 10AM EST on Friday, July 29 on a first come, first served basis. Priced at $500*, each NFT is available to purchase with ETH or credit card. At 10AM, the first users to reserve the bottle will then have 10 minutes to checkout. Users who successfully check out will receive an NFT proving ownership of the physical bottle, which is stored with BlockBar until the bottle owner is ready to redeem. The remaining 25 bottles will be gifted to Usher and his team to celebrate the 25th anniversary of My Way.

Each NFT is uniquely marked, and each purchase comes with the option of keeping the NFT, reselling it on BlockBar.com’s marketplace, gifting it, or redeeming it for the physical bottle beginning in October 2022.

“We’re very excited to be part of such a big moment for Rémy Martin as they enter the world of NFTs and launch a new limited-edition bottle which will be our first ever music collaboration to drop on BlockBar.com,” says Dov Falic, Co-Founder and CEO of BlockBar. “As a globally recognized brand known for craftsmanship and excellence, we are honored to have the opportunity to offer a rare collectable item that has been created by one of the world’s most celebrated artists, Usher.”
A Taste of Passion Experience

The Usher x Rémy Martin 1738: A Taste of Passion partnership will go beyond the bottle to showcase a world of opportunity and excitement at the intersection of music, technology, art and cognac, which will vividly come to life through the launch of “A Taste of Passion Experience” in Las Vegas. By harnessing A.I. technology to visually articulate the taste of the Usher x 1738 Accord Royal A.I. Powered offering, “A Taste of Passion Experience,” will usher in spirits and music lovers alike, where the brand will host a multi-sensory experience while nodding to Usher’s illustrious career. To build on the splendor of the evening, attendees will savor an array of Rémy Martin 1738 Accord Royal cocktails specially curated by Rémy Martin and Usher, including The Rémy Roller, brimming with an effervescent blend of Rémy Martin 1738 Accord Royal, aromatic notes of ginger ale and angostura bitters, and finished with a lemon wedge garnish.

Teaming Up for Excellence
The longstanding partnership between Rémy Martin and Usher, who both share a quest for excellence and innovation, first began over a decade ago when Rémy Martin became an official partner of the OMG World Tour. This latest collaboration not only celebrates excellence in music, technology, and art, but also the 25th anniversary of My Way, Usher’s breakthrough album that catapulted him into stardom. The celebration of excellence goes back centuries for Rémy Martin and Rémy Martin 1738 Accord Royal, which is a unique blend of eaux-de-vie that commemorates the reward of excellence bestowed on Rémy Martin by King Louis XV of France in 1738. Rémy Martin Cellar Master Baptiste Loiseau has inherited the savoir–faire of the House from previous generations of cellar masters, and through this transmission of knowledge, Rémy Martin 1738 Accord Royal continues to encompass the spirit of celebrating depth of character and the excitement of indulging in moments of collective success.

On July 29, the Usher x 1738: A.I. Powered limited-edition bottle will be sold exclusively on BlockBar.com. The immersive ‘A Taste of Passion Experience’ is running on select nights from July 15 through October 29, in tandem with Usher’s My Way Las Vegas Residency, with tickets available for purchase HERE.

Since 1724, the House of Rémy Martin has produced premium spirits that consistently appeal to the world’s most discerning connoisseurs. A profound love of the land, a continuity of family ownership and a passionate commitment to  excellence  has  sustained  Rémy  Martin  for  nearly three  centuries.  As a result of  its masterful  production  and  generations  of  tradition  in  Cognac, the House of Rémy Martin today produces Cognacs Fine Champagne, including Rémy Martin® XO, Rémy Martin® Tercet®,  Rémy  Martin®  1738  Accord  Royal  and  Rémy  Martin® V.S.O.P. For additional information, visit www.RemyMartin.com

ABOUT RÉMY MARTIN 1738 ACCORD ROYAL

Born from the cask and named after a royal approval, Rémy Martin 1738 Accord Royal is a truly distinctive cognac. Its exceptional smoothness and rounded oakiness starts with the toasting of the casks, before the eaux–de–vie even begin to mature. This unique aromatic profile is then revealed through a rigorous selection of eaux–de–vie. Recognized for its outstanding quality year after year in international competitions, Rémy Martin 1738 Accord Royal celebrates true depth of character and the sheer indulgence of sharing good moments.

Usher has changed music, culture, and countless lives. Beyond selling over 80 million records worldwide and collecting dozens of awards, he has simultaneously lit up the small screen on NBC’s The Voice and the big screen in blockbusters such as Hustlers. He has also tirelessly distinguished himself as a devout humanitarian, raising tens of millions of dollars for various causes and uplifting youth via his New Look Foundation since 1999. A true outlier, he was equally at home on the stage of his blockbuster 2021 Las Vegas residency as he was on a 2016 government cultural mission to Cuba as part of President Barack Obama’s Presidential Committee for Arts and Humanities. The multiple GRAMMY® Award-winning diamond-selling international megastar, actor, dancer, entrepreneur, philanthropist, and proud Atlanta resident inspires change yet again in 2022 and beyond.

Thus far, he has gathered eight GRAMMY® Awards and emerged as Billboard’s “#1 Hot 100 Artist of the 2000s,” “#2 most successful artist of the 2000s,” and “one of the best-selling artists in American music history,” according to the RIAA. He catapulted four consecutive albums to #1 on the Billboard Top 200, beginning with the landmark diamond-certified Confessions in 2004. He continued to push boundaries with a series of singles and shows including Usher – My Way the Las Vegas Residency before setting the stage for his ninth full-length offering in 2022.

Most importantly, Usher gives back at every turn. Under his leadership, the New Look Foundation provides opportunities for young people in underserved communities, enabling them to flourish and achieve seemingly impossible dreams. He has contributed to numerous philanthropic causes and historic advancements. He penned a moving essay in The Washington Post, lobbying for the recognition of JUNETEENTH as a holiday in 2020. Fostering the national and eventual congressional conversation, he attended the signing of the bill making JUNEETEENTH a federal holiday at its passage during 2021. He has achieved recognition and various honors from the Boys & Girls Club of America, the Trumpet Foundations, and Do Something. The NAACP selected him as its 2010 Ford Freedom Award Scholar, and Morehouse College honored him with the prestigious 2014 “Candle Award.” In 2022, he also took the stage at The Beloved Benefit, which exists to fortify and transform communities throughout Atlanta.

Founded in October 2021, BlockBar is the world’s first NFT DTC marketplace that connects consumers and collectors with the owners of luxury wine and spirits brands by providing the opportunity to exchange NFTs for unique products. Having been in the spirits industry for many years, co-founders Dov and Sam Falic noticed the issues consumers and brands were facing in the world of wine and spirits, so launched BlockBar to provide transparency, authenticity, quality assurance and storage. BlockBar’s proprietary platform allows consumers to purchase asset backed NFTs directly from the brand owners themselves. BlockBar’s proprietary smart contracts verify authenticity, and its partnership with top cyber- and crypto-security firms ensures that transactions are fully protected and transparent. Consumers are able to transact directly with the brands and no longer have to worry about authenticity or storage. The physical bottles are stored in a secure facility in Singapore with 24/7 security, motion sensors, and temperature control. Buyers can pay for products via credit card or Ethereum and have the option to either burn the NFT to redeem the physical product or resell the product through the BlockBar.com marketplace.