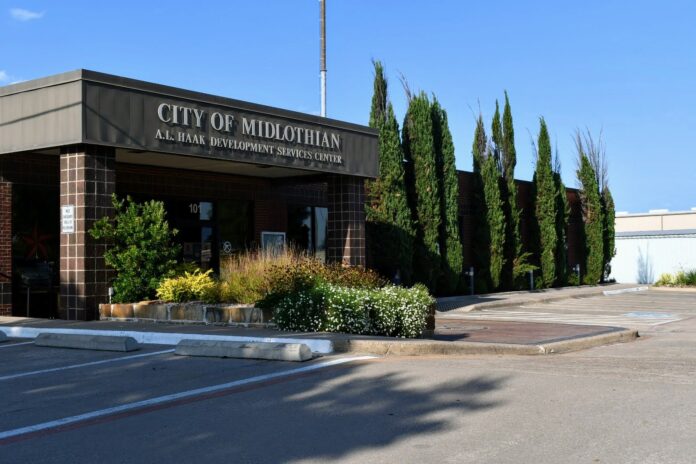 Editor’s Note: We received information the officers were only given a verbal reprimand, however after publication Chief Smith clarified this and we added the information.

Chief Smith has notified us both Officers received written counseling for removing their body cameras. Per Chief Smith Officer VanderKar was instructed during Field Training that removing the cameral was allowable under certain conditions. This has been corrected. A revised policy will be issued in July. Both patrol commanders have interviewed/discuss this situation with their staff to ensure it isn’t being done and we are currently researching to determine if other arrests have been released without documentation.

The 21-year-old driver was in a red Jeep, and as it turned out, was the daughter of a Midlothian Police Commander.

She was immediately stopped when Midlothian Officer Philip Evitt turned on his lights at FM 663 near the cross street of Allen.

Up to that point everything had been done as most police officers are trained to do.

However, that is when things got a little confusing.

Evitt requested the driver of the car get out, after telling her she seemed to be driving all over the road.

A field sobriety test was conducted and caught on both the dash and body cameras – she did not pass the sobriety test and acknowledged she had drunk a couple of shots of whiskey that night.

During the course of the investigation, Midlothian Officer Nicklaus Vanderkar had also arrived on the scene for backup.

Evitt arrested the 21-year-old for driving while intoxicated.

She was put in handcuffs and into the backseat of Evitt’s patrol vehicle.

While this was going on the assisting officer had dispatch do a background check on the impaired driver.

It was then that Vanderkar realized the woman in the handcuffs in the backseat of Evitt’s car was the daughter of Midlothian Police Commander Clay Regan.

A little later the impaired daughter of the Police Commander was taken out of the backseat of the police car and out of the handcuffs.

In other words, she was let go – her father came to get her according to an anonymous source.

When longtime Midlothian Criminal Investigations Department Sergeant Cody McKinney got wind of the incident, he knew this was not a situation that could be ignored.

First of all, the two officers Evitt and VanDerkar, took off their cameras during the investigation, Evitt apparently doing so at the request of his backup officer.

The cameras were then left in the seat of one of the patrol cars.

And not only that, the footage from the incident was marked as non-evidentiary, which meant if no one caught it within 30 to 60 days it would be purged – in other words – it would disappear.

That didn’t sit well with McKinney either, so he immediately got in touch with Internal Affairs for an investigation. He knew from his years in police work that marking the footage non-evidentiary was a conscious choice, since an officer has to make a note of the type of footage on the camera; traffic stop, evidence or non-evidentiary.

Evitt and VanDerkar’s Sergeant, Stephanie Hanson, was then called to the scene to get involved. She asked the officers the condition of the Commander’s daughter and decided she would call Commander Regan to come get her – even though she saw the 21-year-old had already been handcuffed and put in the back of the patrol car.

One report stated Evitt was told to “un-arrest” the woman.

A thorough Internal Affairs Investigation was soon underway when McKinney told Midlothian Commander Vernell Dooley, with Internal Affairs, about the incident. Dooley then conducted interviews on camera with all those involved in the late night incident.

As a matter of fact, that IA investigation information and the body and patrol car camera footage turned out to be all there was to go by, since there was never a police report written on the incident from the evening.

According to one officer, Midlothian Police Department policy is that a report is to be written whenever anyone is “temporarily restrained.”

When Dooley asked Hanson about the incident and her unarresting the woman, the Sergeant said she, under policy, was able to do what she did by her discretion She said under state law she also was allowed to use her discretion in such a situation.

The officers that evening received only verbal council, not a written reprimand, in their files as some reports indicated.

The sergeant was required to take a paid day off and attend ethics training.

If discretion was used and no one did anything wrong, where is the information from dispatch from the call that night? Calls that are reported normally end up on a call log but it seems to be missing.

Midlothian Police Chief Says The Incident Will Be Used For Training

Midlothian Police Chief Carl Smith said this would have been an excellent situation for officer training, which is what the department might have been hoping – if not for McKinney realizing that this one just didn’t sit right.

Smith, who was open with this reporter in discussing the situation, confirmed Sergeant Hanson did tell the arresting officers Evitt and VanderKar to un-handcuff Commander Regan’s daughter and allow her to leave with her father when he arrived.

“Commander Regan did not know at the time of his arrival that his daughter had failed any field sobriety tests and took his daughter home,” Smith said.

It is unclear why Regan thought he needed to pick his daughter up if she was able to drive, but he picked up his daughter and took her home.

“Officers later spoke with Sgt. Hanson, who indicated she would accept any and all responsibility for the decision,” Smith added. “As with most organizations, there are very few controversial decisions that remain off the grid very long. The situation was brought to Commander Dooley’s attention on March 30, 2021 by Sgt. Cody McKinney. Sgt. McKinney had done significant investigative work prior to notifying staff verifying that the incident did indeed occur.”

Smith said Commander Dooley contacted him and they both agreed that an Administrative Investigation to verify all facts surrounding the incident was necessary. Dooley interviewed the officers involved and recorded their statement forwarding his findings to both Chief Smith and Assistant Chief Scott Brown.

“I issued complaints as required by State Law and Commander Dooley re-interviewed the officers with several clarifying questions,” Smith went on to explain. “After review of Commander Dooley’s findings, I and Assistant Chief Brown scheduled pre-discipline hearings and spoke with each of the officers.”

“The body worn camera policy does not speak to removing the cameras, it does indicate that the cameras will not be turned off until officers are no longer involved in the investigative effort,” Smith added. “There is no law violation at this point; however, the policy is clear. Officers determined the identity of the driver and felt that they needed to alert their supervisor. Both officers are excellent workers and have received multiple compliments since their arrival. They work diligently to serve the community, but still have much to learn.”

Smith went on to say Sergeant Hanson has been an excellent supervisor. He said she has even received Officer of the Quarter and Supervisor of the Year in the past.

Nor has she shied away from the decision she made that night, Smith said.

In regard to using this incident as a training method, Smith added “As stated, my discipline decisions have always been designed to redirect and educate. Life threatening mistakes and intentional violations of policy of law always carry stiff discipline. In this situation, the Sergeant has just about two years of experience and both officers have been on the street on their own less than one year. Educating them to set the stage for a long and productive career is far better than adding discipline for just a punitive measure. They already knew that this decision did not feel right, it wasn’t what we talked about over the course of their career.

Sergeant Hanson, I believe has learned a painful lesson. The use of police discretion has to be within the guidance provided by the vision, mission, core values, policy and state law. This was clearly a decision that violated our collective conscience.”

A mistake within the department, yes, and one that does seem to come with repercussions, but Smith acknowledged all the officers have “sincerely expressed remorse.”

A Closer Look At DWI Cases

However, Focus Daily News has also learned that since that night at least one impaired driver who was arrested for the same thing that Commander’s Regan’s daughter was arrested for did go to jail for drinking and driving.

The case is currently in Ellis County Judge Cindy Ermatinger’s court and the attorney for the defendant in this case has asked the judge to hold the case until it can be determined who the arresting officers were in her client’s case since, after all – if you let one driver go who failed a sobriety test who can say where the line is drawn in letting a second driver go as well.

“We have recently received several Freedom of Information Act requests on this investigation from local defense attorneys,” Smith concluded. “We have also been in contact with our District Attorney’s Office. Our Department will work with the District Attorney’s Office as well as with any Defense Attorney’s office to continue to keep our officer’s credibility intact and to establish a respectful working relationship with all disciplines within the Criminal Justice System.”