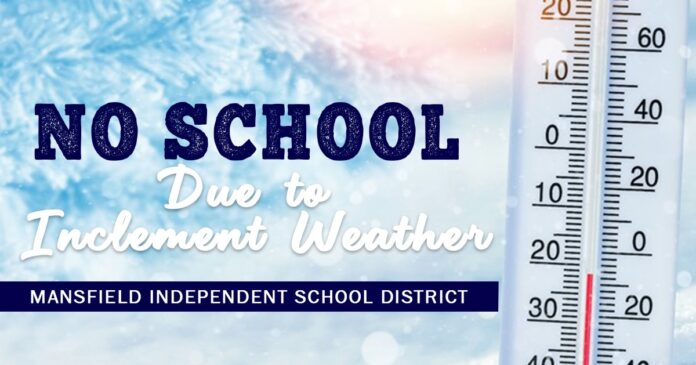 Power outages in the area and dangerous road conditions have led to school closures across the area. Mansfield ISD has made the decision to cancel school for the remainder of the week. Police Chief Tracy Aaron says one of the most hazardous areas for motorists is the East Broad Street/360 Tollway/Holland Road intersections. He advises people to stay off the roads if possible.

Due to the inclement weather conditions, Mansfield ISD will remain closed through Friday, Feb. 19. There will be no in-person or virtual classes for the rest of the week, and all after-school activities & practices will be canceled. Stay safe & warm!

Mansfield police and fire continue to provide assistance to residents during this emergency. Mansfield Fire crews responded to more than 100 calls from Monday morning to Tuesday morning, many of them medical calls and fire alarms. Mansfield Police officers have responded to more than 400 calls in the last two days. Most have been vehicle accidents, motorist assists and welfare checks. Public Safety officials are also asking residents to try and limit 911 calls to medical emergencies and accidents.

Power issues have also impacted water utilities as they address issues of frozen meters and water lines. They are also working diligently to maintain power at the lift stations to protect the city’s overall water system. Crews have responded to 64 total calls with most of those being frozen and busted water pipes.

Republic Services canceled collection for Monday and Tuesday. Officials will evaluate weather conditions before determining their schedule for the remainder of the week. Watch the City website and social media for updates.

If you are in Mansfield and without power, the following locations have been opened as warming centers.

The City has two warming centers for residents without power: the Chris W. Burkett Service Center, 620 S. Wisteria St., and the Mansfield Activities Center, 106 S. Wisteria St. These centers serve as a temporary warming area for residents to get out of the cold and charge their cell phones. The MAC has seen 26 people and 29 people have been through the Service Center. For information, call 817-728-3609.

Transportation to the centers is not provided. Please exercise caution if traveling to the centers. We’re sorry but because of limited space and appropriate resources, pets are not allowed. Residents are encouraged to bring their own food and blankets.