Four Best Southwest high schools, two from Mansfield and one each from Grand Prairie and Waxahachie, are nominated for numerous awards in the prestigious Dallas Summer Musicals High School Musical Theatre Awards. The winners will be announced at the gala event, held at the Music Hall at Fair Park May 17. Now in its seventh year, the DSM HSMTA program, under the direction of Duncanville resident Tracy Jordan, has grown exponentially since its 2011-2012 start. Only 30 schools from North Texas entered the first DSM High School Musical Theatre Awards competition.

DSM President Kenneth T. Novice said, “DSM is always thrilled to celebrate these young performers and to encourage them to develop their talents and artistic passion. These students are not only the stars of tomorrow, they are future leaders who will continue to bring creativity to everything they do. Congratulations to all nominees!”

One of the first schools to participate in DSM High School Musical Theatre Awards seven years ago, Waxahachie High School, is a perennial nominee and frequent winner. Their musical, “The Mystery of Edwin Drood,” was nominated for 11 awards this year.

WHS Theater Arts Director Andy Reynolds praised DSM HSMTA and Tracy Jordan, saying, “Knowing Tracy these past seven years has been an honor. To see how many student’s lives he has touched has been very inspiring to me. Over the past several years Tracy has given High School Musical Theatre departments across our region a platform that very few areas have. The amount of time and effort that it takes to put something together such as the DSM High School Musical Theatre Awards can make anyone’s head spin! Yet he does it because of his love of the art of theatre, music, and dance but more importantly than that…he does it for the love of the students. He constantly encourages teachers to aim for greatness. To set the bar high and encourage their students to exceed that bar.”

“Being a part of the DSM awards for the past seven years has given Waxahachie HS a platform to show off the extraordinary talent that our little town has that otherwise would go unnoticed expect in our little town,” Reynolds added. “I have had many students whose talents were recognized because of this event and were awarded and admission and scholarships to university Musical Theatre departments. Tracy is a true educator in every sense of the word! My district, my students, and I are blessed to know him.”

Judges for the awards reviewed 79 performances from 75 North Texas and Oklahoma schools from the past year. Based on Broadway’s Tony Awards®, DSM HSMTA celebrate the arts and their ability to improve all areas of education. The second largest program of its kind in the U.S., it recognizes artistic and educational achievements of students and their high school programs. Each production evaluation is by a three-judge panel of industry professionals and veteran educators.

Judge Steve Noviello, Fox 4 TV’s Consumer Reporter, said, “Tracy Jordan sets the bar when it comes to commitment. His hard work and dedication are unmatched in any other organization I have been a part of. He is an inspiration to the students and teachers and his genuine enthusiasm with which he approaches DSM HSMTA is infectious. Look no farther than the rate at which this program has exploded into one of the biggest in the country as a testament to Tracy’s true love for it.”

Awards are presented in 17 categories with scholarships awarded to outstanding graduating seniors nominated by their teachers and selected by the DSM scholarship committee. The Best Actor and Actress winners receive an all-expense paid trip to New York City where they represent DSM HSMTA in the National High School Musical Theatre Awards (The Jimmy Awards) at the Minskoff Theater on Broadway. Waxahachie HS leading actress winner Kaiden Maines received a $2,500 scholarship at the 2016 Jimmy Awards. The 2017 leading actress winner, Shelby Priddy, hailed from Mansfield HS.

Longtime program coordinator Tracy Jordan said his work with DSM HSMTA students and their instructors “has been a wonderful opportunity to complete the circle for me. My Kimball High School choral director Richard Bryan was a tremendous influence on my life 40 years ago. Then (longtime DSM director) Tom Hughes gave me my professional start here with the Dallas Summer Musicals. After having enjoyed a career in performance, it’s been a rare honor and privilege to come back to where I started my professional career. I am so fortunate to be able to help these kids who aspire to work in the industry start their careers. Not a day goes by that I don’t walk by the statue of Tom Hughes in the Music Hall lobby and say thank you, Tom, I hope I’m doing right by you.”

Through funds raised by private donations and ticket sales, DSM HSMTA will award 17 scholarships ($55,000 total) to continue to foster the great talent North Texas has to offer. To date, DSM HSMTA College Scholarship program has awarded $190,000 in cash scholarships to deserving students.

Another well-known industry judge for DSM HSMTA, John Garcia, (Executive Director, Producer, Founder THE COLUMN Awards Organization; and Senior Chief Theater Critic/Editor) said, “When Tracy Jordan first asked me if I was interested in being on the DSMHSMTA judging panel, I had no clue what it was, but it sounded like fun. Now seven years later I proudly still serve on as a judge, and for the last four years have assisted backstage on awards night as a school host or assistant. All volunteered. Why? Tracy Jordan. We both run Awards programs, so I constantly study him, and I have bounced ideas with him. I have called him to discuss at times serious issues that arise. He can offer solid, neutral advice. He will listen to you. He has a pool of judges and teachers with a myriad of backgrounds, and I study him on how he handles them all. I want to be that kind of leader. He is compassionate, professional, loving, and never loses his temper. And his immense passion is my passion, which is the love for the art of musical theater. And let’s face it, the man knows how to wear a cool suit! LOL.”

This year’s awards ceremony will be held May 17 at the Music Hall at Fair Park. The event kicks off with a red carpet welcome to all the nominees at 5:30 p.m., followed by the ceremony at 7 p.m. WFAA Channel 8 Daybreak News Anchor Ron Corning will emcee the show. All nominees, participating high schools and their shows are listed at DSMHSMTA.org.

Single tickets for the DSM High School Musical Theatre Awards range from $20 to $99 and are on sale at DallasSummerMusicals.org or by phone at 1 (800) 745-3000. They can also be purchased in person at the Music Hall at Fair Park Box Office Monday through Friday from 10 a.m. to 6 p.m. and Saturday from 10 a.m. to 4 p.m.

Theatre Director Jennifer Bishop, Grand Prairie Fine Arts Academy, was a new participant in this year’s awards program. Their production of “Heathers” was nominated for several awards this year.

Bishop said, “The beauty of Grand Prairie Fine Arts Academy is the focus on both fine arts and advanced academics. As an all AP/Pre-AP campus, our students are constantly working at a college level. Our unique schedule allows students to spend twice as much time in their fine art as they would at a traditional campus which allows them to really hone in on their skills and specialize in what they truly love. GPFAA is a safe place for young artists to really dive in to their art. We teach them to work hard, never give up, failure is okay, and accept success with grace. Above all, we hope to send really passionate and driven humans off into the world.”

With the growing popularity and expansion of awards programs like DSM HSMTA, fine arts programs in area schools promise to continue to grow and thrive in our community. 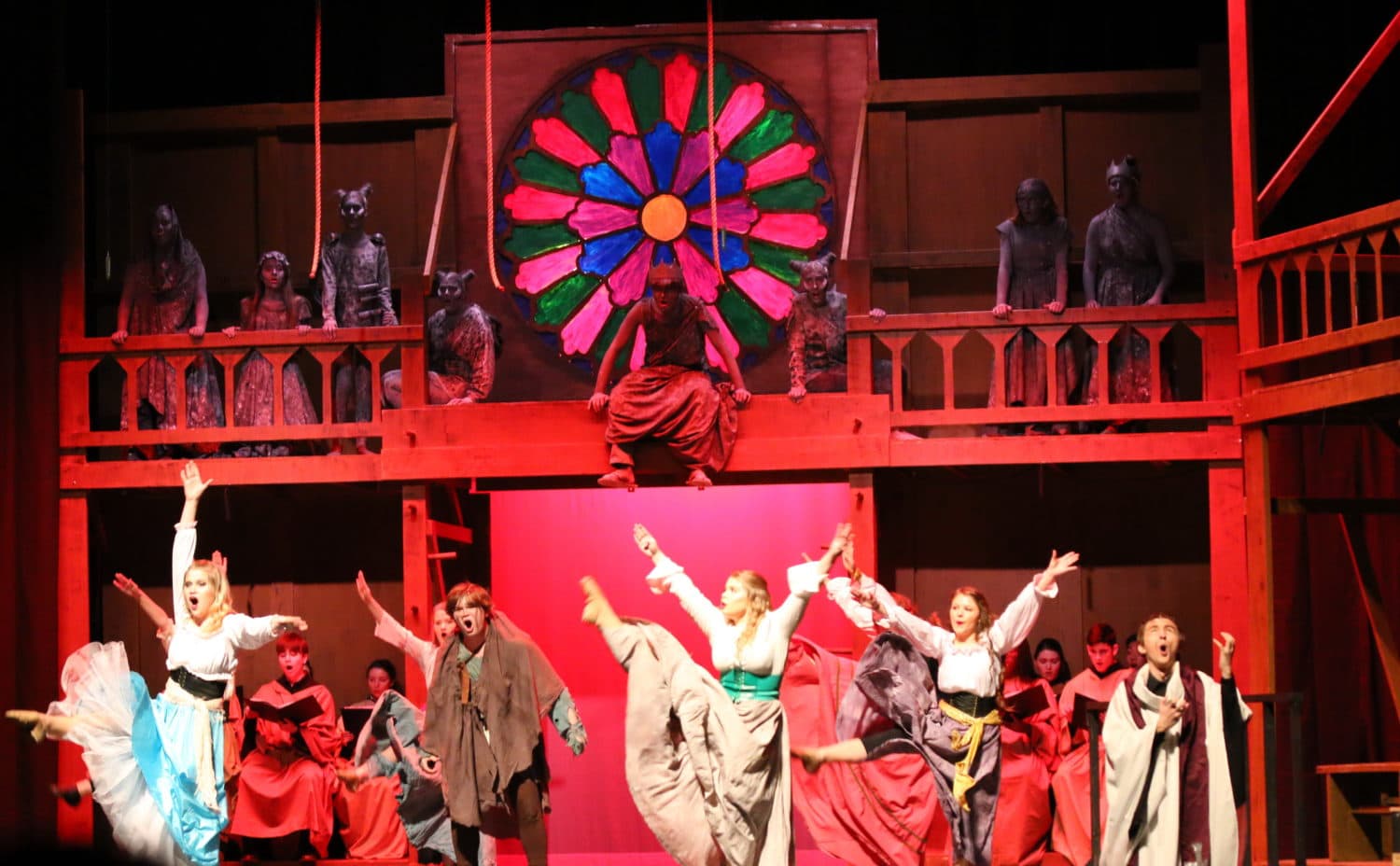