MANSFIELD – It was in July 2020 that the Mansfield City Council adopted a program called Downtown Development Strategies. The program consisted of a compilation of 32 strategies organized by the consultant on the project Halff & Associates.

Nicolette Allen, Mansfield Strategic Initiatives Officer and Downtown Coordinator explained these strategies were developed over a yearlong research and analysis project. The thirty two strategies were centered around the goal of revitalizing Historic Downtown Mansfield.

“Out of this study came downtown’s vision statement: ‘Historic Downtown Mansfield is a vibrant destination and livable center that supports a range of businesses, housing options, and activities for all ages.’ The strategies were categorized into four goal categories,” Allen said.

These four goals include:

After the adoption of the Downtown Development Strategies the City Council appointed Allen as the Historic Downtown Coordinator and she said over the time that has passed since she took on the role a number of initiatives have been put into place to begin the revitalization of Historic Downtown.

One of the biggest initiatives so far has been to build relationships with the downtown organizations that already exist, such as the Historic Mansfield Business Association (HMBA), Downtown Mansfield, Inc. (DMI), and The LOT Downtown Board, as well as the Mansfield Commission for the Arts. The city has also continued to try to bring as many special events downtown as it can – such as moving the Veterans Day Parade downtown for the first time this year and collaborating with the Veterans Memorial Foundation to bring the Remembering Our Fallen Traveling Memorial to the LOT Downtown.

One of the biggest puzzle pieces that needed to fit in laying the foundation for redevelopment in Historic Downtown was the City’s rezoning of the entire district.

“This new zoning was adopted and through a form-based code, reduces the barrier to entry and helps pave a path of least resistance to bring new/re-development to the area that fits the form and nature of the district, continue to help with placemaking and creating identity, but includes a less restrictive permitted-use table – allowing for more business types and higher-density housing to be built. This is a huge accomplishment with big impacts for the area and was received well by the public. In fact, through the town hall meetings there were residents who asked about expanding the district boundaries.”

Some of the renovations that have already been completed includes the 2019 project when the Mansfield Parks Department completed improvements and opened the North Main Street Trail including lighting and a 14-foot-wide pedestrian trail across the North Main bridge. The bridge also has RGB lights that illuminate the pedestrian trail at night and the colors change throughout the year.

Improvements to South Main Street have also been completed, and include back in angle parking, wide concrete sidewalks, decorative pavers, landscaping, bike racks, benches, and decorative lighting. Allen said this project was done to improve the aesthetics of the area, make it more pedestrian friendly, and to set the stage for new private investment in Historic Downtown.

The City has also launched an official downtown website www.historicdowntownmansfield.com. The website includes a community event calendar, information for residents and visitors, and a business directory and will continue to expand with information and amenities

The city has also recruited a private global investment firm that has done a large number of revitalization projects on the historic Main Street in Dallas to build a high-density, mixed-use development on the city-owned four-acre tract on Smith Street. For that project Mansfield is working with Hoque Global. Hoque Global builds mixed-use developments, as well as unique projects like co-working innovation centers.

“Part of their firm also includes the restaurant group DRG Concepts, which is responsible for concepts like Wicked Butcher, Dallas Chop House, Dallas Fish Market, and Wild Salsa,” Allen added. “We are excited to partner with them on this project, which will bring Mansfield’s first ever structured parking to the city and to downtown. 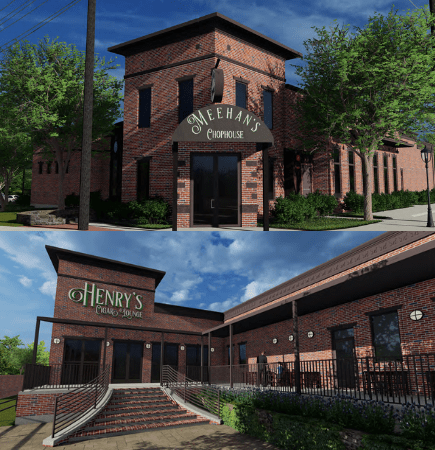 Another development in the works is a new fine dining chophouse. That restaurant will be housed in the old Mellow Mushroom building on the corner of Broad and Main St.

“The City entered into a TIRZ agreement with Meehan Properties in the form of a seven-year forgivable loan, of which a portion of the loan will be forgiven for each year the business remains in operation,” Allen said.

Mansfield-based Meehan Properties plans to bring a restaurant and cigar lounge, creating one of Mansfield’s only fine-dining restaurants in town. Just south of the property, Twisted Root Burger Co. has also reopened, and the property owners are continuing remodeling to reopen with additional new concepts, such as Del Toro BBQ.

And for those in the holiday spirit, get ready because the big thing this week is the Historic Downtown’s Hometown Holidays. Holiday decor is being installed the first week of December.

Allen concluded, “this will be the first year that the annual Hometown Holidays is being hosted in Historic Downtown. The event is a two-day festival, with Main Street shut down for a midway, including a ferris wheel and carousel. There will also be entertainment at the LOT, pictures with Santa, craft booths, a holiday market, tree lighting and more.” We have all the details in our Hometown Holidays Know Before You Go article.