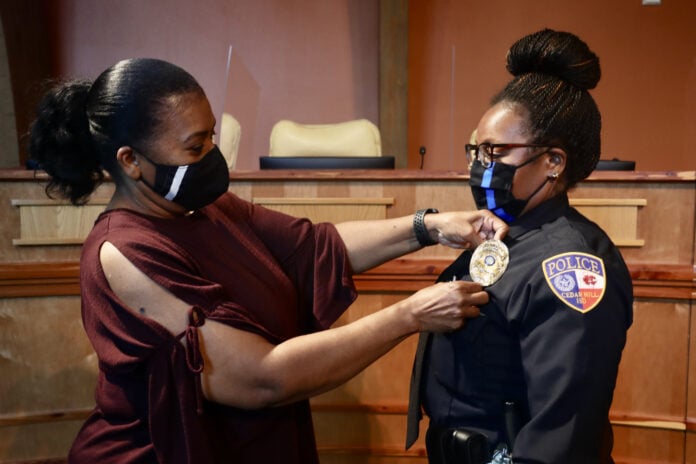 Officer Atkinson Was Sworn In Yesterday

“It was a great ceremony,” Atkinson said. “She raised me to be the person I am today. She’s been my role model.”

“Officer Atkinson brings a wealth of experience working with youth in schools and mentoring young people,” Hawthorne said. “She is a real go-getter and always displays a great deal of professionalism.”

Returning to the Land of the Longhorns

Atkinson is elated to be back in Cedar Hill. She may have moved or worked in Duncanville or Dallas over the years, but she always comes back to the Land of the Longhorns.

Atkinson attended Highlands Elementary School in the late 1980s before graduating from Duncanville High School (where she competed in volleyball and track) in 1996.

When it was time for college, Atkinson chose Northwood University of Texas in Cedar Hill, earning a degree in Business Management.

Her professional career brought her to the Civil, Family and Criminal Courts in Dallas, and the Texas Attorney General’s Child Support Division – all in Dallas.

She eventually entered law enforcement with Dallas ISD – working with secondary scholars in that district for nine years. She was part of a mentoring program there called “Bigs in Blue.”

A Passion For Working With Kids

While doing all of that, she raised two sons – Joshua and Jeremiah – who went to Cedar Hill. Joshua played Safety on the Longhorns’ State Championship Football Team in 2014.

“Something keeps bringing me back to Cedar Hill,” said Atkinson, who is a proud grandmother of four. “I enjoy working with kids. That’s why I like working for an ISD Police Department. Everybody is friendly and welcoming at CHISD. We talk to the scholars about life, and when they get to know police officers, we become more relatable to them.”

In her free time, Atkinson enjoys spending time with family and traveling.

At the end of the swearing-in ceremony, Atkinson confirmed her commitment to Longhorn Nation with a “Horns Up.”