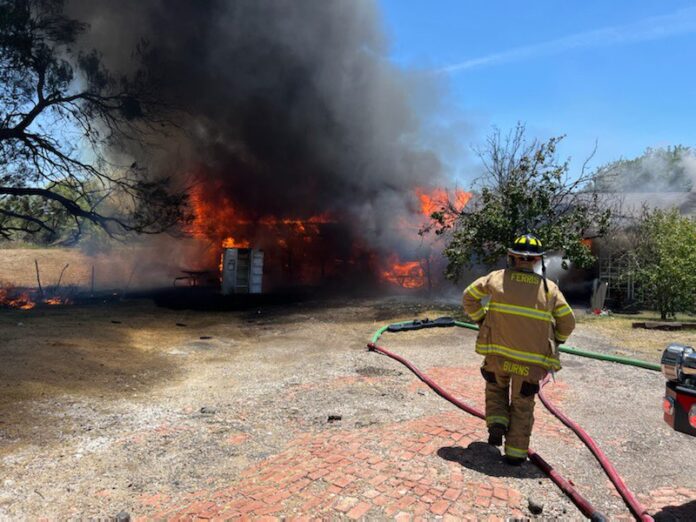 The city’s fire department was called to the first fire around 1:34 p.m. Tuesday, July 26, a brush fire, in the 500 block of Ewing Road. The fire began due to a property owner attempting to saw steel. The fire was extinguished by the Ferris Fire Department with no property damage or loss of life.

Around 1:55 p.m. while the Ewing Road fire was still being extinguished a second call came in regarding a structure fire in the 600 block of FM-983.

“The structure fire began in the barn and moved to the house quickly,” said Ferris City Manager Brooks Williams.”

The fire was started when someone was burning trash that ignited the barn.

One of the members of the city on the scene, Chief of Staff John DeLeon, quickly alerted the four individuals inside the burning residence assisting each one out of the home safely. The home quickly burned to the ground with no loss of life or injuries.

“When we arrived, everything was still in the shed outside and in the next 15 minutes it spread into the entire house,” DeLeon said. “There was someone in the backyard trying to put the fire out with a water hose. I went in to get the rest of the residents out, it was an elderly female and two other occupants. I was able to get them out. Within minutes of getting them out of the house, a cloud of black smoke just came out and before you know it the house was engulfed in flames. Fortunately, we got everyone out just in time.”

“Heed the warnings that you are hearing on television,” Williams said. “Quit burning and don’t do things that cause sparks because it is too dry out there. We have not had any rain and even when we get some it is still going to be too dry.”

Williams thanked all the fire departments and first responders who showed up to the fire and contained it quickly “so we didn’t have a disaster beyond this on our hands,” he concluded. “The house went up quickly, from the time we got a call to the time both structures were fully involved was a matter of minutes.”

As a reminder the Ellis County Commissioner’s Court issued a countywide burn ban effective June 28, 2022. The burn ban is in effect until further notice and includes all unincorporated areas of Ellis County, the City of Ferris and ESD #5.