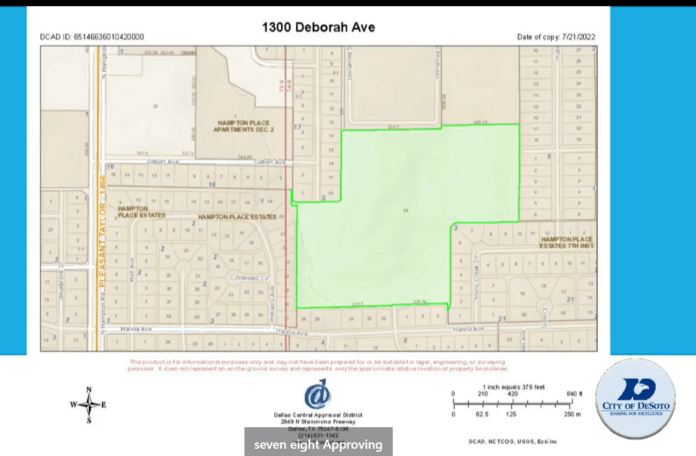 Zoning proposal Z-1476-22 faced more commentary on social media than most proposals we have seen recently. It came before the DeSoto Planning and Zoning Commission on Tuesday evening, July 26 and saw what seemed like an almost endless stream of citizens voicing their opposition to the plan.

It was noted that notification of the hearing signs were posted but had been moved twice. The notice of the public hearing was published in Focus Daily News on July 10, 2022 as required by law. That publication notice also states that the measure would come before the City Council on August 16, 2022.

The speaker representing Castle Rock, Bryan Blagg, addressed the Board saying he felt the minimum home size would be closer to 3,000 square feet than the 2,000 requested. He said the reason they wanted to add the 16 additional home sites was to maximize the use of the land and to provide more affordable housing. He continued that it was his view that people in the area did not want such large home sites because of maintenance and similar issues.

On a personal note, when I moved to DFW in 1987 I was told people moving here what small lots. However, after buying a “postage-stamp size” lot, I sold that home and purchased another with a much larger lot.

In addressing the question of whether investors would buy the homes and use them as investment properties for rental income or to flip for a profit, he said Castle Rock can’t restrict buyers. Of course, their intent would be to sell to people that need homes. He continued by saying “There’s a multi-family development to the north, (and) we could build a fence to separate us. He said the homes would have a driveway down the side of the house with a large concrete pad in back of house and it would be a front loaded driveway, but homeowners would park in the rear of the home. 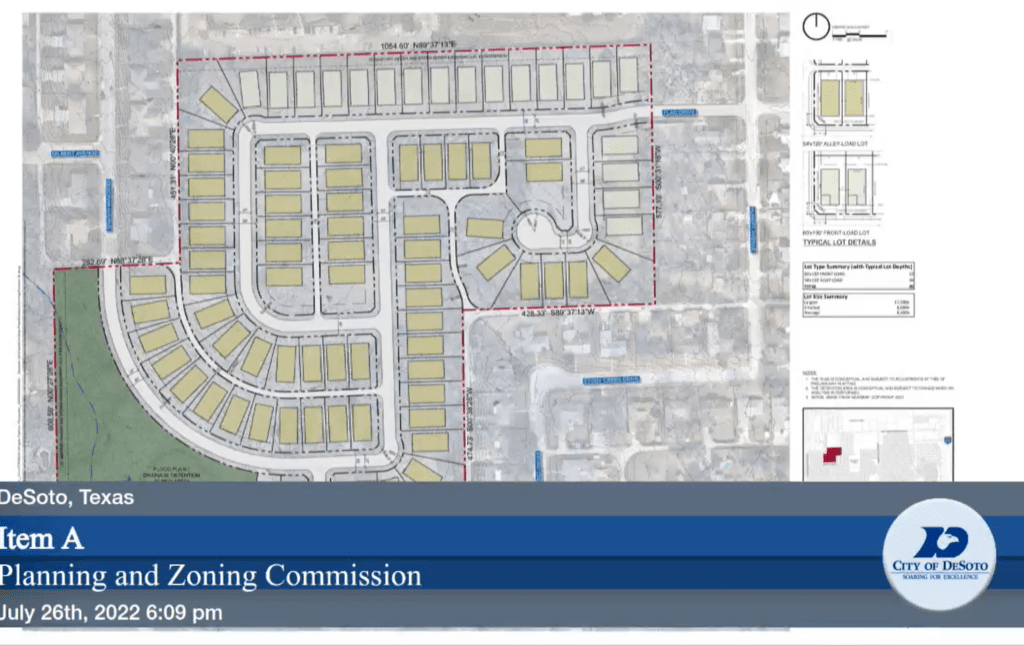 DeSoto resident Ed Landwhere expressed his opposition. He said he had driven around the area after learning of the proposed development. Landwhere pointed out that the property owner has owned this land for 20 years, and could have developed it a long time ago. He said when he knocked on doors in the area and spoke with people about the plans ‘they were astonished’. He continued that DeSoto doesn’t need any more density in the city. “This is not what DeSoto is about.”

The next speaker said, “We need a copy of site plan with notifications that goes out to the residents that are impacted with more than just an explanation.” She continued that she really thinks a site plan would be a better notification. She too expressed opposition to the proposal because of the density issues. “Police and code enforcement are already strapped for personnel, let’s not add on to that problem,” she concluded.

The next speaker, Ms. Bivens, was also opposed. She said DeSoto already has issues with code enforcement having a very difficult time. “There are issues in this city that we’re not fixing, we can’t keep adding more people when we can’t manage the residents that live here now. I’m emailing representatives and the City Manager and I keep being told ‘they’ll get back to me’. We are going down instead of up. I am opposed to anything new being brought to the city of DeSoto, until we can fix the issues we already have.”

Another comment concerned the development at Beltline & Westmoreland where all the trees were stripped. Developers then walked off, and now weeds are overgrown in the area with hundreds of cedar trees. She said she is concerned about the fire hazard. Mowing is supposed to be maintained and is not. In her opinion the city isn’t addressing an issue that could cause damage to homes and property.

Ms. Terri Smith said she doesn’t see any way this project will enhance DeSoto. “I don’t want DeSoto to become a dumping ground for bad projects,” she said. “Also, “I’m concerned these properties will become rental properties. I looked up Castle Rock (the reviews were not good) … that’s all I will say about that, but I am in total opposition.”

Erika Estes was also in opposition. She said she has been a DeSoto resident for eight years and is a substitute teacher and very invested in the city. “Not only are we strapped for code enforcement and police, the fact you’ve owned property 20 years is a red flag.” She continued another red flag is reducing from the minimum of 8000 sq ft in the middle of a boom with no idea what will happen in the future. Another red flag, potential investors coming into community. “Castle Rock has a 1.0 rating with over 200 complaints and the gist of the comments was ‘run, run, run’.”

Mary Harper has lived in DeSoto 53 years and watched this area. “I can see this area from my porch. There’s a creek that goes behind there. Where is that refuse going? We’ve had a lot of problems with that creek. Do you know how many rent houses are backed up to this property? They probably aren’t even aware of this development. Those of us that have lived here forever care about the police, care about the fire department, and care about our resources. I think we need to leave it alone, we don’t need more houses.”

Ty Underwood of SLJ (Sandy Mac Partners, LP) owner of the property, said “We’ve been trying to sell it. It’s difficult because it doesn’t have frontage on a main street. We think we should be thankful that a developer will come in and create more housing supply.”

At the closing of the hearing Commissioner Scott McDonald said the zoning ordinance is antiquated. Therefore, one of the reasons there are so many PDs in the city is due to the outdated zoning ordinance. The idea that you can economically develop property that’s larger is history. “I don’t know if this is a good project, or a bad project, I can’t predict the future,” he said.

Commissioner Preston Gilstrap stated, “I’ve owned three houses in DeSoto. My retirement home is here. DeSoto has a je ne sais quoi. There’s something about a community that maintains its integrity – what we want to see, need to see, what we have to see. We are here to listen to the citizens and then make recommendations to the council. Code needs to be updated, zoning needs to be updated. But we can’t jump at everything that comes down the pipe. My grandpa used to say ‘all money, ain’t good money.’ There are two to three families living in houses. These developments take away from the atmosphere. I don’t have a problem with developers. McDonald is right, we need all the development we can get. But we need it to be pristine.”

The vote as 4-1 in denial with Commissioner Stone presenting motion and only Commissioner McDonald voting in favor.