An improved heart led to a change of heart for DeSoto Eagles basketball coach Chris Dyer.

Dyer, 60, announced his retirement last spring after 37 years of coaching. He said the decision came after a physical he received following spring break. Almost 80 percent of his arteries were blocked, so he had surgery to correct the problem.

Not only did it bring about a reversal in his health, it brought about a decision to keep doing what he loves – coaching basketball, specifically, coaching his beloved Eagles.

“I woke up feeling great. The sun was brighter, the grass was greener,” Dyer said. “I thank the Lord every day for fixing my heart like he did, so I decided to come back. I feel great. People say I seem more vibrant.”

Certainly, Dyer hasn’t lost any of his touch. As of the writing of this article, the Eagles were 14-7 overall and 7-2 in District 7-6A with a four-game winning streak. They were also ranked 12th in the state by the Texas Association of Basketball Coaches.

Eagles only have two losses in district

District 7-6A features four state-ranked teams. As of the most recent TABC poll, along with DeSoto, Grand Prairie was ranked 10th, South Grand Prairie is 14th and Waxahachie is 17th.

And while he loves winning, as does any coach, Dyer simply loves being part of the game. He also loves coaching the game in DeSoto, where he has called home after relocating from Akron, Ohio, many years ago. He is in the Akron High School Hall of Fame for his basketball playing career at the school.

“I came down from Akron on vacation and I never went home,” Dyer said with a laugh.

Dyer admits some things have changed since his return. For example, he tries not to get as excited during games, he said.

“I try not to get as agitated at times, but I’m a coach, so it’s hard,” he said, chuckling. “Coaching itself is so hard, because you can’t do anything while they’re on the court. I can only root them on. Sometimes I feel more like a spectator.”

But Dyer is anything but a spectator. He’s being humble, and his resume’ shows it.

He has coached nine teams to the state tournament and won five state championships, including three at DeSoto in 2003, 2009 and 2016. His career record entering this season was 767-192, and he has sent many players on to play in college, including schools such as Duke, Baylor and SMU, along with several to the professional ranks, either in the NBA or overseas.

Before his arrival at DeSoto in 1998, the Eagles had never won a basketball playoff game and advanced to make the playoffs just once in 1993.

In addition to his work at DeSoto, Dyer coached in the Global Games in 2002, when the U.S. team defeated Yugoslavia for the gold medal. He was also the winning head coach for the West Team in the 2013 Jordan Classic held at the Barclay Center in New York City, having previously coached in the game as an assistant in 2006.

In 2016, the DeSoto High School competition gym was renamed in his honor.

But most of all, he loves seeing his players go on to productive lives.

“The best part is seeing them do something with their lives. They come back with their families, and that’s the greatest feeling, seeing them happy and successful in whatever they are doing,” he said.

Dyer said his favorite memory didn’t happen on the basketball court. It was helping one of his players get baptized three years ago, current SMU sophomore forward Feron Hunt.

“I think about it every day. He was baptized the day before Christmas,” Dyer said. “I said, ‘You have to tell your mom.’ He said, ‘Oh no, this is her Christmas present.’ She showed up and she was very, very happy.”

Downtime is spent biking, swimming and walking his dog

Dyer spends some of his downtime riding his bicycle and walking his dogs. He also likes to swim. This past year, as part of his rehab, he participated in four distance bike rides.

It’s also another reason he loves living in Texas.

“We don’t have to ride in the snow, I really like that,” he said. “I like to walk my dogs, bike and swim, and it’s better to do all those things down here where it’s warmer.”

As for how long he’ll stay at the helm of the Eagles, Dyer only said that he’s enjoying coaching – and life itself – to the fullest.

“Whatever the Good Lord has for me, he’ll take me where he wants me to go. I’m a blessed man,” he said. “I tell everyone if you get a physical, get an EKG. I had a chance and I’m glad I took it.

“I’m just thankful for each and every day. I know what could have happened. The Good Lord gave me a new lease.” 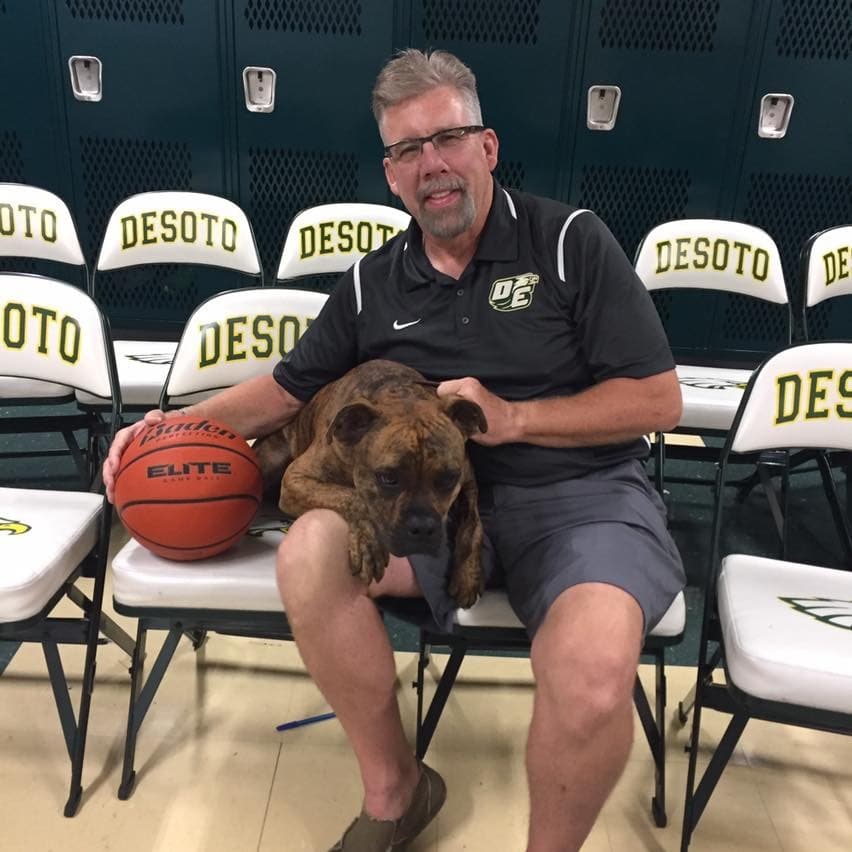