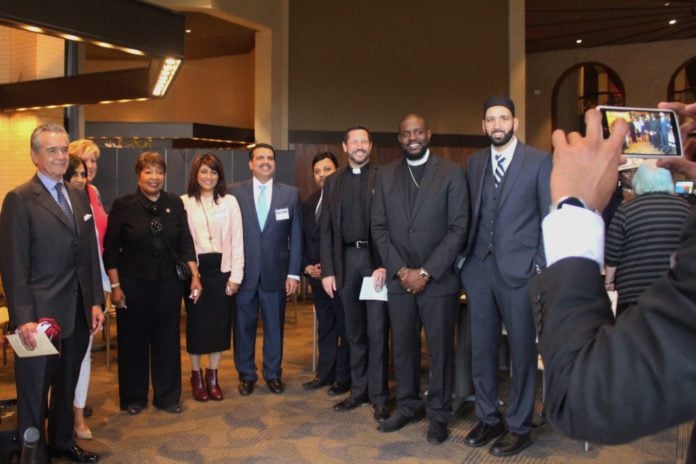 The keynote address was given by award-winning author and activist, Reverend Dr. Michael W. Waters. In her opening remarks, Congresswoman Johnson spoke about finding strength in prayer now more than ever.

“We must pray for the strength to push forward and organize so that our voices can be heard,” said Congresswoman Johnson. “I believe in this country and I believe in each of you. This is what democracy is all about- citizens getting involved, challenging ideas that are contrary to our values as a democratic nation, and working with their leaders to enact the change they wish to see.”

The congresswoman also spoke on the importance of diversity, and recognized it as one of our nation’s greatest strengths.

Reverend Dr. Waters delivered a rousing address that told the story of two Dallas[es]. His keynote address highlighted the economic and social disparity that exists today in Dallas (between the North and South). Before concluding his speech, Reverend Dr. Waters challenged the ecumenical community to work to serve all communities and to stand up for justice everywhere.

The breakfast was attended by approximately 100 leaders from the North Texas faith community. Clergy members from the Jewish, Muslim, and Christian communities gathered for the breakfast. The event served as a time for all the various leaders to offer prayers for the citizens of North Texas.

It was also an opportunity to discuss ways believers of different faiths could collaborate to better serve their communities.