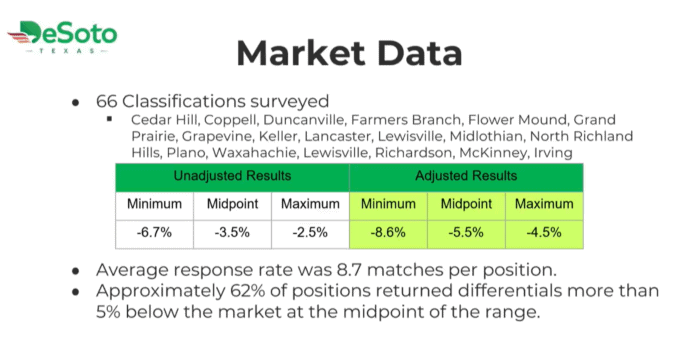 DESOTO – At this week’s DeSoto City Council meeting, the council voted unanimously to allow the City Manager to include funding in the fiscal year 2023 budget to implement the compensation changes recommended by the Classification & Compensation Study. This means DeSoto will use the Market Average for General Government employees and the Top Third Market data for Civil Service employees.

In December of last year  the City Council authorized a budget to fund a Classification and Compensation study, which was completed by a third-party contractor. Important to the study was the idea of understanding the increased turnover and difficulty in filling some of the open positions in the city and to ensure the DeSoto’s pay plan is in sync with other Dallas/Fort Worth cities.

According to City of DeSoto Human Resources Director who presented the findings at the meeting, she said this pay raise study was to “ensure fair wages for the City of DeSoto employees.”

Several people spoke at the meeting including one woman who was there on behalf of her son who said officers are finding higher wages in other cities pointing out pay is crucial in retaining employees who miss church and holidays and work no matter the weather conditions.

“Working in these conditions with low pay can cause a person to seek employment elsewhere or another profession all together,” she said. “The climate of police work has changed and there is a shortage nationwide for first responders.  In order to replace these individuals or to retain these individuals there must be competitive pay.”

There were also 20 comments that were read into record at the meeting with all in favor of a pay raise for Police Department asking for an “honest level of pay” overall.

Working To Be Competitive to Attract & Retain Top Talent

DeSoto Mayor Rachel Proctor said “I know that a lot of emphasis has been put on our first responders. While I definitely agree I want to say that all of our staff are our heroes. All of our staff, and that is why the emphasis even though the initial concerns were coming from police and fire we made sure that across the board we were competitive to retain and attract top talent in every department whether that is janitorial staff all the way up to the top seats here at the city. I want you all to know this is not an issue that council has taken lightly.”

Proctor also mentioned there was clearly something different about this study than had been done in year’s past.

Staff also suggested that annually a salary survey be conducted to look at the market to see how far it is moving – “is it moving faster in some places than in others.”

DeSoto City Manager Brandon Wright added “Bringing the medium up to a certain level, that is relatively easy figuring out where you are off. Here it was recognizing that we had step scales that were so large. That was a major disadvantage to us on this one.”

Wright said what is important looking forward is that the city is looking at both how the market is moving and marketwise how people are being paid through scale to stay competitive.

The indicators used for comparison included geographic proximity and population size and it was noted target organizations were also identified for their competition with the city for employee recruitment and retention efforts.

“The City of Plano is widely known in the region as offering the top compensation,” staff reported and “while Plano’s minimum job requirements are different from DeSoto’s, they require all police officers to have a bachelor’s degree.”

For non-civil service jobs staff presented a $15/hour minimum wage, with 12 steps (3.5% each) in each pay range (minimum to maximum), while also increasing the midpoint of each classification range by roughly seven percent. This in turn reduced the time it would take for an employee to go from minimum to midpoint in six years while also adjusting a midpoint to the market average.

For Civil Service positions, the revisions outlined were about moving the positions to a classification pay structure like Plano’s Police Department. The changes include an increase in starting pay and fewer steps for Fire and Police.

City staff considered three alternatives for setting the midpoint of these ranges. The alternatives included market average based on an average of the classification ranges reported from the peer communities surveyed, a top third that was based halfway between the average and the top of the market data from peer communities and a look at the city of Plano Civil Service jobs.

The pay raise was recommended for fiscal year 2023 in two steps. First, the three percent COLA going into effect October 1 consistent with past practice, which was in the proposed 2023 fiscal year budget. Next, a second implementation for the pay plan changes recommended by the study, which will be effective January 1, 2023, in lieu of the planned two percent merit increase applied upon each employee’s anniversary date in past years.

Another consideration in Desoto was the lower cost of living in the city compared to Plano.

Staff also noted that maintaining the new pay plan in future years will be critical and will result in an increased expense on an annual basis.

DeSoto Police Chief Joe Costa said he was pleased with the results and told his staff “Congratulations to everyone. Last night, as you all know, the city council approved pay raises for all city employees.”

He said this move by council is a positive step.

“Even though this was not the plan equal to Plano that the consultants recommended, it is still a very generous pay raise,” he added. “We can all be disappointed that it is not the Plano plan, but we should all be appreciative of the fact that the council agreed that we needed a decent raise and agreed to continue to evaluate so that other changes may be made in the near future and not four to five years out.”

Costa said he was encouraged by council’s move and concluded that the police department salaries will continue to be evaluated and compared with market and above in the future.