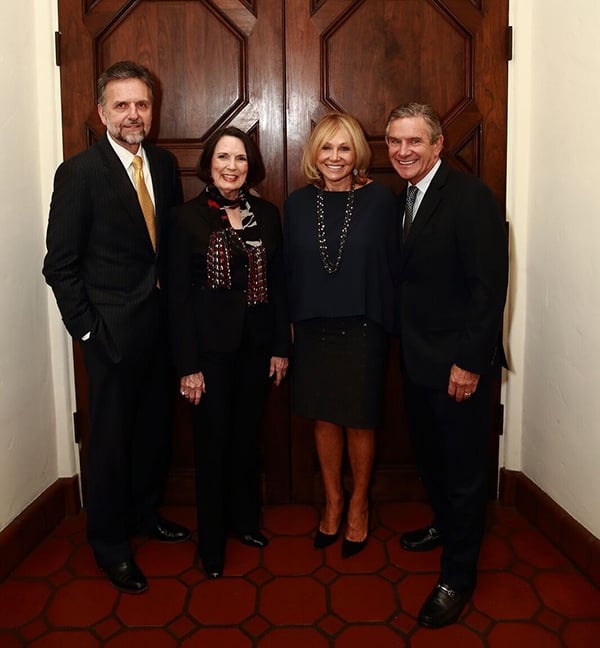 Artscape Reimagined 2017 Chairwoman Kaki Hopkins made several exciting announcements at Jan. 31 at the DeGolyer House in the Arboretum. The garden’s popular fine art and craft show will feature an inaugural Great Contributor to Art Award. Craig Hall is being honored for his many contributions to public art.

Hopkins said, “Craig Hall embodies the spirit of this award. He is someone who collects art not for himself but for the benefit of the communities in which we live and work, and we are excited to honor him.”

The Great Contributor to Art Award will be presented to Hall at the Artscape Award and Auction Dinner in Rosine Hall on May 12. This aptly named prize was designed and contributed by Gary Lee Price, whose Great Contributors exhibition at the Arboretum was the inspiration for the award’s name.

“I am a strong believer in the importance of public art and the incredible effect it can have on its audience,” said Craig Hall, Chairman of HALL Group. “Art has the ability to touch the soul and make people think, and it should be shared openly and democratically. The Dallas Arboretum, through its public art exhibits, sculptures throughout the garden and Artscape, is a great example of how our city is embracing public art, and I am glad to be a part of it.”

Craig Hall is an entrepreneur, businessman, New York Times bestselling author and philanthropist. A lifelong art collector, Hall believes art nourishes the human spirit and can make a profound difference in people’s lives. HALL Group properties display an extensive contemporary art collection. At HALL Park in Frisco, Texas, more than 200 sculptures and works of art can be found throughout the park and within building lobbies. At KPMG Plaza at HALL Arts in the Dallas Arts District, art with a focus on Texas artists is prominently featured throughout the Texas Sculpture Walk, and several more pieces by national and international artists are located throughout the development.

Hall has received numerous awards, including the 2002 Obelisk Award from the Dallas Business Committee for the Arts for his long-time support of Texas artists; induction into the Horatio Alger Association for Distinguished Americans; induction into the North Texas Commercial Real Estate Hall of Fame; and the Ring of Honor of the Entrepreneurs Foundation of North Texas. He is also the recipient of a Lifetime Achievement Award from the Mortgage Bankers Association.

Hopkins said Artscape Reimagined 2017 will feature more than 100 outstanding professional artists from around the country. The art festival kicks off with a member preview on the evening of Friday, April 28, opening to the public Saturday, April 29 and Sunday, April 30. The garden’s spring backdrop with thousands of flowers and lush landscaping provide a perfect natural setting for artists to showcase their creations.

Now in its 11th year, the show features a variety of mediums including painting, sculpture, 2-D and 3-D mixed media, photography, fiber, ceramics and more. It is titled Artscape Reimagined 2017 to denote the many innovations introduced this year, including:

In addition to Artscape, guests will be able to enjoy ZimSculpt, a world renowned exhibition of modern Zimbabwean stone sculptures that will be incorporated into the garden. It is the first time for these sculptures to be shown in the southern U.S., and they include more than 100 hand-carved pieces that are available for purchase. Two Zimbabwean artists will also demonstrate live their artistry as they carve stone into modern sculptures right in front of patrons.