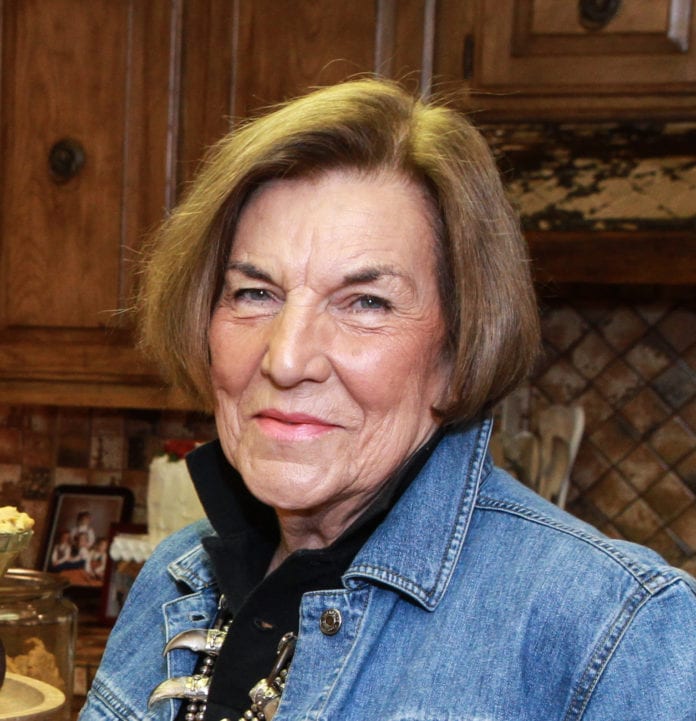 Surrounded by loved ones, western wear matriarch, Patricia (“Pat”) Whitten Cavender, passed away peacefully on July 31, 2019 at her home in Pittsburg, Texas. Pat’s life exhibited a deep devotion to God, family, friends and community. She was born on August 5, 1932 in Idabel, Oklahoma, to Milton N. Whitten and Myrtle Elkins Whitten.

Pat Cavender was a member of the First Baptist Church in Pittsburg, Texas and was married to the late James Robert Cavender for 63 years. She was known as Grandmother to her grandchildren, and affectionately as “Miss Pat” by many. However, she was more fittingly labeled “Boss Lady” by 16-time world champion rough stock cowboy, Jim Shoulders.

Pat grew up in a rodeo and ranching family in Idabel, Oklahoma. At a young age, she was doing ranch chores, working the rodeo ticket booth, and then the stopwatch for the timed events. After graduation from Idabel High in 1952, she worked in Dallas, Texas. She married James Robert Cavender in 1955, and they made Pittsburg their home in 1957. Together, they founded Cavender’s Boot City in 1965. With hard work and the help of family members and many loyal and dedicated associates, it became the largest western wear dealer in the United States. Today the Texas-based company has 82 stores in 11 states.
Pat Cavender was a loving and hard-working wife, mother and grandmother who always put others first. She continued to travel the country, decorating the Cavender’s stores, up until last year when she became ill. She, along with the family, received many accolades over the years, including an induction into the Texas Cowboy Hall of Fame.

Son Mike said of his mother, “You could not have found a better mother if you had custom ordered one. She was simply the best. She was always there, helping us at church, Cub Scouts, baseball, you name it. She hauled us everywhere, making it to all of our ballgames and school functions. Always made sure we did our homework and excelled in our endeavors. Whatever the task, Momma could get it done. Make no mistake, she set the pace for the entire family, as well as at Cavender’s. She out-worked us all.” Daughter Traci, at a very young age, begged her mother, who was working non-stop, “Come on Momma. Sit down and take a break and rest.” to which Momma replied, “I’ll rest in my grave.”

A Woman of Many Talents

She was an award-winning and accomplished artist who donated many paintings for charity auctions. She could cook and decorate with the best of them. She was known for her giving nature, her art, her design and decorating ability, the delicious feasts she served, as well as her quick wit and wry sense of humor. Many a traveling salesman looked eagerly to enjoying a delicious homecooked meal at Miss Pat’s table. Mike joked, “She was the original pre-prison Martha Stewart.”

Son Joe said of his mother, “I feel very fortunate and blessed to have had a mother like her. She was very talented in so many ways; always put others first and she was a servant at heart. She has left a lasting legacy for our family and will have enduring memories, especially of the great times we had during the Thanksgiving and Christmas holidays.”

Youngest son Clay said of his mother, “She was the best mother I could ever ask for. She always thought of others first and was one of the hardest workers I have ever known. She taught me so much and she will be truly missed by everyone that has known her.”
Pat Cavender was preceded in death by her parents, her husband, James, and siblings Milton “Jack” Whitten, Jr., Virginia Rasp, Billy Jean Whitten, Mary Jane Brown, Bobby Whitten and Dimple Sharp.

Memorial donations may be made to the American Cancer Society