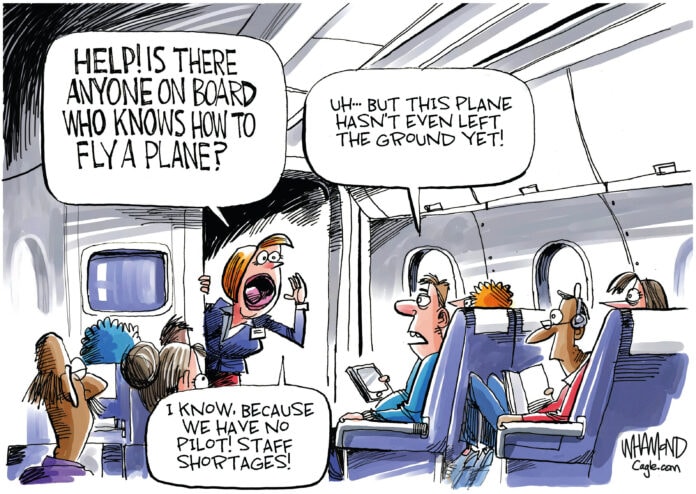 Or, as Oliver Hardy (my wife) might say to Stan Laurel (me), “Well, this is another fine mess you’ve gotten us into.”

By the way, please don’t tell my wife I compared her to Oliver Hardy. For one thing, she’s much slimmer and has no mustache. However, I am slightly more portly than Stan Laurel (hey, I can say that, you can’t) and in this equation she is indeed the brains. Since I’d hardly call me the brawn, not sure where that leaves me.

In this scenario, however, it did leave both of us stranded at the gate at DFW Airport recently.

The lovely Mrs. Junell, my wife, and I were set to board a flight to Denver to see our beloved grandbaby Natalie Wren, who was set to turn four months old on the day after this debacle. One of these days we’ll get a good laugh out of how her pawpaw’s timing meant Mamamaw and I had to celebrate with her on a video chat – when she is old enough to understand what a video chat is. With the way kids are learning technology faster than the Dallas Cowboys say goodbye to the playoffs, that should be, what, next week?

So, we’re at the airport, waiting to get on our plane. Plenty of time, a couple hours early, grab a late lunch. Then, on the way to our flight, we stop to get a quick cup of coffee before getting on the flight.

I did not hear the last call to board the plane. Junell can be excused as she was in the ladies’ room. Why did I not hear the call, even though I was literally a Luka Doncic 3-pointer away from the gate when they made the announcement? I was focused on how much hazelnut the young server should put in my coffee.

Hey, when it costs a second mortgage to get a grande (that’s the medium, right?), you want to make sure it tastes perfect.

So, we ran over and missed the door by about one minute. I know because our ticket read the gate closes at 5:34 p.m. and the clock on my phone rolled to 5:36 as we were talking – which took about a minute.

The young man would not let us on. Even when I pleaded and told him we were on our way to Denver to see our sweet little four-month-old granddaughter. Perhaps it was my imagination, but I swear he responded with one of those looks that said, “Kids, ugh.”

I could have reminded him that he was a child not so long ago, but given that I’m 35 years old 28 times over (you’re counting, aren’t you?) and the lovely Mrs. Junell reminds me daily that I’m still not grown up, well, you get the point. But I do love kids, especially my adorable three granddaughters (Gracie and Zoe across town from us and, of course, Wren in Denver), and the more I tried explaining to the guy that we desperately wanted to go see one, the more aloof he became.

The only response I could get from him repeatedly was “That’s fine.”

I understand rules are rules and we were indeed late. I repeat, a minute – two tops. Truly that close.

I also want to make it clear that I did not curse or raise my voice at the young man. You get nowhere by being nasty.

You also get nowhere by lollygagging around discussing the correct amount of hazelnut, either, it seems.

Adding to my frustration, I watched as they escorted another young lady OFF the plane, the only reason given being she was flying standby and apparently ANOTHER standby passenger had thrown a fit. I don’t know if said fit thrower worked for the airlines or what, but that made about as much sense to me as them not opening the doors to let us on?

I must admit I did ask that very question. “Let me get this straight, you can’t let us on, but you can take her off?” His response, yep, “That’s fine.”

“We have tickets, assigned seats,” I pleaded. “That’s fine,” he responded, though he did add that flights are routinely oversold. Thus, stop to discuss hazelnut and a non-coffee drinker or someone not in the mood for a cup of Joe at the moment can nab it.

Which brought me to my next question. “If the plane holds, let’s say 300 people, why on earth would you sell 309 seats? That makes as much sense buying a pair of jeans with holes in them.”

Have you seen what jeans cost today? Why would you want LESS fabric and pay MORE?
Anyway, the young lady was left to wait, probably for at least a day it seemed. Junell and I got a refund and decided to come home and unpack into our new house, something we were going to do AFTER a week of R&R in the mountains.

Talk about going from one extreme to the other. The cool, crisp getaway in the mountains turned into three hours of putting a patio set together with only an allen wrench the size of my thumb in 101-degree temperature, even with the patio covered.

After which my lovely wife said sweetly, “You know, you could have brought that in the hallway where it was air-conditioned and put it together before taking it back onto the patio.”

Comedy, it’s all about timing. So is getting a cup of coffee.

We Should All Learn To Fight Like Coach White