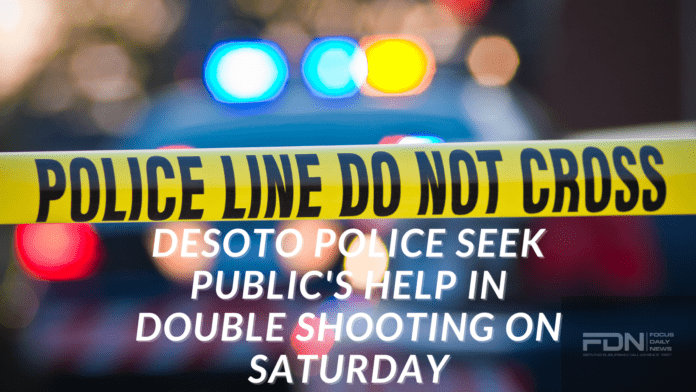 Update: The DeSoto Police Department has a suspect in custody for the shooting/capital murder that occurred in DeSoto, Texas on Saturday, May 15 on S Elerson Rd. Detectives are still working diligently on the case. More details tomorrow.

DESOTO, TEXAS—A 34-year-old Midlothian Man is dead and a 29-year-old female passenger in his car, also from Midlothian, was wounded following a double shooting Saturday evening at approximately 9:05pm on the 300 block of S. Elerson Drive in DeSoto.

DeSoto Police and Fire Rescue Department paramedics arrived quickly at the gate of the property on South Elerson Drive after the shooting was reported to find 34-year-old Randall Thornhill, W/M of Midlothian, shot multiple times in the driver’s seat of a white 2008 Mazda 3. His passenger, 29-year-old Heather French, W/F, also of Midlothian, was wounded but did not have life-threatening injuries. A five-year-old child was found unharmed in the backseat. Their vehicle had been waiting to enter the gate at a large “ranch style” property when the shooting took place.

Mr. Thornhill was pronounced deceased after being transported to the hospital and Ms. French was also treated at a local hospital for non-life-threatening injuries. Preliminary information provided to Detectives indicated that the suspect was a young Hispanic or light-skinned Black Male wearing a “hoodie,” possibly hunter green in color, who reportedly fled the scene on foot after the shooting. The suspect remains at-large. Until more information is gathered, DeSoto Police ask citizens who reside in the area to be extra vigilant and to report anything suspicious immediately to police by dialing 911.

Detectives are also asking residents who live along S. Elerson Drive, Northlake Drive, and Eagle Drive to check their cameras from last night from 8:45pm to 9:45pm to see if their camera systems captured any information about this case. Anyone with information can call our dispatch center by calling 911 or by calling 972-223-6111, contact Crime Stoppers, or contact DeSoto police anonymously via “Tip411” from our website at http://DeSotoTexas.gov/Police.

This is an active investigation and information will be released as it becomes available. Media contact is PIO Cpl. Pete Schulte #329, who can be reached at pschulte@desototexas.gov and/or via city cell at 972-504-5846.