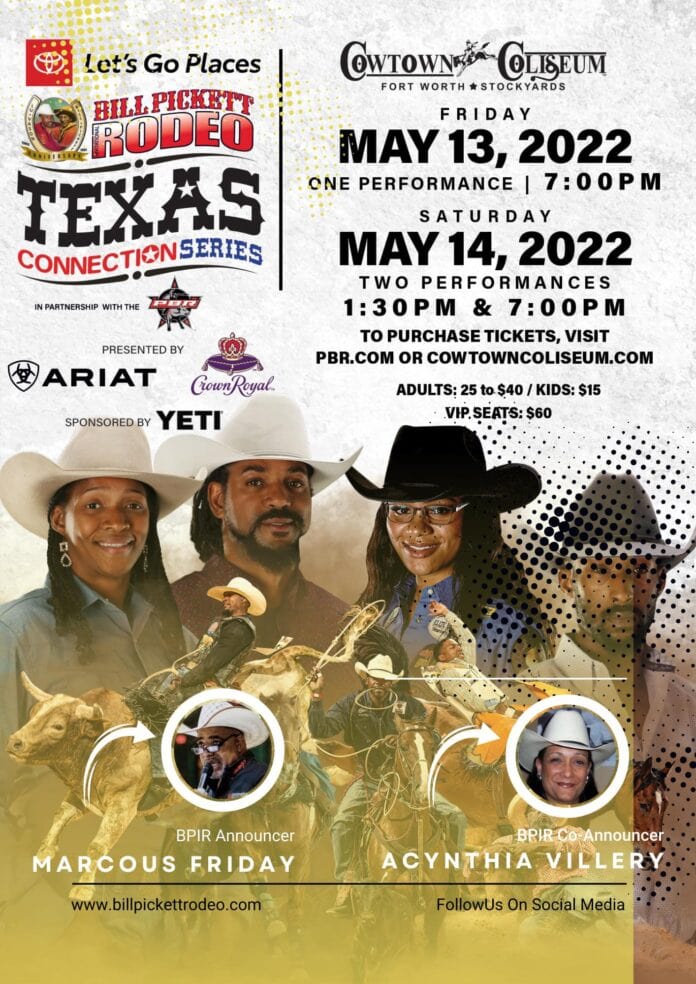 Fort Worth, Texas (May 10, 2022) – Bill Pickett Invitational Rodeo (BPIR) and Toyota have announced the Toyota BPIR “Greatest Show on Dirt” Traveling Museum, which will tour the country telling the stories of Black Cowboys and Cowgirls who have traveled the U.S. with the world’s leading All Black Touring Rodeo.

“The Greatest Show on Dirt” Traveling Museum will host guests on Friday, May 13 and Saturday, May 14, outside the Cowtown Coliseum at Fort Worth Stockyards, prior to three performances of the rodeo’s Toyota Texas Connection Tour presented by ARIAT and Crown Royal and sponsored by Yeti and Upscale Magazine.

The museum will then tour the country alongside the BPIR for their 2022 Texas Connection and Legacy Tours, with stops including Atlanta, Ga. (August 6-7); Los Angeles, Calif. (July 6-7); Oakland, Calif. (July 9-10); and the Washington, DC/Upper Marlboro area (September 24) for the 2022 Bill Pickett Invitational Rodeo Finals.

The Museum – housed within a 48-foot trailer wrapped with a striking landscape of Black rodeo cowboys – will feature:

The Bill Pickett rodeo began in 1984, when entertainment impresario Lu Vason had a vision to entertain and educate audiences and to create and preserve the historic contributions of African American cowboys and cowgirls. He named the rodeo after legendary Black cowboy, Bill Pickett, and dubbed it “The Greatest Show on Dirt.” At that time, Vason, who passed in 2015, had no idea that the rodeo would still be in existence, celebrating its 38th anniversary this year.

Under the direction of Vason’s wife, Valeria Howard-Cunningham, the BPIR has blossomed into an event that educates, inspires, and unites, bringing family joy to sell-out crowds in communities across America. The BPIR experience teaches kids and adults about the important contributions of Black Americans in the development of the West.

The BPIR marked a recent milestone in partnering with PBR (Professional Bull Riders), pairing the rodeo with an elite series bull riding that was carried on network television on June 19, 2021 – Juneteenth – becoming the first Black rodeo ever to be broadcast on network TV.

“The Bill Pickett Invitational Rodeo has created so many wonderful memories over the past 38 years, and when Toyota decided they wanted to share and tell the stories through a traveling museum, I was overwhelmed and filled with great excitement,” said Valeria Howard Cunningham, President, BPIR. “I am so excited to have the opportunity to share memories from the Black Pioneers in the West, who Bill Pickett was, the vision of Lu Vason for BPIR, and the many faces of BPIR.”

“Toyota celebrates the Bill Pickett Invitational Rodeo for its contributions to highlighting the history of African Americans in the West and ensuring the true diversity of American Western culture. The BPIR exposes, introduces and makes the African-American cowboy culture visible for all Americans, which we are happy to embrace,” said Alva Adams-Mason, Executive Group Manager – Multicultural Business Alliance and Strategy, Toyota.

“Through the continued efforts of authors and historians like myself and Art T. Burton and now curators like those responsible for this traveling museum, the history of Black cowboys and cowgirls will no longer remain nameless, faceless, or without color,” said Keith Ryan Cartwright, author of Black Cowboys of Rodeo: Unsung Heroes from Harlem to Hollywood and the American West. “There is a palpable excitement surrounding the opportunity to revisit the Bill Pickett Invitational Rodeo’s legacy of nearly four decades as the most significant nationally touring Black rodeo.”

The Toyota Texas Connection Tour presented by Ariat and Crown Royal visits Cowtown Coliseum, the iconic site of the first indoor rodeo in 1918 and a venue Bill Pickett made famous (his statue is found outside) in 1905, with performances on Friday, May 13 at 7:00 p.m. and Saturday, May 14 at 1:30 p.m. and 7:00 p.m. Tickets can be purchased at https://www.etix.com/ticket/e/1024520/bill-pickett-fort-worth-cowtown-coliseum

In 1977, during Wyoming’s Cheyenne Frontier Days, Lu Vason’s interest turned toward rodeo after his curiosity was aroused when he noted the absence of Black cowboys and cowgirls participating that day. Over the next couple of years, Vason, a leader in the entertainment community, did his research and found thousands of Black Cowboys and Cowgirls across the country lacking the opportunity to showcase their talents. Vason was convinced that the time had come to uncover the cultural past of the Black Cowboy. In 1984, he created an all-Black rodeo association named after the legendary Black cowboy, Bill Pickett, who originated the rodeo event called “bulldogging’.

After Vason’s passing in 2015, his wife, Valeria Howard-Cunningham, began working to keep the legacy alive. Howard-Cunningham felt the rodeo had a rich history, legacy, and a huge importance to the community. She is deeply passionate about BPIR, works hard to create and enhance the organization’s vision and created a detailed strategic direction for BPIR. Key to this vision is the belief that promoting a first-class African American rodeo tour remains critical to Black Cowboys/Cowgirls and their communities.

“More than ever, it’s important for all of us to set examples, create visions and provide opportunities for kids and young adults to understand the history as well as the purpose of BPIR, and create new history,” Howard-Cunningham said. Fueled by these principles, the Bill Pickett Invitation Rodeo is entering its 38th year of educating, entertaining and connecting communities across the US as the “Greatest Show on Dirt”.