DESOTO — They offered her 30 years, but she pled not guilty. DeSoto resident Sharon Hennington-Taylor’s defense attorney told the court they would proceed with the trial.

The trial began Thursday, later than the time scheduled while those in the court room waited for three late jurors. Once the proceedings began however, the opening remarks went quick and four witnesses were called before lunchtime.

It has been more than a year since the Hennington-Taylor admittedly shot and killed her husbandon April 30, 2017. Donald Ray Taylor, 58, succumbed to a single gunshot wound to the head.

The woman’s words were clear to the 9-1-1 dispatchers at the Southwest Regional Communications Center (SWRCC).

“I just shot my husband.”

Assistant District Attorney Marissa Hatchett played the 9-1-1 call at the trial Thursday morning along with offering jurors a look at over 90 crime scene photographs that had been taken by a detective from the Dallas County Sheriff physical evidence department.

Hatchett is a member of the Family Violence Division of the Dallas County District Attorney’s office.

Third And Final DeSoto Murder Of 2017

According to the arrest affidavit, Hennington-Taylor told detectives that she had been gone all day. During that time the victim repeatedly called her, and they argued. Hennington-Taylor went on to tell investigators that once she arrived home she found someone in her parking spot. Feeling angry, she decided to go get herself something to eat.

Afterwards she returned home where Mr. Taylor sparked another argument, because Hennington-Taylor did not bring him home anything to eat. The verbal altercation soon turned physical as Mr. Taylor dragged the suspect off the couch and attempted to physically assault her.

Hennington-Taylor says that she blocked his attempts and grabbed his shirt and ripped it. During the scuffle, she escaped into the kitchen where she retrieved a handgun that was hidden among the pots and pans.

When Hennington-Taylor re-entered the foyer space she recalled telling the victim, “You are not going to hit me.” After which the couple reportedly argued for 3-4 more minutes before she raised her hand and shot the victim a single time in the head.

Reports say that Hennington-Taylor had been the victim of years of domestic abuse. it is unclear if that fact will have any impact on the trial.

Opening remarks by Hatchett reinforced the fact that, “Donald Ray Taylor is no longer with us.” Adding that his grandchildren will never get to see him. Painting the picture of a good man, the prosecution team did admit that there had been family violence in the past. Reports say police had previously been called to the residence, but no charges were ever brought forth.

The salient points of Hatchett’s argument came down to if he was causing her pain she had the right to defend herself. However, she did not have the right to kill him.

“Was she justified in using deadly force?” The prosecutor asked. “…. she is guilty of murder.”

Presenting Hennington-Taylor’s side was Attorney Mark Watson. His opening remarks were simple, “This case is not complicated or complex.”

Hennington-Taylor’s defense team said she was an abused woman and the deceased was a violent man.

“I question why this case was ever filed,” Watson continued. “Self defense folks, that’s all it is. It’s a simple not guilty.”

While the first three witnesses came and went quickly. Taylor’s daughter from his first marriage, Devonna Jones, described her father as ‘joyful and [someone that] never met a stranger.’

A darker turn came when the defense pulled out a lead pipe, that Taylor in the past referred to his ‘licking stick’. Watson reminded Jones that her father had used it on a man named Gus Thomas, her sister’s significant other.

It was alleged he used it on Thomas because the man had been abusing Taylor’s daughter.

There was also an incident on the defendant’s social media account. Where her husband wrote some threatening and violent words on his wife’s Facebook wall, under a photo of Hennington-Taylor hugging a relative.

“This is mine,” he said referring to his wife adding, “bitch ass fucker, I can make consequences happen.”

The state then called a friend of the deceased who was possibly the last person to see him the day he was killed. The witness, Nathaniel Harris said he had been in the back driveway with Taylor that day and never went inside the house. He did mention Hennington-Taylor arrived in the back of the house but seeing him in her spot, chose an alternate location instead.

Officer Casey Harlem of the DeSoto Police Department was called next. According to reports she was the first officer at the scene. However her body camera was not working that night and she was not the officer who took Hennington-Taylor into custody.

Harlem did reference there was a cell phone in the kitchen she saw go off with a message that read, “I shot Don.”

But the defense was adamant about asking Harlem if the message said, “I shot Don” or “I shot Don I need help.

There was another discrepancy that was not pointed out by lunchtime the first day of the trial. Hennington-Jones used the house phone to call 9-1-1 and had alluded to the fact her cell phone was not working. She said it had been only minutes between the time she called police and when she shot her husband.

She did take the house phone with her outside when she came out to meet police with her hands in plain sight. However, there was no explanation as to if the cell phone wasn’t operable — why did the text message go through after police arrived.

The fourth witness – the one questioned the most in the morning session of the trial – was a detective from the Dallas County Sheriff’s physical evidence department. The prosecutor went over almost 100 photos with the man. While on the witness stand they discussed  why he took the photos he took, what was in the photos exactly. Additionally, why he seized the evidence he did.

The gun located on the kitchen counter, was a nine-shot JC Higgins 22 caliber revolver. The defense later pointed out and wondered why the camera and testosterone pills on the that same counter were not seized as evidence. There was also a camera in the bedroom and additional testosterone pills in the master bathroom.

There was also a mop that was seized, but not the bucket of water next to the mop. The mop was never tested.

Other notable mentions of items seized included two pink slippers that were under the deceased body in the photos the prosecutors showed of Taylor with a bullet through his forhead. Glasses on the floor nearby was also taken in as evidence after being cleared from the scene. Watson was persistent about pointing out facts from the photos that the state had ignored, but that could be pertinent to the verdict.

After Hennington-Taylor’s arrest she was held on $250,000 bond. On May 1, 2017 she was transferred to Dallas County Lew Sterrett Justice Center. Upon arrival she declined a court appointed attorney.

The following day she changed her mind and Judge Hawthorne appointed Attorney Mark Watson as counsel.

By May 8, her bond was dramatically reduced to $50,000 cash or surety bond. Watson made that case that her thirty years of as a Network Specialist for AT&T made her unable to make such a high bond amount. This fact coupled with the absence of a prior criminal record deemed her a negligible flight risk.

Since then Hennington-Taylor was ordered to wear a monitoring device and forfeit her passport. She was observing a 7:00 p.m. nightly curfew and was allowed to attend church services with her brother on Sundays.

It is unknown how long the murder trial will take, but to date the state prosecutor has lined up 49, police officers, Dallas and Ellis County medical examiners, fire arm experts and character witnesses. 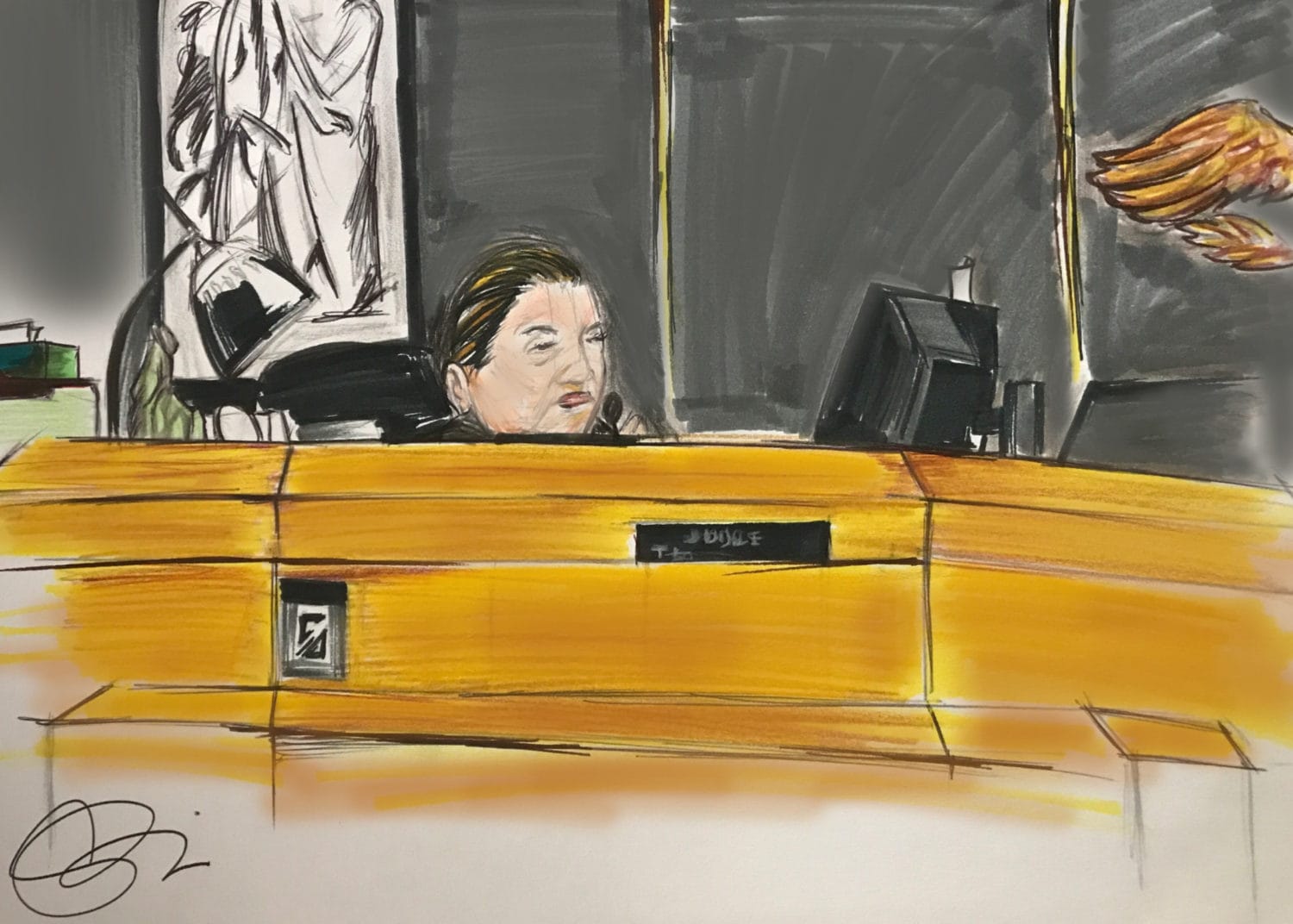