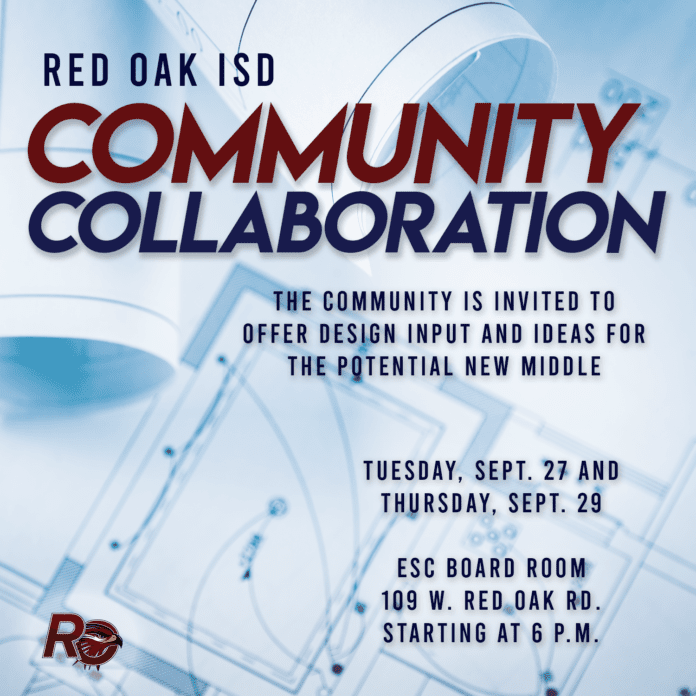 (RED OAK, TX) — Red Oak ISD continues the pre-design phase of creating a second District middle school by hosting several design input events, including two for the community.
“We are hosting smaller gatherings to hear from our constituents about the preferred design elements on multiple parts of the school,” stated Superintendent Brenda Sanford.

“Our parent meetings wrap up this week then we meet with the Red Oak ISD Community Advisory Council and host two Community Collaboration events on September 27 and 29. We hope the community will join us and be an active part of the process in person.”

“We are holding elementary campus events, since these are the parents and children who will be the first in the school when it opens in August 2025,” added Mrs. Sanford about the intentional elementary parent meetings. “We also met with staff regarding programming needs and our Student Advisory Council at the high school to get their opinions.”
Those unable to attend may submit their input by email at info@redoakisd.org.

The facility will hold 1,200 students in 180,000 square feet with the traditional elements of a middle school – safety including cameras, core and specialized classrooms including career technical education programs, fine arts, athletics, cafetorium, and library spaces, plus all the support entities such as administration, counseling, support staff, clinic, and storage.

Following the design input phase, Corgan architects will begin to fit all the pieces together – from academic space to extra-curricular, collaborative learning to community gatherings – the school will be designed with elements both needed and preferred by the District and community.

“In October, we will be asking the community to join us again for two nights of Rendering Reviews on Wednesday, October 12, and Thursday, October 13 from 6-7 p.m., along with a driveby bus tour of the site,” added Superintendent Sanford. “Those wishing to see the site should meet at the school by 5:15 p.m. for the site tour or they are welcome to drive by on their own.” 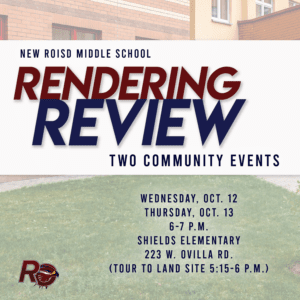 The land is located between 422-498 Westmoreland Rd. in Ovilla.

On August 3, the Board approved the pre-design process of the facility after input from the failed May bond suggested the community wished to see what they were voting on. The Bond was called on August 18 by unanimous vote. Pending voter approval of the $94 million capital project on November 8, the school would be built on land already owned by the District south of Ovilla Rd. on the east side of Westmoreland Rd. in Ovilla and is projected to be open by August 2025.

The school would alleviate overcrowding at the current middle school by splitting the approximately 1,550 students in grades 6-8 into the two 1,200-capacity schools (approx. 775 in each). Demographic studies show that ROISD is growing by 50-60 students per year in grades 6-8, meaning the projected enrollment would be between 1,700 and 1,750 by 2025; leaving growth in the two schools at 650 students. The new school will also have potential growth for additions if later needed.