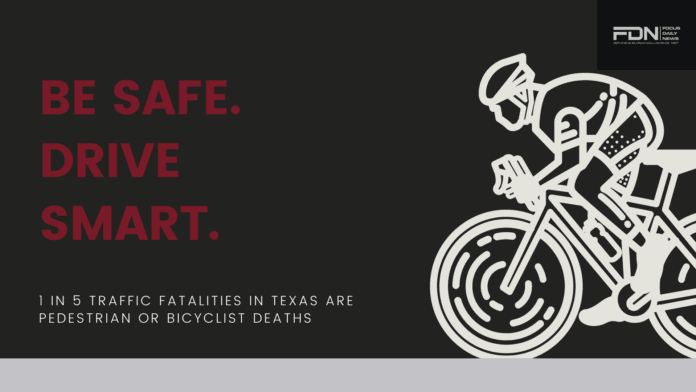 1 in 5 Traffic Fatalities In TX Are Pedestrian, Bicycle Deaths

AUSTIN – Despite a decrease in traffic crashes in 2020, Texas saw a dramatic rise in the number of people killed walking and biking on our roadways. Last year, 731 people died in pedestrian-related crashes, an increase of 9% from 2019. Crashes involving bicyclists claimed the lives of 82 people, up from 68 deaths the previous year. During 2020, 25% of fatalities in pedestrian and bicyclist-related crashes involved alcohol. These numbers reflect an alarming trend of pedestrian and bicyclist fatalities increasing over the last five years.

Pedestrian and bicyclist deaths account for one in five of all traffic fatalities in the state. Safety officials attribute this growing concern to people’s widespread failure to follow state laws designed to protect pedestrians and bicyclists. To that end, the Texas Department of Transportation is kicking off a public awareness campaign this month that urges all Texans to walk smart, bike smart and drive smart.

“More than 800 people lost their lives last year in pedestrian and bicycle-related crashes on Texas roads. One death is too many,” said TxDOT Executive Director Marc Williams. “Whether you’re behind the wheel, on foot or riding a bicycle, we’re reminding all Texans that they need to be safe and smart, and that starts with obeying traffic laws.”

TxDOT urges drivers, pedestrians and bicyclists to protect one another by following state traffic laws

As Texans travel to their destinations, TxDOT wants them to know the laws for safe walking, biking and driving—and to follow them. Drivers are required to take specific steps to protect pedestrians and bicyclists, who are more likely to be killed or seriously injured when involved in a crash with a motor vehicle. State laws mandate stopping for pedestrians in crosswalks, yielding the right of way to pedestrians and bicyclists when turning, and passing bicyclists at a safe distance and giving them room to ride.

Like drivers, bicyclists are required to obey all traffic signs and signals, this includes stopping at red lights and stop signs. State laws also dictate that those who ride bicycles must use hand signals when turning or stopping, ride with traffic, use bike lanes or ride as near as possible to the right-hand curb, and when riding at night, make sure their bikes have a white light on the front and a red light or reflector on the back.

Pedestrians must cross the street only at intersections and crosswalks, obey all traffic and crosswalk signals and always use sidewalks. If there isn’t a sidewalk, pedestrians should walk on the left side of the street or road, facing oncoming traffic.

Ads Remind Texans How To Prevent Pedestrian and Bicyclist Fatalities

Drivers, pedestrians and bicyclists can expect to see these safety reminders on TV, billboards, gas pumps, buses and social media, as TxDOT reminds Texans to do their part to prevent pedestrian and bicyclist fatalities.

Between 2015 and 2021, TxDOT awarded more than $300 million in federal and state funding to support locally-sponsored projects providing safe routes to schools, multiuse paths, sidewalks and bikeways in rural and small urban areas and to upgrade sidewalks, curb ramps and striping for pedestrian accessibility, safety, and mobility.

TxDOT’s “Be Safe. Drive Smart.” campaign and pedestrian and bicycle safety initiative are key components of #EndTheStreakTX, a broader social media and word-of-mouth effort that encourages drivers to make safer choices while behind the wheel such as wearing a seat belt, driving the speed limit, never texting and driving and never driving under the influence of alcohol or other drugs. Nov. 7, 2000 was the last deathless day on Texas roadways. #EndTheStreakTX asks all Texans to commit to driving safely to help end the streak of daily deaths.