Home Entertainment Pat Green To Perform At The Rustic On St. Pat’s Day 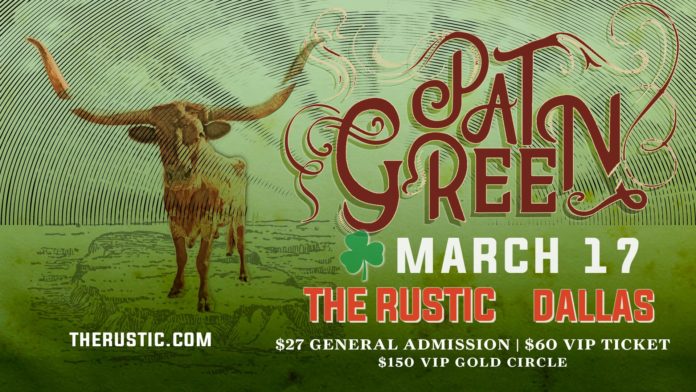 DALLAS– The luck is strong in Dallas for country music fans. Country music star Pat Green is coming to The Rustic to help celebrate St. Pat’s Day with a rousing performance at the restaurant, bar and entertainment venue that he helped put on the map.

On St. Pat’s Day, March 17, fans are invited to wear their favorite green threads and celebrate the holiday the best way possible. Come to The Rustic to enjoy an unforgettable performance by country artist Pat Green.

“St. Patrick’s Day is one of my favorite holidays, and there’s no place I’d rather be than at The Rustic,” said Green, partner of the popular venue. “Country music under the big Texas sky combined with the luckiest day of the year … it doesn’t get much better than that.”

After rising through Texas’ dancehall scene years ago, Green earned himself major label support in Nashville and became the poster child of Texas music for a whole generation of fans. Named “the Springsteen of the Southwest” in People magazine, Green’s explosive live shows have made him a fan favorite and a hot ticket, selling out venues from the Houston Astrodome to the Nokia Theater in Times Square. The San Antonio native has sold over two million albums. In addition, he’s been nominated for three Grammy Awards.

Now, after a three-year recharge, Green is back in his comfort zone and playing by his own rules again. His new independent album Home is his first set of originals in several years. It speaks directly to the hardcore fans that have been with him since the beginning.

With its casual atmosphere, live musical acts and unique, full-service dining experience featuring farm-fresh, homestyle dishes and a Texas-sized selection of wines, spirits and 40 beers on tap, The Rustic has carved a distinctive niche among Dallas, San Antonio and Houston restaurants. The concept is the brainchild of Noonan, Josh Sepkowitz and Texas country artist Pat Green. Their love of the outdoors and live music brought The Rustic to life. The result is a fun and relaxing dining and concert experience from a phenomenal patio, all under the big Texas sky.

The Rustic is located at 3656 Howell Street in Dallas.