CEDAR HILL—More details have come to light in the February harrowing house fire that lead to the death of four.

Now, one of those deaths may be ruled a suicide. The death of beloved Seagoville Pastor Eugene Keahey was caused by a gunshot to the head.

Last week officials from the Dallas County Medical Examiner’s office notified Cedar Hill police of the official causes of death for three of the Keahey family, which have all been upgraded to homicides.

Fifteen year old Camryn Keahey died that same day as the result of thermal burns and smoke inhalation. Their oldest daughter Darryn Keahey, 17, was still alive when first responders made it to the scene. She was transported to a local hospital. However, on April 1, she succumbed due to complications of thermal burns.

The Medical Examiner has yet to determine a cause of death for wife DeAnna Keahey.

While it does appear that the blaze was set intentionally; the Cedar Hill Fire Department and the State Fire Marshal have not yet determined the cause of the fire. Investigators are waiting on laboratory results from samples that were submitted to the Texas Department of Public Safety laboratory.

“The late Pastor Eugene Keahey was my Brother and my friend. He was a great man and a trusted brother,” said fellow Pastor and Civil Rights Advocate Kyev Tatum. “In the past few days, I’ve had to come to grips with the fact that several of my dearest brothers have lost their battles with depression and covered up mental illness.”

Pastor Keahey was recently most known for his tireless efforts in Sandbranch, Texas. The community lies in an unincorporated area of South Dallas County between Wilmer and Seagoville.

The community that is home to an estimated 400 largely elderly African American population, who has only had running water since 1980. The convoluted story goes on that the community has in the past depended on well water that has since run dry or is no longer potable due to area livestock.

“Flint (MI) has brown water and Sandbranch has no water,” Keahey told The Root.com in 2016. “We have kids with no water. We’re like a Third World country, and I don’t say that loosely.”

FEMA and Dallas County officials offered to relocate the community that is within eyesight of the Southern Dallas Wastewater Treatment Plant. However, reports say some residents got as little as $350 to move. Mount Zion Baptist Church has long since been the center point of the community and Pastor Keahey its point person.

Since 2014, Project DreamHaus, a nonprofit organization founded in 2001 by the Rev. Eugene and Deanna Keahey with a mission to “help the underserved become self-sufficient through education, economic awareness and strong community development,” has been pivotal in helping the residents of Sandbranch maintain a decent quality of life.

However, since his death, a person to carry on this fight has not been identified. 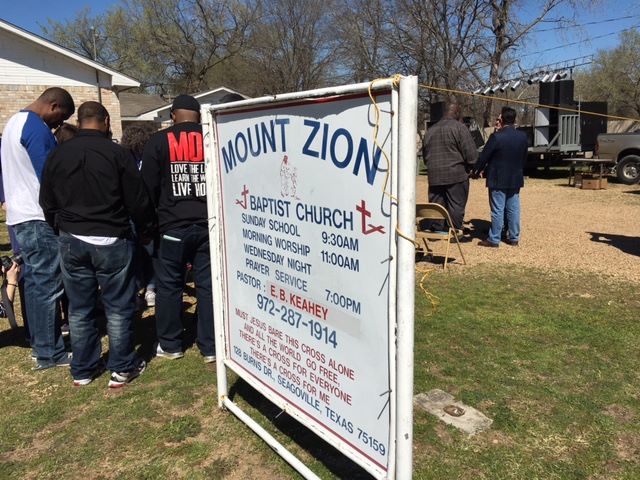