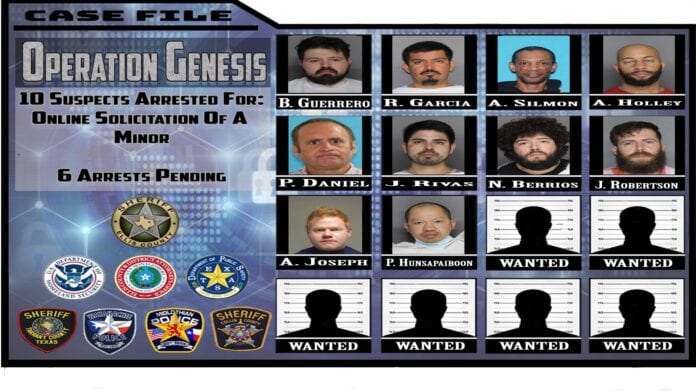 “Don’t Come To Ellis County And Target Our Children”

This operation targeted Online Solicitation of Minors. It was called Operation Genesis because it was a first of its kind in Ellis County. The Operation included nine federal, state and local agencies working together. As Sheriff Norman stated in the press conference, “We will actively pursue those who target our children.”

During the Investigation a total of 17 felony cases will be filed with the Ellis County District Attorney’s Office against 16 suspects. Furthermore, ten individuals have been arrested and the remaining 6 are being actively pursued. One of the predators is facing two counts for online solicitation of a minor (a 2nd degree felony). The charges carry a punishment of two to 20 years in the state of Texas. Two of the suspects reside in Ellis County the other individuals are from across the Metroplex.

Names of the six that haven’t been arrested, names will not be released until the suspects are in custody. Sheriff Norman said they expect to have them within the next few days. He said the majority of the suspects were targeting young ladies, most were 13-14 year old females. He emphasizes the need for parents to monitor who their children are talking to and how they are using their online devices.