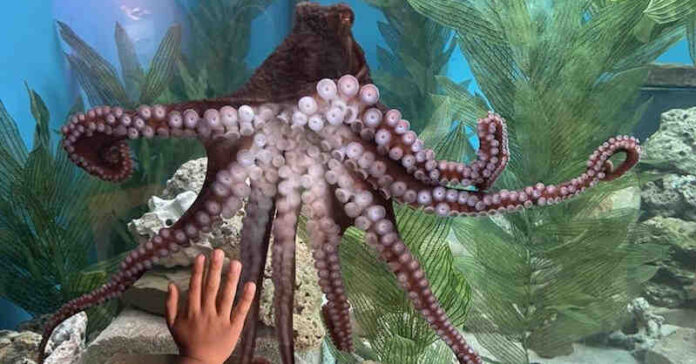 The Children’s Aquarium Dallas at Fair Park has a new resident.

The young 15-pound Octopus is a female and has an arm span of approximately two feet. It will grow to have a span of up to 10 feet during its life.

Giant Pacific Octopuses are intelligent and active. They have eight arms and each arm is covered with two rows of suction cups used to smell, taste and grip their food. They are solitary animals preferring to live their lives without other octopuses. GPOs can change the color of their skin to blend in to their environment. Because of their intelligence GPOs are given a variety of enrichment opportunities including games and puzzles. They are the largest species of Octopus.

An Octopus naming poll will be hosted on the Aquarium’s Instagram and Facebook pages beginning Thursday, July 21 @childrensaquarium.

The Children’s Aquarium Dallas in Fair Park is located at 1462 1st Ave., Dallas, TX 75210. The Aquarium is open from 9 a.m. until 5 p.m., daily. The affordable attraction is free for children ages two and under, $9.95 for kids ages 3 to 12 and $13.95 for anyone 13 and over. Known for its hands-on, hands-wet and high-tech activities the Aquarium offers families a chance to pet and feed friendly Stingrays, get nibbled by Doctor Fish, feed the spitting Archer Fish and interact with a variety of ambassador animals.

Exhibits include sharks, fish, rays, reptiles and many other species from the oceans, lakes and rivers of the world. Parking is free directly in front of the Aquarium. Enter Fair Park from Gate 6 and drive to the Aquarium.