CEDAR HILL—His swearing in was on April Fool’s Day. There was no tomfoolery to be had as the standing room only crowd watched incoming Cedar Hill Police Chief Ely Reyes take the oath of office at the Cedar Hill Government Center.

Rising to the rank of Assistant Police Chief in 2016, Reyes comes to Cedar Hill with more than 22 years of service in the Austin Police Department.

Mayor Rob Franke spoke first officially welcoming Reyes and highlighting what a momentous occasion it bodes for the city.

“I am incredibly honored to be part of the city at this time,” Franke said. Talking of inevitable change in the city, Franke notes Reyes was the man for the position to move the police department forward.

Prior to his role as Assistant Chief, Reyes was innovative as the Commander of the Austin PD Technology Unit. Last year the department garnered a number of headlines regarded fully equipping more than 1,000 officers with body cams. Prior to that the department was one of the first major departments in Texas to use drones to identify and analyze traffic collisions.

“The decision to hire Chief Reyes was not mine,” Franke said. “However, I did sit in on the interviews.”

Impressing the hiring committee there was no question as to why Reyes would leave Austin for Cedar Hill.

Thoughts bandied around him being, ‘someone with the vision to take Cedar Hill to the next level.’ Other considerations surround Reyes’ “peacemaking [ability] even when dealing with conflict.”

City Manager Greg Porter spoke during the ceremony as well. He concurs with the fact that Cedar Hill is the kind of city that comes together for milestones.

“There is a lot of stars and firepower in the room,” Porter adds. In fact, there were a variety of police chiefs from other cities in attendance, one from as far away as Houston.

“Reyes is someone who has heard the call of serving all his life, “Porter said. “He’s done just about everything in law enforcement you can do. He comes here now as a dedicated family man.”

When it was Reyes’ turn, he introduced his wife, son and daughter. He spoke of strength of commitment and how he saw relationships driving each other in the city.

“From the first time I visited Cedar Hill I saw how close knit the community was.”

His style of policing as he spoke to the crowd seemed to point to community policing.

“Every time you interact with the community that is an opportunity, and it might be the only time to build that relationship,” Reyes said.

Reyes choked up only once during the ceremony when he paid honor to the man who mentored him, his uncle Johnny.

“Johnny is the reason I became a police officer and served in the Army,” he told the crowd.

One only had to see his sincerity for a moment to realize that Johnny would be proud. And the city of Cedar Hill certainly will be proud too as Reyes moves the department into the future.

Reyes was chosen from over 100 applicants vying for the Police Chief position. He will be the seventh Chief for the Cedar Hill Police Department since its formation in 1974. 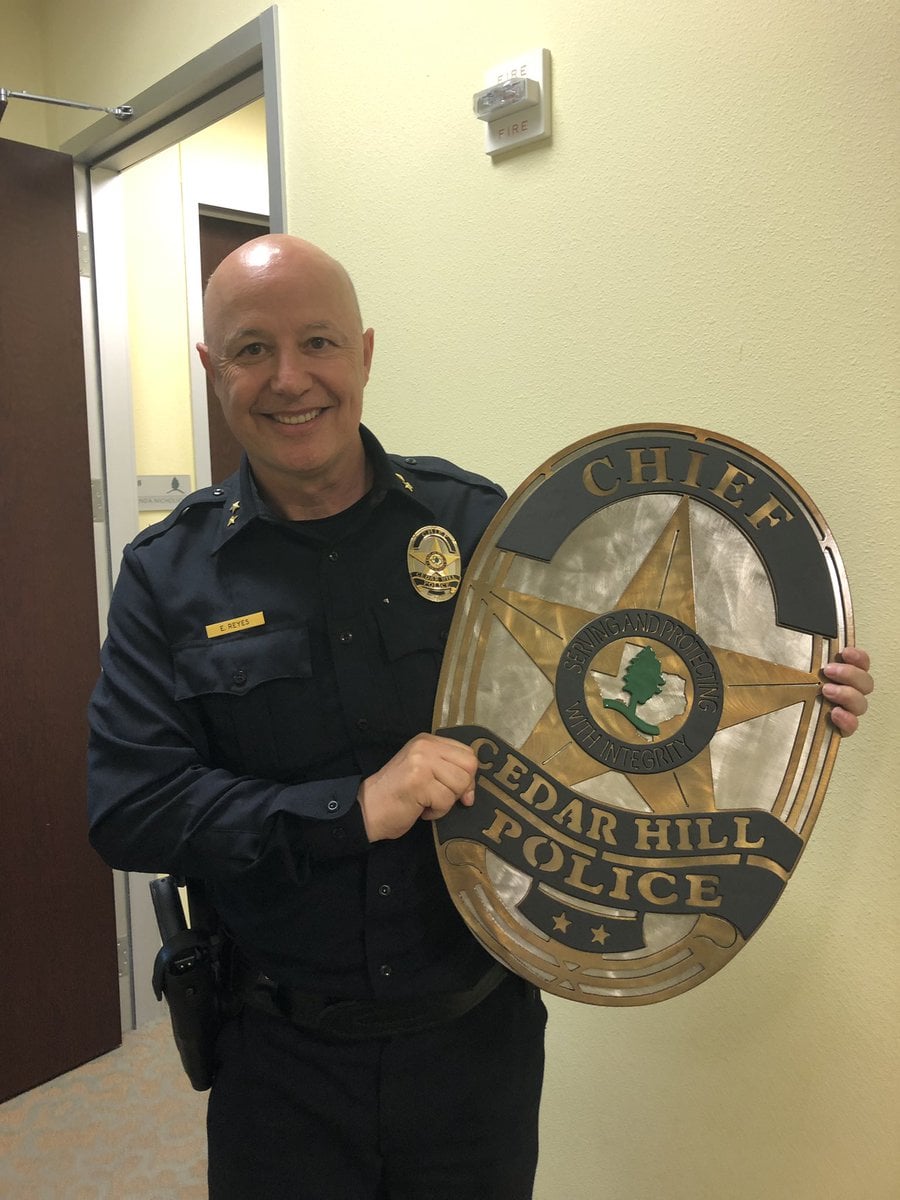