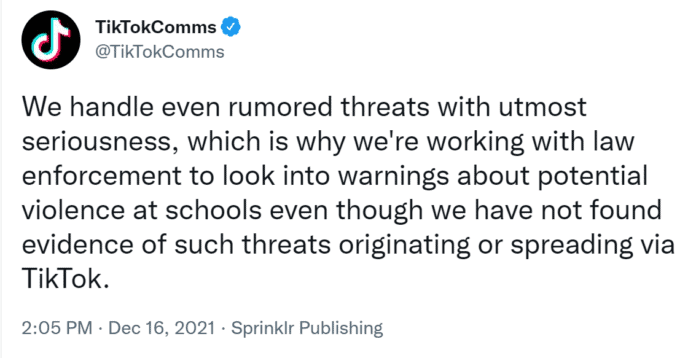 TikTok is at the center of chaos once again across the country as authorities and school administrators are on alert. Students and authorities are talking about a National TikTok challenge which suggests numerous school shootings will take place tomorrow, December 17.

In Mansfield ISD, a text went out to parents of students enrolled in middle and high schools notifying them “no backpacks or other school bags will be allowed on any middle or high school campus tomorrow. Students will be allowed to bring lunchboxes and/or small purses to carry personal items. Additionally, students are allowed to bring Chromebooks, cell phones, or other items needed for their semester exams.” 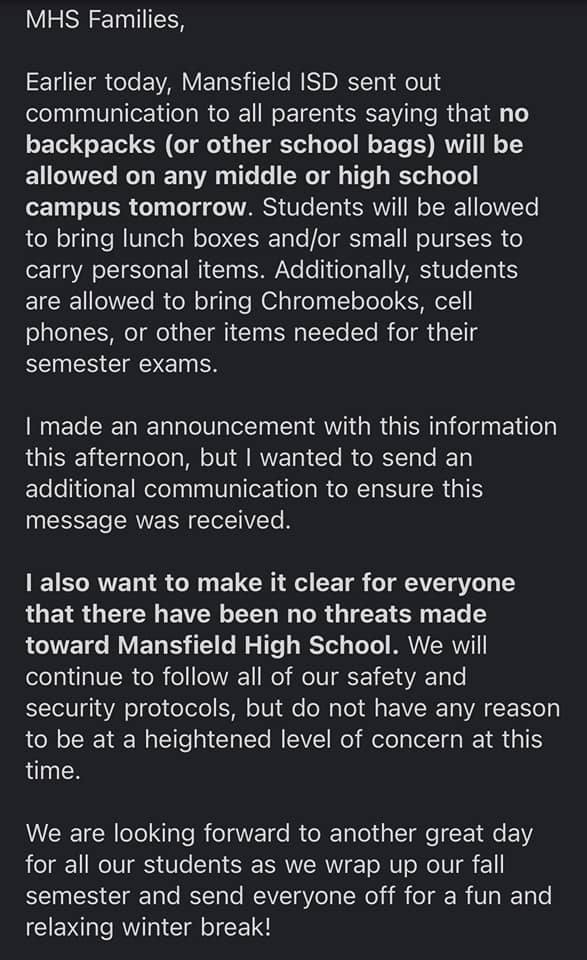 The message clarified that Mansfield High School has not received any threats and there was no reason for a heightened concern at this time. However, some parents expressed concern about the National TikTok challenge and the rumors their students are repeating. Several of those have decided to keep their children home tomorrow to lower their student’s stress level.

Mansfield ISD continued by stating, “This layer of protection is in addition to the heightened physical security measures the district
implemented in early October, which include:

• The Mansfield ISD Police Department partnering with neighboring agencies to ensure
that more law enforcement is available at our campuses.

• A designated district-level staff member who is fully trained in safety and security
assisting campuses with monitoring high-traffic and common areas in real time through
our video surveillance systems.

• The district is continuing random metal detector wand checks at our secondary
campuses for weapons and other unauthorized objects.

Mansfield ISD and local law enforcement agencies take all threats that are made against our students and staff members very seriously. We want to make it clear that Mansfield ISD will not tolerate this type of behavior at all. Please talk with your child about the dangers of making any threats, even if they are doing it as a joke.

MISD is committed to maintaining a learning environment that is safe and productive and
supports criminal prosecution of any individual who threatens harm to our students, staff and campuses. Any person involved in making threats that break the law or go against MISD’s Student Code of Conduct will face the necessary consequences.

TikTok issued this statement on social media addressing concerns regarding the reports of a national threat on their platform: “We handle even rumored threats with utmost seriousness, which is why we’re working with law enforcement to look into warnings about potential violence at schools even though we have not found evidence of such threats originating or spreading via TikTok,” the company wrote.

We handle even rumored threats with utmost seriousness, which is why we’re working with law enforcement to look into warnings about potential violence at schools even though we have not found evidence of such threats originating or spreading via TikTok.

This afternoon, Ferris ISD had a brief scare when a fire alarm was pulled at Ferris Junior High’s campus. The campus went into lockdown and cleared the building, the student involved was taken into custody without incident.

“It’s always a difficult decision to close a campus, but the safety and security of students and staff is Frisco ISD’s foremost concern,” said Frisco ISD Director of Communications Jamie Driskill.

With an increase in threats across the country, Superintendents and Law Enforcement officials are urging parents to talk with their children and monitor their social media usage.