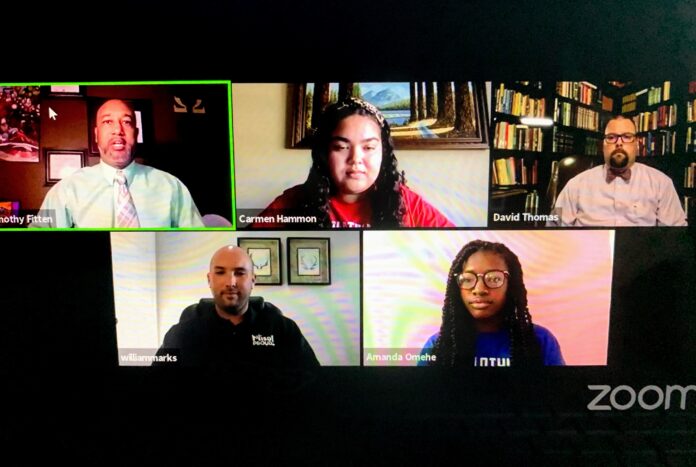 Candidates And Conversations With Will Marks & David Thomas

MIDLOTHIAN – Midlothians for Change hosted a MISD Place 6 candidate forum online Wednesday night. Two of the three candidates running for that seat were in attendance. While around 50+ people tuned in live, the video currently has about 1,000 views.

Place 6 challengers William Marks and David Thomas were part of the virtual “Candidates and Conversations” meeting while incumbent Tami Tobey declined an invitation to attend.

Hosted by Timothy Fitten, the evening started with questions asked by two moderators: Carmen Hammon and Amanda Omehe. Both ladies are high school students in Midlothian. Carmen is a rising senior at Heritage High school, involved in National Honor Society, student council, and is a student athletic trainer. She practices “citizenship in action” and was a co-organizer of a recent protest “Minorities are the Priority.”

Amanda is a rising senior at Midlothian High School. She’s going into her third year on the varsity girls soccer team, involved in NHS, VP of Student Council and is enrolled in multiple AP courses.

Fitten noted at the beginning of the meeting the Midlothian for Change event was the “first online Midlothian Candidates forum” to ever be held in the city.

David Thomas opened with comments about his time working for the district – he worked in the transportation department and explained he had also taught coaches how to drive the Midlothian buses.

He said he brings to the table a “unique perspective” for the ISD in that he was an employee for six years with the district.

Throughout the evening he continued to emphasize the importance of working with the superintendent and the teachers. Thomas pointed out he has been to 90% of the school board meetings over the past six years.

Marks opened his comments with the fact that he was excited about the forum and he loves Midlothian. He is a third-generation resident of the city and he said he is glad to get to “show my heart for the community.”

He said he embraces growth and realizes it is hard. Marks added he is also looking at a “town with no division” but instead celebrates unity.

Candidates Answer What Does It Mean To Be MISD Proud?

Questions were asked about being proud of Midlothian ISD and what these men would like their legacy to be. However, the real probing came from those watching the forum and wanting the hard issues to be addressed.

For example, the question of addressing diversity in the school district.

Thomas said he has been doing a lot of reading lately about diversity. He’s also having conversations with people about what diversity means to them.

“To listen and change my thought processes,” he said.

Marks said he is aware of diversity because of a blended family. He added that while he sees people as they are, a person still never knows what another person is going through.

“Be an advocate of love,” he explained. While Marks said that might not be measurable, it is still tangible.

Thomas also added he believes it is important to foster and create an environment where students are set up for success.

As for returning to school in the upcoming school year, Thomas reminded not every student can learn online. He believes the teachers must be comfortable too though.

After almost two hours, the forum ended with closing statements from both candidates.
Thomas’ desire is to serve and support the superintendent, staff, and students. The replay is available on Facebook for anyone that would like to watch the event.

Marks ended the evening saying that while he might be young, he is up for the job of school trustee.

“I want to make a difference” and he said he believes he has a unique perspective to do that now.