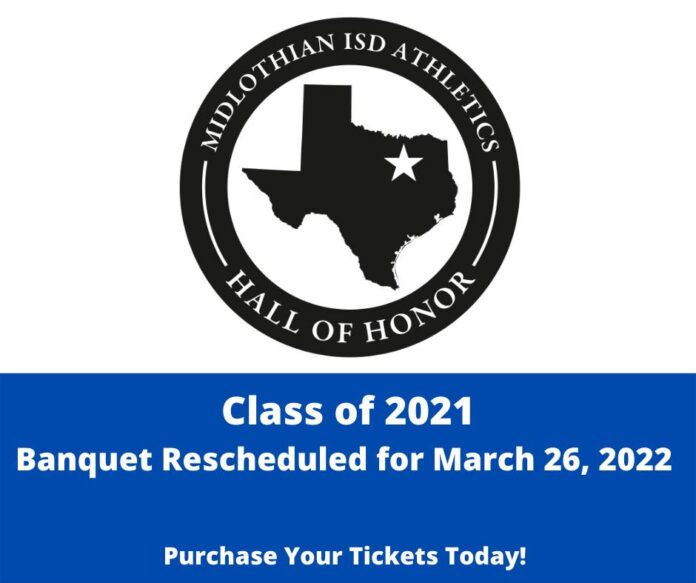 After a year’s hiatus the Midlothian ISD Athletics Hall of Honor is once again holding inducting ceremonies. The class of 2021 will be placed into the Hall on March 26 at Midlothian High School. Doors will open at 5 p.m. with dinner and awards to begin at 6.
The last time this event was held was Feb. 8, 2020 to honor the class of 2019 inductees. Because of the COVID-19 pandemic, the board of directors opted to hold off a year before returning with this year’s class of honorees.

“It is always important to look back at the people who have laid the groundwork for success,” said Midlothian Hall of Honor Board Chairman Matt McKay. “Through our relationship with Director of Athletics Todd York we also have the opportunity to have Midlothian’s current student-athletes and coaches look up to and strive to be put into the Hall of Honor as they work everyday to accomplish their goals.”

“It is important for the Hall of Honor to not only recognize individuals, teams, coaches, and supporters who have paved the way for Midlothian ISD Athletics, but to also give back to the current student-athletes,” said Kathryne Buckley-Tessem, Board Administrator for the Hall of Honor.

The Midlothian ISD Athletics Hall of Honor was established to celebrate those individuals, teams, coaches, and community supporters who have distinguished themselves through excellence in athletics, and to inspire interest and enthusiasm for athletics at Midlothian ISD.

“The Midlothian ISD Athletics Hall of Honor Board is working diligently to honor those that have made a significant impact to our sports history and community. Our sincere hope is that the Hall of Honor will be an inspiration to future generations of Midlothian ISD athletes and a place the Midlothian community shows its pride in those athletic achievements,” McKay said.

“It is important to understand the history of who has been involved in the athletic program in the past and to continue to try and embrace the small town family atmosphere that makes the Midlothian community so special.”

To date, the Hall of Honor has inducted over 230 people in the first six classes, including 21 individual athletes, six coaches, 12 teams, and five community supporters.

“After two years of being unable to host our annual community banquet, the Hall of Honor board is beyond excited to be able to come together and honor these newest outstanding inductees. We hope everyone in the community can attend the banquet and enjoy a night of Midlothian history and celebration,” said Buckley-Tessem.

Tickets for this year’s event can be purchased at midlothianhoh.com/tickets.

The future home of the Hall of Honor will open this fall after the renovations at the Midlothian ISD Stadium are complete.

Here’s a closer look at this year’s honorees:

Lexi Ball, athlete, powerlifting, Midlothian High School Class of 2011 – She will forever hold the distinction of being Midlothian’s first state champion at the 5A level after she claimed the 105-pound powerlifting title in the spring of 2011.

Joyce Curtis, athlete, track, Midlothian High School Class of 1992 – Recognized as the Midlothian High School Most Dedicated Girls Track Runner in 1990 as a sophomore after winning the UIL state championship in the 100-meter hurdles. That same year, she also competed in the 300 hurdles at the state meet. She still holds MHS school records in both the 100 and 300 hurdles.

Ryan Mentzel, athlete, football and baseball, Midlothian High School Class of 2002 – A three-year starter for the Panthers football team and further displayed his athletic talents as a three-year varsity pitcher for the baseball team.

1980-1988 Midlothian High School boys’ cross country teams – Under the direction of coach Lanny Trammell (1980-82) and coach James Smith (1983-88), they were an elite group of runners that led MHS to nine consecutive district championships and nine consecutive trips to the UIL State Meet. Their championship breakdown includes:

Austin Guest, coach/educator, Midlothian High School boys and girls soccer – Currently the Midlothian High School varsity soccer coach for the boys and girls with over 20 years coaching experience. He has over 600 high school wins as a head coach and is a 2017 Texas Association of Soccer Coaches Hall of Honor inductee. He was also previously inducted to the MISD Athletics Hall of Honor in the class of 2019 with the 2010 Lady Panthers soccer team.