Adelynn Williams is a shy six year old who is a new first grade student at Longbranch Elementary in Midlothian. We invited her mother, Lyndsey Williams, to tell our readers about the positive way Heritage HS football player Mason Taylor’s reading to Adelynn’s virtual classroom impacted her daughter.

“Adelynn is a very shy child. We joke that if she could be surgically attached to my hip, she would be. She is very slow to warm up to new experiences, and becomes very anxious and worried when placed in new situations. Even after being with me at Ingram (where Lindalyn Williams teaches) for three years, she would have a hard time some mornings going to class. Eventually, she comes out of her shell and opens up, but it takes her a while. I was nervous about her going to a new school, but I knew it would be good for her in the long run and I knew that she would eventually be fine!”

“When school started, she obviously started virtually. My mom is a teacher of 48 years, so the first week of school she went to her house to complete virtual learning since I had to go back to school. The first week, she would not ever unmute her microphone to speak in front of the class. If Mrs. Otero asked her a question she eventually became comfortable enough to show the answer with her fingers or something. When she would complete her Seesaw (app with her assignments on it) assignments, if the assignment needed a recording or a video, it was a struggle. She was so shy she didn’t want anyone to hear her voice or see her. She would eventually do it, but not without tears.”

“After the first week of school my mom had to go back to school, so Adelynn’s dad, Joshua was able to work from home and help her with her schooling. The second day he was with her, was the first Friday Mason met the class. Mason introduced himself and read a Mercer Mayer ‘Little Critter’ book to the class. My husband said he didn’t really say anything noteworthy. He didn’t mention anything about being new or shy or anything like that, but he said you could tell he was just a really good and genuine kid. At the end of the meeting, Mason told the kids that if they came to the game that night to make sure and look for number 25!”

“He took some questions and some of the not so shy students unmuted and told stories or asked questions. Adelynn did not speak up, but after the call she immediately told her dad we would be going to the game. She would not let it go until he bought the tickets. After the meeting with Mason, the counselor also read a book to the class and asked the class what their favorite breakfast food was. She called on Adelynn, and instead of cowering and not answering, Adelynn unmuted and simply said, “waffles.” That is HUGE! The amount of excitement she had when I talked to her that afternoon was evident and contagious. When her sister (four year old Everlee) and I got home from school, we ate dinner and then loaded up for the game.”

“We got to the stadium and found some seats. Adelynn immediately started looking for Mason on the field and sideline. Once we found him she did not take her eyes off of him. He didn’t play until the last quarter, and when he was in the game, she was beaming! The whole entire game she was up cheering, dancing, and yelling “Go Jags! Go Mason!” She was determined to meet him after the game, but we kept telling her that may not be possible. After the game, we hurried over to the fence where the players go into the locker room. She watched for him to come up the ramp and when her eyes saw number 25, she began screaming his name! I was shocked! She was yelling for someone she didn’t know as loud as she could in front of strangers!”

“Mason heard her and looked directly at her and smiled and waved like he knew exactly who she was. I wish I had captured the smile on her face after that. It was priceless. We waited a few more minutes hoping he’d come out of the locker room, but he didn’t so we left. When she realized she wasn’t going to get to meet him she was devastated. She cried all the way home. When we got home and in bed I was asking why she wanted to meet him so badly, she said he made her feel better about being new and that he made her excited and ready to go to school.” 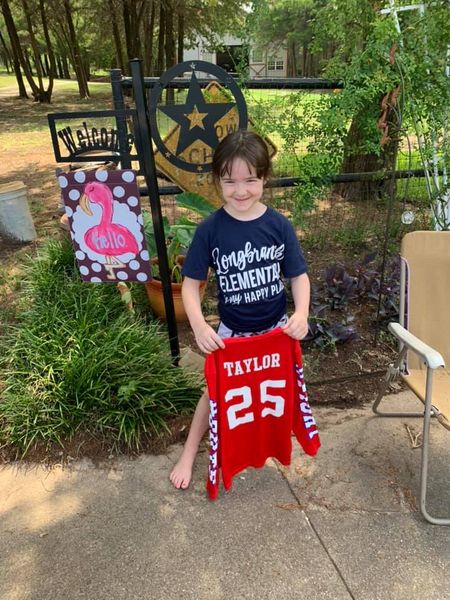 “After she fell asleep I decided to post on Facebook about her experience. At this point I didn’t know that he was the only football player assigned to her class. I assumed they would have a rotation, and I didn’t know she’d get to interact with him again, so I wanted to make sure he knew what an impact he made. I thought about myself in HS and how much I would have wanted to know if I made that type of impact in someone’s life.”

“I posted to Facebook because I wanted him to get the message. Within an hour I had several coaches wives tell me they would pass the message on. The next morning, I got a message from a friend of his parents telling me she had messaged his parents. I also got a message from his girlfriend saying she would also get the message to him. It was incredible! The response was insane. It was awesome. The whole next week, Adelynn had no problems contributing to the class discussions and recording her assignments.”

This past Friday, Mason read another book to the class and gave Adelynn a shout out beforehand. She was elated. We bought tickets to the game and went again as a family. This time, Adelynn’s grandparents and her aunt and two cousins came to the game too. About halfway through the game, I noticed a family in the front row wearing Mason’s number and realized that must be his parents. During the last quarter of the game, Adelynn and I went down to introduce ourselves. Mason’s dad looked and immediately recognized us. We had a conversation with them and it felt like they were family! They were so warm and inviting and wonderful.”

“Mason’s mom told us that this was his first year playing football and that she had always been hesitant to let him play, but this year she finally realized that maybe God had a bigger plan and reason for him to play football. She said that God could use his opportunity to play football for something bigger than himself. I got goosebumps at that moment. They then gave Adelynn some goodies. She got a fan shirt and another shirt from Mason that says ‘Longbranch is my happy place.’ They also gave her and Everlee little backpacks with goodies inside. It was so thoughtful. We parted ways and said we would see them after the game.”

“When the game was over and the players were making their way to the locker room. Adelynn took off running toward the fence at the top of the bleachers. She was determined and no one was going to stand in her way! I lost her for a minute because she was running so fast. When we got to the top she found one tiny spot in the fence and just started yelling so he could hear her. She couldn’t see him, but she was yelling! He heard her voice and came toward us and out of the fence.” 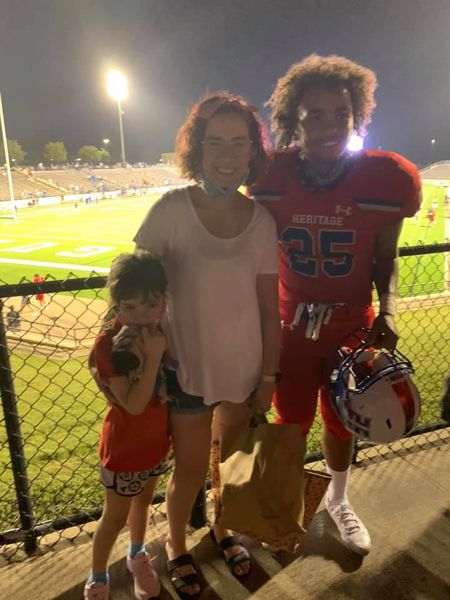 “Adelynn was immediately starstruck as if she had just met a celebrity. She was shy and still visibly shaken from her cousin’s incident, so I ended up in the picture too! She was smiling and nervous giggling the whole time. It was really a great moment for everyone. You could tell Mason was excited to meet her and see the impact he made. Adelynn cannot wait until he comes this Friday in person to the class,” said Lindsey Williams.

We NEED your support now more than ever! Support local news stories like this one by subscribing to Focus Daily News, for a limited time you can get a 1 year e-edition subscription for $10, normally $100.