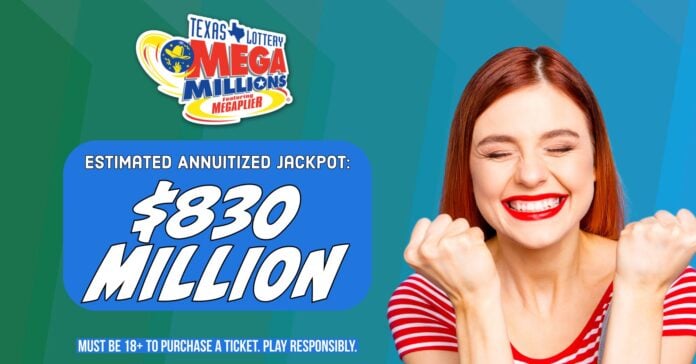 “Mega Millions sales continue to be strong for the Texas Lottery during the current jackpot run, which will generate much needed revenue for public education in the state of Texas,” said Gary Grief, executive director of the Texas Lottery. “As great excitement builds for Tuesday night’s drawing, we’re keeping our fingers crossed that the winner of this jackpot is a Texas Lottery® player. Most importantly, we also want to remind our players to play responsibly. It only takes one ticket to win.”

Tuesday’s drawing will be the 29th in the current Mega Millions jackpot run since starting as an estimated annuitized $20 million for the April 19 drawing. This is the largest Mega Millions jackpot up for grabs since the Jan. 22, 2021 drawing when it reached an estimated $1.05 billion – the game’s second-largest jackpot prize, which was won by an out of state player.

Mega Millions is played by choosing five numbers from a field of 70 and one Mega Ball number from the second field of 25 numbers. To win the Mega Millions jackpot, players must match all six numbers drawn including the Mega Ball. Players matching fewer numbers may not win the jackpot but could still walk away winners. Mega Millions currently offers a $20 million starting jackpot and a second-tier (Match 5+0) prize of $1 million. By choosing the Megaplier® feature for $1 more per Play, players can multiply their non-jackpot winnings by two, three, four or five times, winning as much as $5 million.