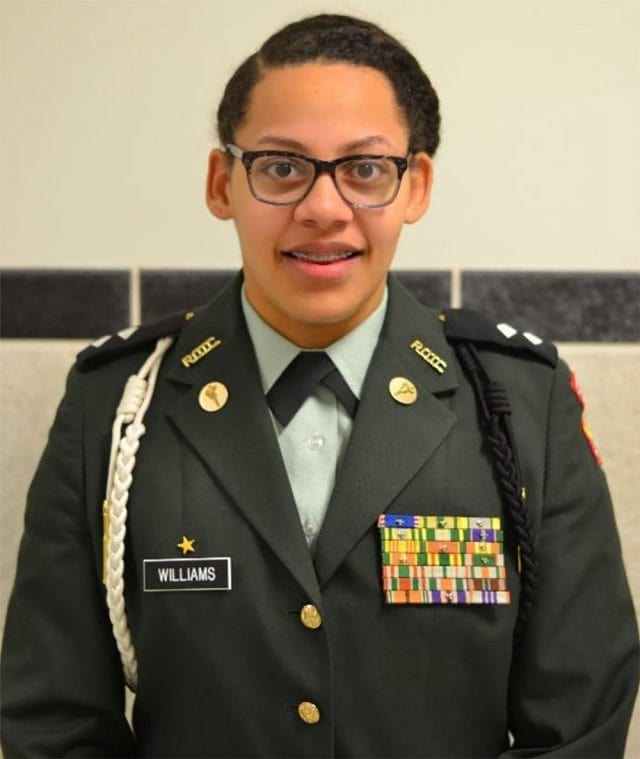 After four years of intense preparation for a military career, Lancaster High School Class of 2016 senior Renita Williams is excited to see her dream become her reality with her recent appointment to the prestigious United States Military Academy at West Point.

Williams said that when she received her letter of nomination from U.S. District #30 Representative Eddie Bernice Johnson and then her appointment from West Point, she was excited.“It was a bit of a relief and felt unreal,” she said.

The appointment allows Renita Williams to receive a first-rate Ivy-League equivalent undergraduate education, with options to pursue advanced degrees and spend a minimum of five years serving her country on active duty as a military officer. The scholarship is valued at more than $350,000 which includes tuition, room and board, medical and dental care and a monthly salary for four years.

Williams’ quest to attend West Point did not begin recently, she became committed to the desire of a military career in the eighth grade.

“I have always a felt a need to serve my country in a capacity greater than just paying taxes and being a good civilian,” Williams said. “I had to look at what I wanted to do when I grew up versus where I was at the time to see the steps that I would have to take to get there.” She began to make valuable connections in her school and community and subscribed to receive emails and letters about military events and the application process.

Williams knew that West Point wanted intelligent leaders who were physically fit and of outstanding character, strong leadership skills with excellent scores on college entrance exams. So as early as her freshman year, she began working with LHS Senior JROTC Instructor Army Major Eric Mosley and Sergeant First Class Lee Ferrell to ensure that she remained on track to meet her fitness goals.

“We started running laps every single morning and it continued all throughout freshmen year,” Renita Williams said.

Sergeant Ferrell saw her tenacity early and has helped her to stay the course.
“I was so proud when I heard the news,” he said as reflected upon her first year in the middle school junior cadet corps. “In the 7th grade, I noticed potential in her that I’d never seen in a student that young. Her commitment was unlike any other student who claimed to be interested. She did everything I asked her to do and I quickly learned that if she said was going to do something, it was done beyond my expectations.”

Over the last four years, Williams admits there were times when she felt overwhelmed, but she relied on her vision. “I had to envision myself in the position,” she said. “I kept saying can you see yourself standing at the top of Thayer Hall (a building at West Point) and can you see yourself walking across the graduation stage? If you can see it, then you are ready and you should do everything that you can to get there.”

Williams has done it.

In addition to training for a military career and being in the JROTC, she ranks number five in her class of more than 400 seniors. She enjoys volunteering and serving her community and is a member of various clubs and service organizations on her campus and in her community, including the LHS Debutantes, the Student Council, the National Society of High School Scholars, Theater Arts, and LHS Girls Wrestling Team, the Yearbook editor, High School Heroes and a student photojournalist.

Williams was also a part of the first class of freshmen who participated in the Lancaster ISD STEM for All Education Model designed to transform the learning experiences for students to successfully compete in careers focused on science, technology, engineering and math.

When asked why WestPoint, Williams simply replied, “Why not? If I want to be the best and want to say that I am one of the absolute best officers to enter into the army, then I need to be able to say that I went to the absolute best school. Getting a commission from WestPoint gives you the ability to say, without a doubt, that you are a part of a long, great line and many, many, many people have come before you and received the same training. The opportunities that it opens for me are worth it!”

Aware that things do not come easy, she is already making her next set of goals to graduate as a high-ranking class of the West Point Academy Class of 2021.

“I don’t expect them to be easy on me,” she said. “I just want to graduate high enough in rank to choose my desired field of study which is military intelligence and become a four-star general.”