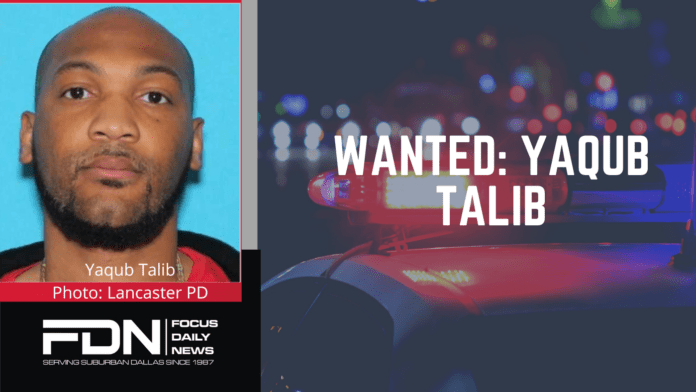 Shooting At Youth Football Game In Lancaster, Suspect At Large

The Lancaster Police Department is investigating a shooting that occurred around 8:50pm Saturday evening at the Lancaster Community Park, 1749 Jefferson Street.

Police say there was a disagreement between the coaching staff of a youth football team and the officiating crew. A fight broke out involving the opposing coaching staff. One person involved in the fight discharged a gun, striking one of the coaches.

Lancaster paramedics transported the adult male to a local hospital, but he was pronounced deceased. Coaches have identified the victim as Mike Hickmon. Hickmon was their coaching his 9 year old son’s football team.

Officers have identified the suspect involved in this incident as Yaqub Salik Talib. There is an active warrant out for his arrest.

Yaqub Salik Talib is the brother of NFL player Aqib Talib. According to TMZ Sports, Aqib was there at the time the incident occurred and his attorney gave them this statement: “”Aqib was present when this unfortunate incident occurred and is very distraught and devastated over this terrible loss of life. He would like to convey his condolences to the family of the victim and to everyone who witnessed this unfortunate tragedy.”

President of Drago Elite Academy posted this on Facebook, “As many may have already heard Michael Mike Hickmon , a father, former athlete, a coach, mentor, a pillar of our youth football community and a member of Dragon Elite Academy coaching family lost his life yesterday at a YOUTH FOOTBALL GAME. Although the older DEA teams were not in attendance at this event it still has rocked us all and really made all of us reevaluate EVERYTHING. This is something, no coach, parent or player should ever have to prepare for while participating in youth sports. We will not be playing any games today and as the president of DEA I welcome suggestions on how we can help our 9u players along with Mikes family recover from witnessing and experiencing something so traumatic at such a young age. We ask that you pray for his family, the Dragon family and let’s use this forum come together and figure out ways to make it be about our kids.”